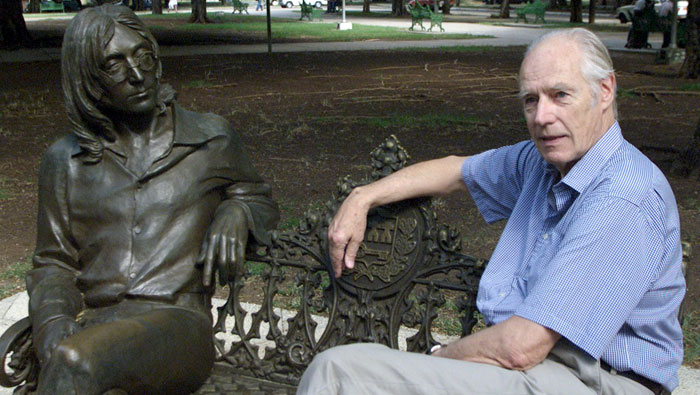 Los Angeles/London: George Martin, known as "the fifth Beatle" for his work in shaping the band that became one of the world's most influential music forces, has died at the age of 90.
He was considered the most successful music producer ever, cited in the Guinness Book of Records for having more than 50 No. 1 hit records over five decades in the United States and Britain alone.
He helped score, arrange, and produce many of the band's biggest hits, including "I Wanna Hold Your Hand," "A Day in the Life", "Yesterday", "Eleanor Rigby" and "Love Me Do".
"I'm so sad to hear the news of the passing of dear George Martin," Beatle Paul McCartney said in a statement on Wednesday.
"If anyone earned the title of the fifth Beatle it was George."
A statement from Martin's family confirmed he had died peacefully at his home on Tuesday evening.
Earlier, Ringo Starr, the Beatles' drummer, had announced his death on Twitter: "God bless George Martin peace and love to Judy and his family... George will be missed."
Starr followed the message by posting a black and white photo of the Fab Four with Martin, saying "Thank you for all your love and kindness George."
Martin served as producer, collaborator and mentor to Beatles John Lennon, George Harrison, McCartney and Starr.
Lennon was shot dead in New York in 1980. Harrison died of cancer in 2001.
Tributes from the music world poured in on Twitter. "RIP to my musical brother George Martin. We were friends since 1964, & I am so thankful 4 that gift," said American music producer Quincy Jones.
Lenny Kravitz said: "The legends are really going home!" Boy George said: "George Martin. Gentleman and legend", while Mark Ronson said Martin was "the greatest British record producer of all time."
Britain's Prime Minister David Cameron said on Twitter: "George Martin was a giant of music - working with the Fab Four to create the world's most enduring pop music."
During his seven-decade career in the music industry, Martin produced almost all of the Beatles' recordings and also worked with Gerry & the Pacemakers, Shirley Bassey, Cilla Black, Jeff Beck, America, Cheap Trick and other acts.
Martin started work at Abbey Road Studios in 1950 producing records for EMI's Parlophone label.
He was noted for his comedy recordings with the likes of Peter Sellers, Spike Milligan and Beyond the Fringe and got his first Number 1 with The Temperance Seven in 1961. He signed The Beatles in 1962.
The young band members were rough around the edges, but Martin saw their commercial promise and with them helped revolutionise the art of popular music recording.
His 1979 autobiography, "All You Need Is Ears", chronicles his discovery of the Beatles and their creative process.
Martin was knighted in 1996. In 2006, working with his son, Giles Martin, he helped develop the Beatles-inspired Cirque du Soleil show "Love" in Las Vegas, which went on to reap his two most recent Grammys.