US in talks to base long-range bombers in Australia 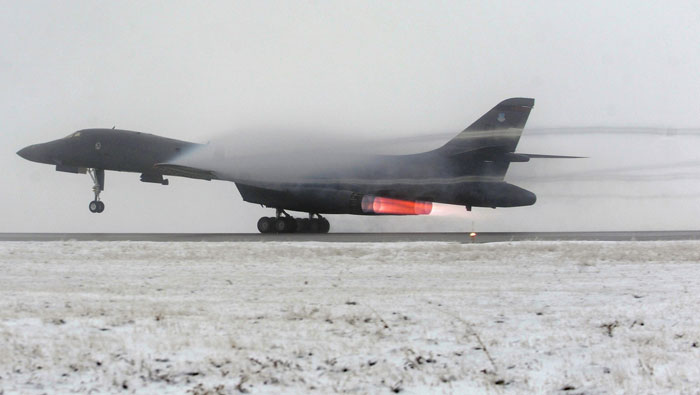 Sydney/Washington: The United States is in talks to base long-range bombers in Australia, US defence officials said, within striking distance of the disputed South China Sea, a move that could inflame tensions with China.
The deployments could include B-1 bombers and an expansion of B-52 bomber missions, said Lt. Colonel Damien Pickart, a spokesman for the US Air Force in the Pacific, stressing that discussions were continuing and no decisions had yet been reached.
"These bomber rotations provide opportunities for our Airmen to advance and strengthen our regional alliances and provide (Pacific Air Forces) and US Pacific Command leaders with a credible global strike and deterrence capability to help maintain peace and security in the Indo-Asia-Pacific region," said Pickart.
The United States does not currently fly B-1 bombers from Australia, but does conduct periodic B-52 missions.
Australian Prime Minister Malcolm Turnbull declined to comment on the discussions.
"I can just assure you that everything we do in this area is very carefully determined to ensure that our respective military forces work together as closely as possible in our mutual national interests," he told reporters on Wednesday.
Should an agreement be reached, it would position further US military aircraft close to the disputed South China Sea and risk angering China, analysts said.
"China will see it in the context of the (Australian Defence) White Paper which they have already mentioned that they expressed a certain degree of dissatisfaction," said Euan Graham, director of the International Security Program at Sydney-based think tank, the Lowy Institute.
China's Foreign Ministry expressed concern.
"Cooperation among relevant counties should protect regional peace and stability, and not target the interests of third parties," spokesman Hong Lei told a daily news briefing.
Australia last month committed to increase defence spending by nearly A$30 billion ($22 billion), seeking to protect its strategic and trade interests in the Asia-Pacific as the United States and its allies grapple with China's rising power.
The potential stationing of B-1 bombers in Australia was raised by US officials last year, but Australia's then Defence Minister said they had misspoken.
China claims almost all of the South China Sea, but Brunei, Malaysia, the Philippines, Taiwan and Vietnam have overlapping claims.
Tensions between the US and China have been inflamed in recent weeks.
The US Navy has carried out freedom of navigation exercises, sailing and flying near disputed islands to underscore its rights to operate in the seas.
Those patrols, and reports that China is deploying advanced missiles, fighters and radar equipment on islands there, have led Washington and Beijing to trade accusations of militarising the region.
General Lori Robinson, talking to reporters in Canberra, said the US would continue to conduct exercises through the disputed waterway, while calling on Australia to conduct similar freedom of navigation exercises.
"We would encourage anybody in the region and around the world to fly and sail in international air space in accordance with international rules and norms" the Australian Broadcasting Corporation quoted Robinson as saying.