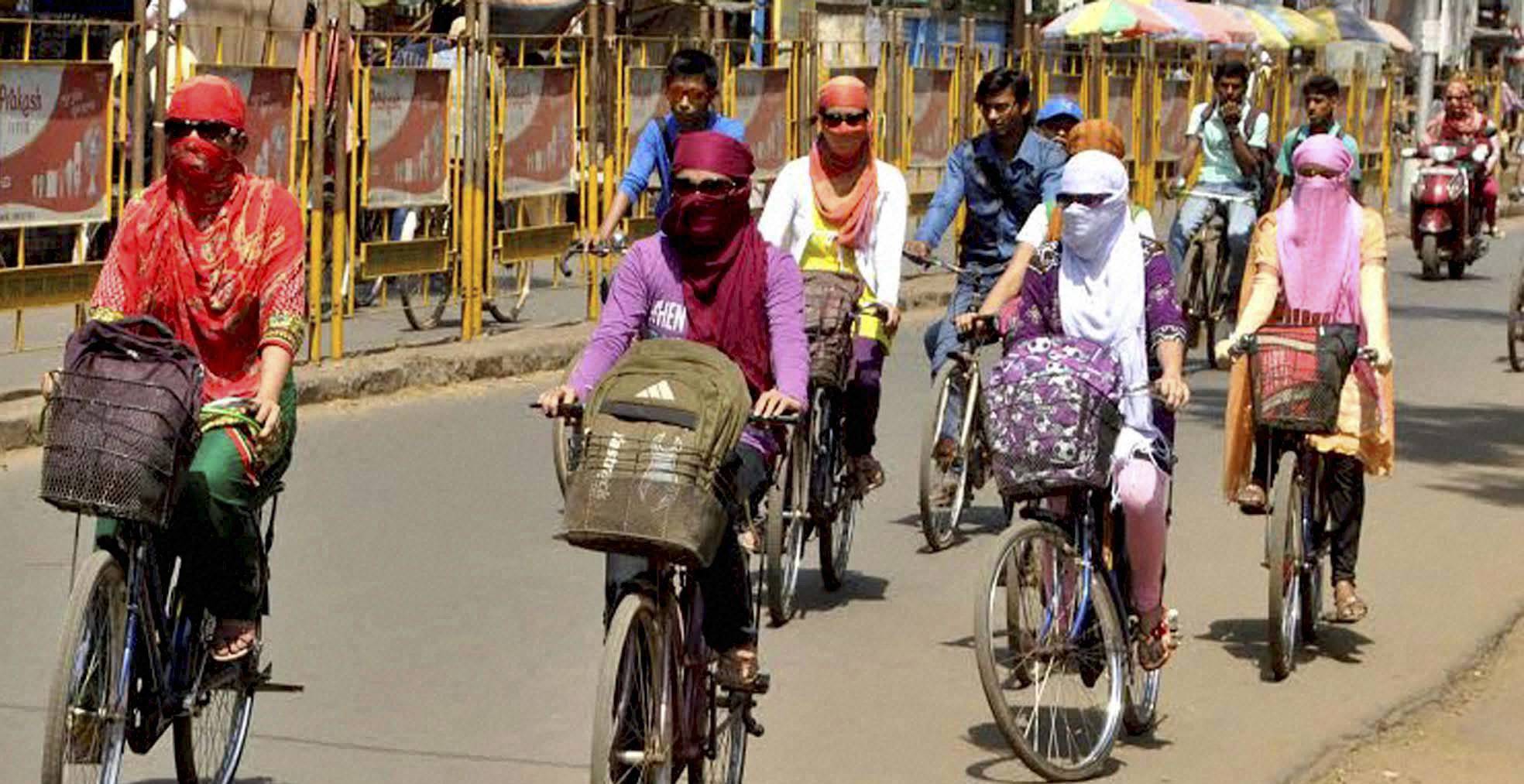 Kumari Behera carefully folds a set of heavy brown jute sacks, stacking them in a corner of her small, windowless shack. Splashed with water every two hours and arrayed on her tin roof, they have served as her air conditioning this summer - the only option available to cool her home in the face of increasingly brutal summer heat.
The 54-year-old is sure she'll need the sacks again next summer. This year temperatures in Bhubaneswar, a city near the coast in eastern India, did not reach last year's record mark of 46.8 degrees Celsius (116 degrees Fahrenheit). But stiflingly high humidity, combined with surging heat, nonetheless made city temperatures "feel" above 50 degrees Celsius in April and May, experts say.
Bhubaneswar, near the Bay of Bengal in India's Odisha state, is used to coping with sweltering summer temperatures of 36 to 40 degrees Celsius, experts say.
But temperatures above that, combined with the sultry humidity - which makes conditions feel 10 degrees Celsius hotter, according to the city's heat action plan - are rapidly making summers seem unbearable. And the heat is starting earlier.
March this year began with temperatures of nearly 38 degrees Celsius (100 degrees Fahrenheit), 4 degrees hotter than normal, according to the Indian meteorological office, which began issuing heat warnings in 15 Indian states that month.
"By mid-March the house was burning like my wood cookstove,” said Behera, who works as a domestic maid.
Her family, migrants from Odisha's cyclone-prone Ganjam district, squats with 11 other families on a legally disputed plot near the city’s bus stand.
"Most of us spent nights on straw mats outside the huts without even a sigh of a breeze anywhere, only able to sleep closer to dawn for around three to four hours," she said.
"Then we’d have to go inside because it was like sleeping on a public street - and we had to go for work anyway,” she said.
Lipika Nanda, a public health expert who leads the Indian Institute of Public Health in Bhubaneswar, said the city's poorest face the biggest challenges from rising heat.
"Slum populations are one of the most-at-risk groups to heatwaves in Bhubaneswar because not only are their living quarters overcrowded (but) the tin and asbestos roofs trap the heat, with additional heat coming from cooking on open, solid-fuel stoves,” she said.
Following a vulnerability assessment early this year, the institute helped develop a heat action plan for Odisha state, working with its disaster management authority. One problem that needs more attention, Nanda said, is how exposure to extreme heat is affecting people already suffering from ongoing health conditions.
"What is worrying is that presence of chronic conditions and chronic medication (which can) make already at-risk people up to four times more vulnerable to heat,” she said.
Respiratory diseases, high blood pressure, cardiac problems, skin infection and diabetes are chronic ailments commonly found in India's slums, according to a 2015 survey by the International Institute for Population Sciences.
The Indian Institute of Public Health found that ways of coping with increasing heat vary according to income, with many slum dwellers simply using whatever water is available to try to cool down.
To make that easier, Bhubaneswar since last summer has doubled the number of roadside water kiosks, a citizen's voluntary effort aimed at combatting worsening heat risks as heatwaves become longer and more frequent.
Behera said her son-in-law, who owns a three-wheeled auto-rickshaw - commonly used as taxis in India - had invested 1,000 rupees ($15.50) in a woven grass mat, which he puts on the vehicle's roof to cool passengers. Soaked with water, it makes the interior feel "cool as a day in spring", she said.
"There was never a day all this summer that he didn’t bring home 500 rupees ($7.75), a third more than others did," she said.
Curtains woven from the fragrant roots of vetiver grass - known locally as "khus" - are traditionally used as natural air conditioners during India’s hot summers, hung wet in doorways to cool the incoming air. Access to electricity, however, can be even more effective.
Slum families who have access to power and a fan or air cooler halve their risk of heat illness, a study by Bhubaneswar's public health institute found. Since the record-breaking summer of 2016, the city also has tried to cut heat risks, particularly for the poorest, by keeping 28 municipal parks open in the hottest part of the day.

For women, however, the biggest risks can be at home, over the cookstove, health officials said. Many face an impossible choice between cooking inside in the shade, turning their one-room home into an oven, or cooking outside, which exposes them to heat stroke, the officials said.
Summer is also a time of higher fire risk in many of Bhubaneswar's more than 430 slums, either from cooking stoves or short-circuiting illegal electrical connections.
With 400,000 people - 40 per cent of the city's population - living in just 5 per cent of its geographical area, fires can race through closely packed shacks in minutes. Rural communities in Odisha’s hottest districts, including Talcher and Angul, have for over 60 years carried out community-based fire prevention campaigns.
Such efforts need to be replicated in urban slums, particularly as heat worsens, several non-governmental organisations suggest. Community-developed laws in several of the villages in Talcher and Angul also limit cooking to the morning, with a requirement that fires be out by 11am.
A bucket of water also must be kept on every home's front verandah to allow a quick response in case of fire.
A two-member team monitors compliance, with rule-breakers fined 50 rupees, equal to one day’s rice consumption for an average family.
Such measures are likely to become more important as summer temperatures continue to rise, officials say. - Thomson Reuters Foundation