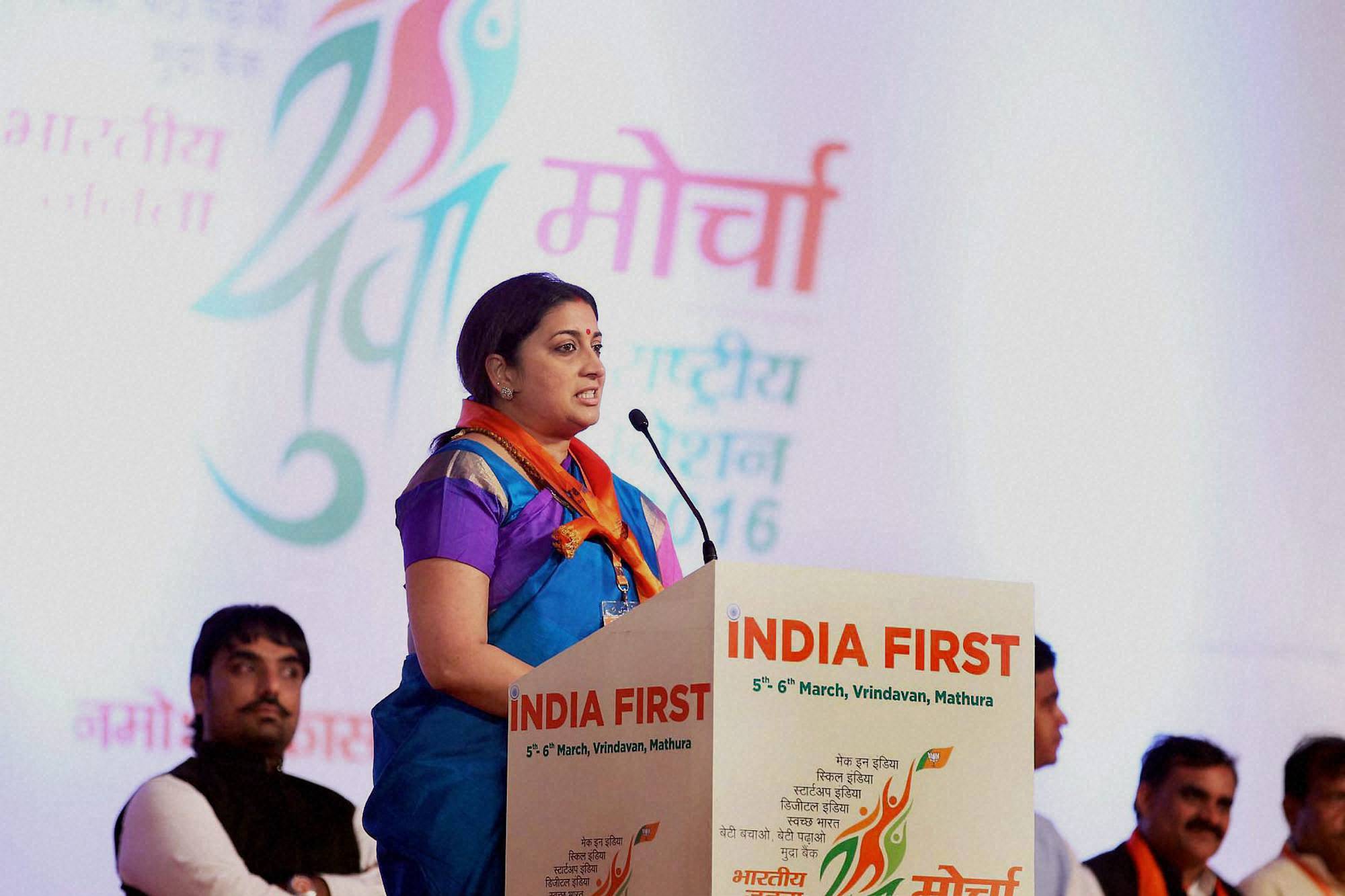 New Delhi: After Hyderabad varsity and Jawaharlal Nehru University, Allahabad University was at the centre of a row that escalated on Tuesday with eight Opposition parties targeting Human Resource Develpoment Minister Smriti Irani over alleged harassment of its Student's Union President, accusing her of acting like Akhil Bharatiya Vidyarhi Parishad's "patron saint".
"We are agonized over the fact that the first ever lady President of Allahabad University Student's Union Richa Singh, a PhD scholar, is being harassed by the administration...," the parties that included Congress, Left and AAP said in a joint statement.
CPI general secretary S. Sudhakar Reddy separately asked the BJP-RSS combine to "keep off" Allahabad University, alleging that Rashtriya Swayamsevak Sangh students wing ABVP was trying to "saffronise" it after "targeting" JNU and HCU, and sought action against those trying to "create tension" at its campus.
K. C. Tyagi of Janata Dal (United) raised the issue of the "authoritarian attitude" of Allahabad University Vice-Chancellor during Zero Hour in Rajya Sabha, saying Richa Singh had written to all MPs on the matter and about gender insensitivity. "First we saw the sacrifice of Rohith, then the Kanhaiya episode and now Richa Singh episode is in the process."
Drawing parallel with Dalit scholar Rohith Vemula's suicide in Hyderabad University and the JNU row involving Kanhaiya Kumar's arrest, leaders from the eight parties in the joint statement trained their guns on Irani, reminding her that she is a minister of the entire country and not just the RSS and BJP.
Jairam Ramesh and Rajeev Shukla (Congress), Sitaram Yechury (CPI-M), D Raja (CPI), K. C. Tyagi (JD-U), Javed Ali Khan (Samajwadi Party), Tiruchi Siva (Dravida Munnetra Kazhagam), Bhagwant Mann (Aam Aadmi Party) and Jaiprakash Yadav (Rashtriya Janata Dal) were signatories to the statement.
"A government, which refuses to learn that autonomy of education institution is foundation of democracy, is sowing widespread discontent in campuses by its blatant support to ABVP's goondaism," they said.
Noting that Richa Singh had won as an independent candidate in Allahabad University while all the other seats were won by ABVP (Akhil Bharatiya Vidhyarthi Parishad), the leaders claimed she was in the eye of the storm for protesting against a visit of firebrand BJP MP Yogi Adityanath to the campus.
"ABVP members allegedly attacked the protesters but instead of investigating the attack, an enquiry was set up on Richa Singh herself. Further, there is a move now by the Vice Chancellor to declare her admission null and void, using some technical grounds, in order to get rid of what appears to be the only thorn in ABVP's side. "We are aghast that University administration across the region are hunting students, who have a different view than the ABVP," they said.
Alleging that the HRD Minister is acting like the "patron saint of ABVP", they said, "we wish to remind her that she is a minister of this vast, diverse country and not just the RSS/BJP. "It is her responsibility to encourage and protect all Constitutional freedoms in University campuses. If Richa Singh is made a victim of ABVP's diktats, on the heels of Rohith Vemula and Kanhaiya Kumar, then the students of this nation will be forced to rise in revolt," the statement added.