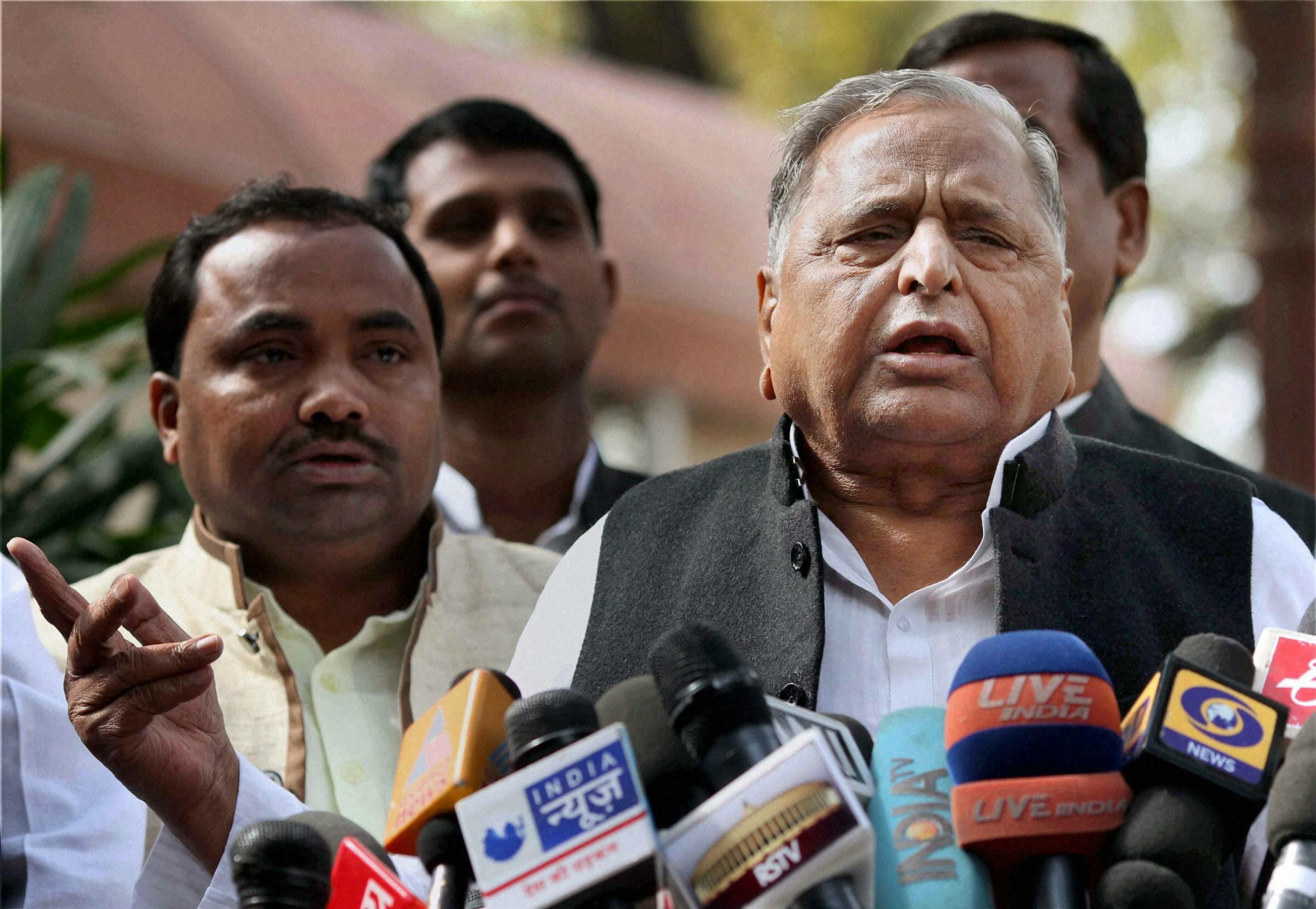 Lucknow: In a crucial turn of events in the battle for supremacy in the Samajwadi Party, Mulayam Singh Yadav is likely to announce a new outfit on Monday along with virtually defunct Lok Dal, and retain the 'samajwadi' tag in its name, sources in the two parties have indicated.
The hint of an imminent split in the SP came on Sunday when Mulayam and his brother-aide Shivpal Yadav stayed away from a state convention of the party -- which they had founded 25 years ago -- saying they were not invited.
"Mulayam will hold a press conference at the Lohia Trust office here tomorrow to announce a new party with Lok Dal," Lok Dal president Sunil Singh told PTI on Sunday.
He said the word 'samajwadi' (socialist) will be retained in the name of the new party. Even as the SP prepared for the convention, sources said the two brothers pondered over formation of a secular front under the banner of Lok Dal, hinting fresh differences in the party weakened already by the factional feud which proved to be its nemesis in the Assembly polls earlier this year.
The strains were palpable ahead of its state and national convention, with Mulayam replacing Akhilesh Yadav-loyalist Ram Gopal with Shivpal Yadav as the secretary of the Lohia Trust. Shivpal had announced in June that he would float the Samajwadi Secular Front "to fight communal forces".
"As there is no sign of any truce, it is a crucial time for Shivpal to decide his future course," a close confidant of Shivpal said.
Asked about Singh's claims that the two brothers will work under the banner of Lok Dal, another Shivpal-loyalist said, "Mulayam may not like to shun the Samajwadi tag. The situation will be clear tomorrow when netaji (Mulayam) will disclose his future course of action."
The posters at the SP convention here on Saturday did not have pictures of Mulayam and Shivpal, giving ample hints about their place in the party. The convention saw a realignment of forces within the SP as senior leader Azam Khan attended the event and lashed out at the "people who have betrayed the party", in an apparent reference to Shivpal, his one-time friend and confidant.
Another surprise presence was that of SP MP Beni Prasad Varma, whose inclusion in the party last year was said to have triggered the battle within the family. To top it all, SP president Akhilesh Yadav in his address on Saturday cautioned his supporters against "fake samajwadis".
As in the past, Akhilesh, however, struck an emotional note when he said, "Netaji (Mulayam) is my father and this party (SP) belongs to him. His blessings are with us and we will carry forward his legacy. My father has always been with us and will remain with us."
In Election Commission records, Lok Dal is a registered, unrecognised party that was formed by veteran socialist leader Charan Singh way back in 1980 and Mualayam was its founder-member.

Lok Dal has the old election symbol of farmer ploughing the field (khet jot-ta kissan). Fighting on the symbol, Charan Singh had become the chief minister of Uttar Pradesh.
Mulayam, who was opposed to the SP-Congress alliance during the Assembly elections, was offered Lok Dal symbol and president's post by Sunil Singh. "A number of Shivpal loyalists had contested on Lok Dal ticket during the assembly polls and the party used Mulayam's photographs for campaigns, terming him a true samajwadi," the Lok Dal president said.
The Yadav family feud came to the fore about a year ago and led to Akhilesh snatching the mantle of the SP national president from his father at an emergency national convention of the party here on January 1.
Taking full control of the party after being crowned as its head and alloted the 'bicycle' symbol by the EC on January 16, Akhilesh has been going whole hog consolidating his grip over the party.