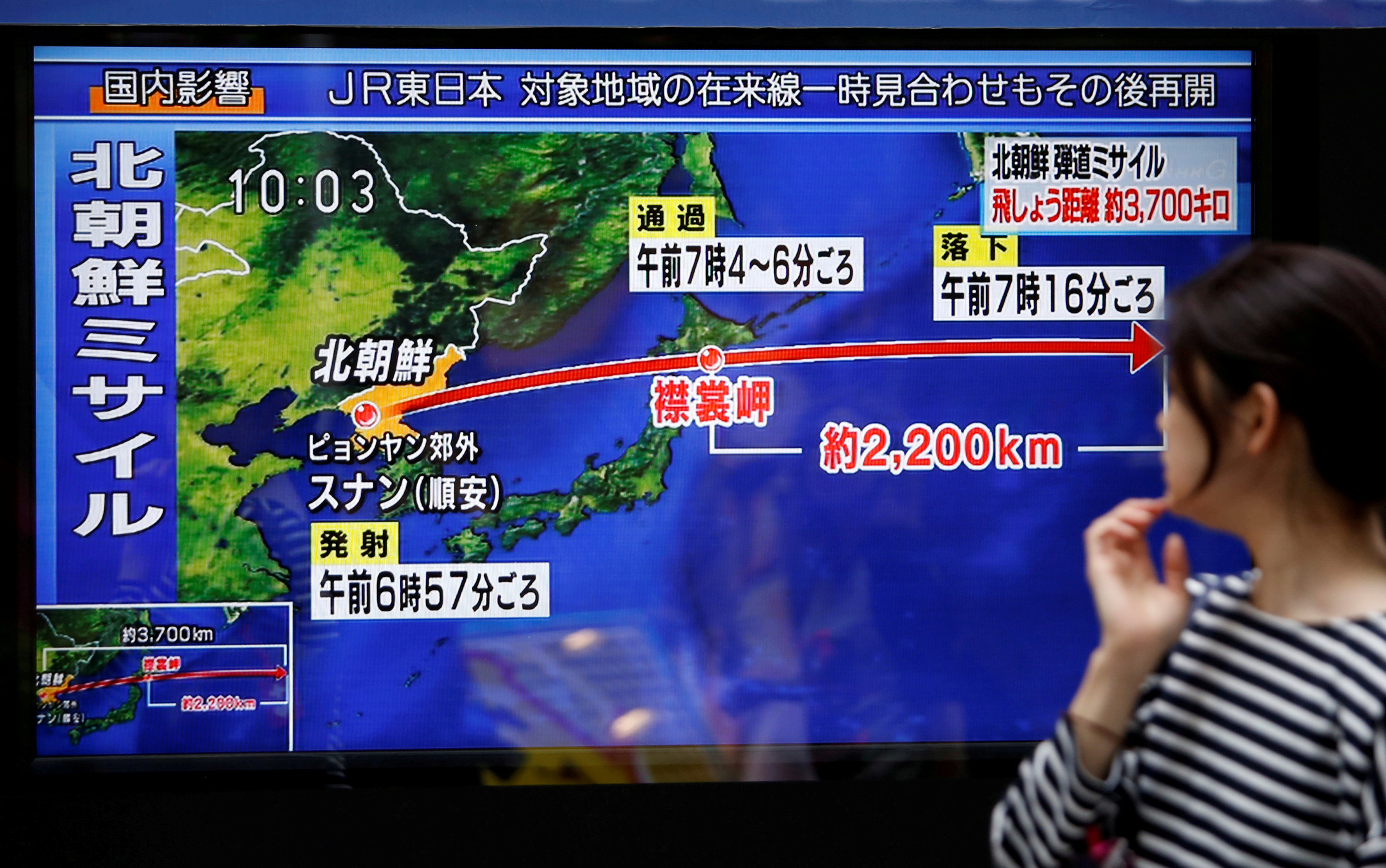 Seoul/Tokyo: U.S. President Donald Trump's speech to the United Nations, where he warned he would "totally destroy" North Korea if threatened, reinforced the need for Pyongyang to realise it must give up its nuclear weapons, South Korea said on Wednesday.
In a hard-edged speech to the United Nations General Assembly on Tuesday, Trump mocked North Korean leader Kim Jong Un as a "rocket man" for his repeated ballistic missile tests.
"We view the speech as portraying a firm and specific stance on the key issues regarding keeping peace and safety that the international community and the United Nations are faced with," the office of South Korean President Moon Jae-in said in a statement on Wednesday.
"It clearly showed how seriously the United States government views North Korea's nuclear programme as the president spent an unusual amount of time discussing the issue," the presidential Blue House's statement said.
Trump's speech "reaffirmed that North Korea should be made to realize denuclearisation is the only way to the future through utmost sanctions and pressure", it said.
Moon came to power in May on a platform of more engagement with North Korea. Since Pyongyang's sixth and largest nuclear test earlier on September 3, however, Moon has said the time is not right for dialogue.
He and Trump plan to meet in New York early on Wednesday U.S. time, Moon's office said.
Trump's most direct military threat to attack North Korea was his latest expression of concern about Pyongyang's repeated weapons tests.
"The United States has great strength and patience, but if it is forced to defend itself or its allies, we will have no choice but to totally destroy North Korea," Trump told the 193-member world body. "Rocket man is on a suicide mission for himself and his regime."
U.S. ally Japan, which Pyongyang often threatens to destroy, has taken a consistently hard line on North Korea, pushing for increased sanctions and pressure.
"We greatly appreciate President Trump’s approach to changing North Korea’s policy stance, denuclearising the country and calling on the international community, including China and Russia, for their cooperation toward strengthening pressure on North Korea," Chief Cabinet Secretary Yoshihide Suga told reporters.
Suga also welcomed Trump's reference to a Japanese girl who was kidnapped by North Korean agents in 1977.
The plight of abuctees is a key issue for Japanese Prime Minister Shinzo Abe, who has pledged to rescue them while in office, and an emotive one for the Japanese public.
North Korea admitted in 2002 it had kidnapped 13 Japanese in the 1970s and 1980s to train spies. Five of them returned to Japan but Tokyo suspects that hundreds more may have been taken.
North Korea, which has conducted more than 80 missile tests under third-generation leader Kim, says it needs its weapons to protect itself from U.S. aggression. South Korea and the United States are technically still at war with North Korea after the 1950-53 Korean conflict ended with a truce, not a peace treaty.
U.S. Secretary of State Rex Tillerson, interviewed by Fox News on Tuesday, highlighted Washington's policy of pressuring North Korea through sanctions.
"We have the strictest sanctions ever put in place. We do believe there are early signs of those having an effect," he said. "Ultimately, though, we're going to need the assistance of the neighbours in the region."
The U.N. Security Council has unanimously imposed nine rounds of sanctions on North Korea since 2006, the latest earlier this month aimed at restricting fuel supplies and cutting off textile exports, a key foreign exchange earner.
The United States has urged China, North Korea's main ally and trading partner, and Russia to do more to rein in Kim, something Trump appeared to allude to in his speech.
"It is an outrage that some nations would not only trade with such a regime but would arm, supply and financially support a country that imperils the world with nuclear conflict," Trump told the General Assembly.
China's Foreign Ministry, asked to respond to Trump's comments about destroying North Korea if it had to, said U.N. resolutions were clear the Korean peninsula issue should be resolved peacefully through political and diplomatic means.
The resolutions passed by the U.N. Security Council on North Korea reflected the "common will and consensus of the international community" to denuclearisation of the Korean Peninsula, Ministry spokesman Lu Kang told a regular briefing.