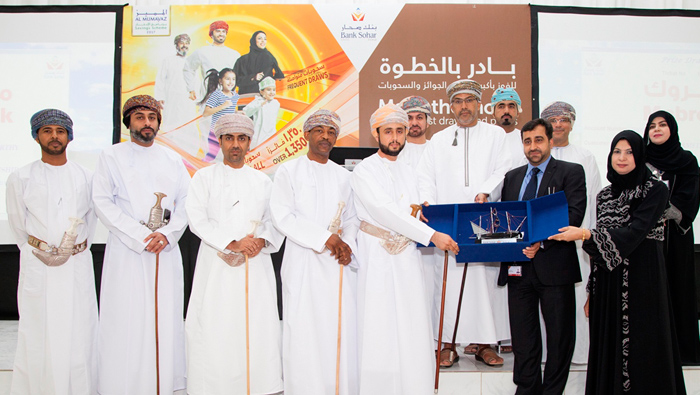 Muscat: Bank Sohar’s Al Mumayaz Savings Scheme 2017 continues to be a tremendous success with customers, entering its sixth round of monthly draws for the year.
The monthly draws for the month of August were conducted during a VIP gathering at Noor Al Bedaya Hall in Wilayat of Saham recently, under the auspices of Eng. Mohammed bin Khamis Al Badi, Member of Shura Council and Representative of Wilayat of Saham. The draws awarded 32 lucky winners cash prizes totalling OMR45,000. These included a General Draw for OMR10,000, Children’s draw for OMR1,000 and a Female Draw for OMR5,000. Additionally, the dedicated Branch Draws, which saw one winner from each of the bank’s 29 branches win OMR1,000 each, were conducted earlier at the bank’s head office in Muscat.
Representing Bank Sohar and welcoming invitees at the gathering were Rajeev Arora, DGM & Head of Retail Banking; Khamis Masoud Al Rahbi, Sr. AGM of Retail Banking; Mazin Mahmood Al Raisi, Senior AGM - Marketing & Customer Experience; Rashid Saif Said Al Maskry - District Manager of the Batinah Region, Badriya Sultan Al Jahwari, Senior Manager Saham Branch and other senior members of the bank.
Commenting on the event, Rajeev Arora, DGM and head of Retail Banking at Bank Sohar said, “On behalf of Bank Sohar, I would first like to congratulate the winners and thank our esteemed guests for being present here this evening, as we conduct our sixth successful monthly draw. Their presence further strengthens our bank-client relationship and reinforces our commitment to our customers. The Al Mumayaz Savings Scheme has been tremendously successful as shown by the numerous lucky winners we have announced in the past. This year alone we have had more than 800 winners so far, and this number will increase to approximately 1,350 by year-end. One of the reasons why the scheme has been so successful is that is rewards people for being financially prudent. As a financial institution, we want to inculcate this habit among our customers by giving them a product that meets their financial needs as well as motivates them to save for their as well as their family’s future.”
Emphasising the Bank’s commitment to innovative product research and development, Khamis Al Rahbi said, “We have always focused on developing products and services that not only enhance customers’ banking experience but also guarantee them competent value additions in terms of diversity, alacrity and complete lifecycle solutions. Along with our other innovative products, the savings scheme’s success reflects Bank Sohar’s dynamic position in the Oman’s Banking sector underpinned by its strong commitment to prioritise and fulfill customers’ needs beyond their expectations. I would like to congratulate the winners of this month’s draws and encourage all our customers to continue saving as the more they save, the better their chances of winning in the remaining draws.”
The event commenced with a welcome note by Badriya Sultan Al Jahwari followed by a speech by Mazin Al Raisi highlighting the various milestones and achievements of the bank. The speech was followed by a short documentary video highlighting the bank’s milestones and achievements of the past ten years. The event then saw the recitation of a poem about Bank Sohar by Poet Sultan Al Issai. This was followed by a brief overview by Redha Al Lawati on the Al Mumayaz Savings Scheme 2017 and an outline of each of the draws that were to be conducted. In addition, an audience raffle draw was held where some lucky attendees walked away with exciting prizes.
Following the presentation, the draws were conducted starting off with the Children’s Draw which saw Noor Al Jamoudi (Minor)from Nizwa Branch, win OMR1,000. The Female Draw followed, which saw K. Al Thuhli from Nizwa branch win OMR5,000. The final draw of the day was the general draw, which saw Rashid Al Harthy from Privilege Banking Branch win OMR10,000.
The monthly branch draws, which were conducted earlier at the bank’s head office in muscat, witnessed a customer from each of the bank’s branches win OMR1,000.
This included Kamal Khanas the winner from the Al Buraimi Branch, Farida Al Hadhrami from the Al Azaiba Branch, Khamis Al Nofli from the Sohar Branch, Ahmed Al Awaisi from the Barka Branch, Khalifa Al Ghafrifrom the Ibri Branch, Sulaiman Al Hosni from the Al Khaboura Branch, Jamila Al Habsi from the Al Qurum Branch, Jenan Al Zadjali (Minor) from the Al Khoudh Branch, Dilavar Ali from the Sinaw Branch, A. M. H. from the Privilege Banking Branch, Ali Mohammed from the Salalah Branch, Srinivas Chowdary from the MBD Branch, I. Z. from the Al Seeb Branch, Yasser Al Alawi (Minor) from the Sur Branch, George Mathew (Minor) from the Al Khuwair Branch, W. Al Harthi from the Ibra Branch, Ibtisam Al Toubi from the Nizwa Branch, Amran Al Wahibi (Minor) from the Ruwi Branch, Humaid Al Badwawi from the Shinas Branch, Al Anood Al Naabi (Minor) from the Suwaiq Branch, Tariq Al Wahaibi from Al Quriyat Branch, Khamis Al Saadi from the Jaalan Bani Bu Ali Branch, Ali Al Minji from the Al Amerat Branch, Omimah Ahmed Al Abri (Minor) from the Bahla Branch, Fahad Al Alawi from the Avenues Mall Branch, Mohammed Al Hatmi from the A’Rustaq Branch, Abdullah Mohammed from the Saham Branch, Khalid Al Harassi from the Mabella Branch and finally A. M. S., from the Musannah Branch.