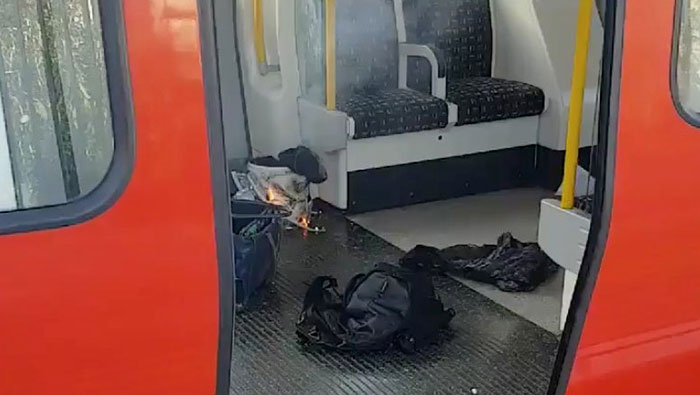 London: An improvised explosive device exploded on a packed rush-hour commuter train in london injuring 22 people on Friday in what police said was the fifth terrorism incident in Britain this year.
Here is what we know about the incident:
Timeline
Emergency services said they were called to reports of a fire on a train at Parsons Green station in West london at 8.20 a.m. (0720 GMT).
The train was travelling from Wimbledon in south london towards the city centre during the morning commuter rush-hour.
There were reports in local media that there had been an explosion and people suffered facial burns at 8.40 a.m.
At 10.15 a.m., police declared they were treating it as a terrorism-related incident.
The london Ambulance service said they had taken 18 people to hospital following the incident, which witnesses say prompted a stampede to leave the train. None of the casualties are suspected to have sustained serious injuries.
The National Health Service said others had taken themselves to hospital, bringing the total number treated to 22.
london fire brigade said six fire engines, two fire rescue units and about 50 firefighters were in attendance.
British Prime Minister Theresa May will chair a meeting of the national security committee at 1.00 pm (1200 GMT).
The device
Britain's top counter-terrorism officer said the blast was the result of an improvised explosive device.
Pictures shared on social media showed embers burning from a white bucket which had been wrapped in a plastic shopping bag. Wires were protruding from the bucket and witnesses described an acrid smell filling the carriages.
A former Ministry of Defence Head of Counter-Terrorism told Sky News it "looks a pressure cooker device that has malfunctioned." The broadcaster also reported that the device did not fully detonate.
The investigation
The Metropolitan Police's counter terrorism unit is leading the investigation into the incident, with support from the British Transport Police.
Mark Rowley of the Metropolitan Police said the intelligence services were supporting the police response.
There have been no details or information about any suspects who might be linked to the blast.
Rowley would not be drawn on whether the attacker was on the train at the time of the explosion.
"It's very much a live investigation, and we're following down the lines of enquiries," Rowley said.
He did not comment when asked if he had any idea who did it.