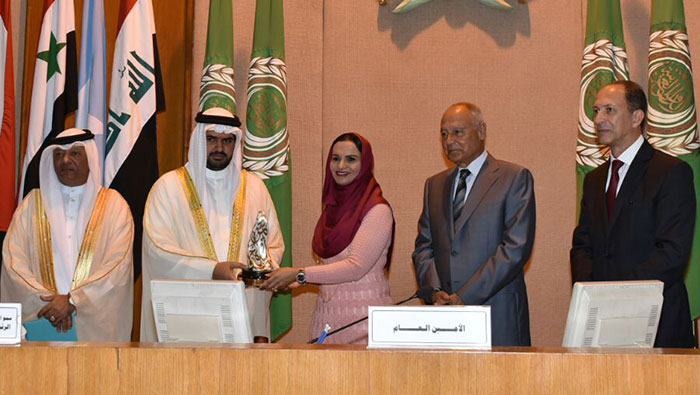 The award was received on behalf of Sheikh Suhail by his daughter Amal bint Suhail Bahwan. Sheikh Isa bin Ali, Honorary President of Al Kalaimah Al Tayiba Society, stressed the importance of volunteerism as one of the fundamental factors in humanitarian work since the beginning of the new millennium.

He added that the progress of countries is measured by its voluntary initiatives that reflect the awareness and understanding among its citizens of the importance of integrating the community role with development plans, which are adopted by governments in these countries and reflects the official authorities’ adoption of these initiatives, which allows them to move positively to fill the development gaps in some areas that may not be covered by government work programmes.

During the ceremony, the Secretary General of the Arab League, Ahmed Aboul Gheit, the Social Affairs Assistant Ambassador Bedridden Alali, the Ambassador of the Kingdom of Bahrain to Egypt, the Permanent Representative of the Arab League Rashid Abdul Rahman al- Khalifa and a number of personalities were honored.

Secretary General of the Arab League stressed the league’s keenness to strengthen and support the role of civil society and voluntary work in order to achieve the desired development in various areas of community development, such as health, education, eradication of poverty and the promotion of political participation and other areas related to the main challenges faced by the Arab region.