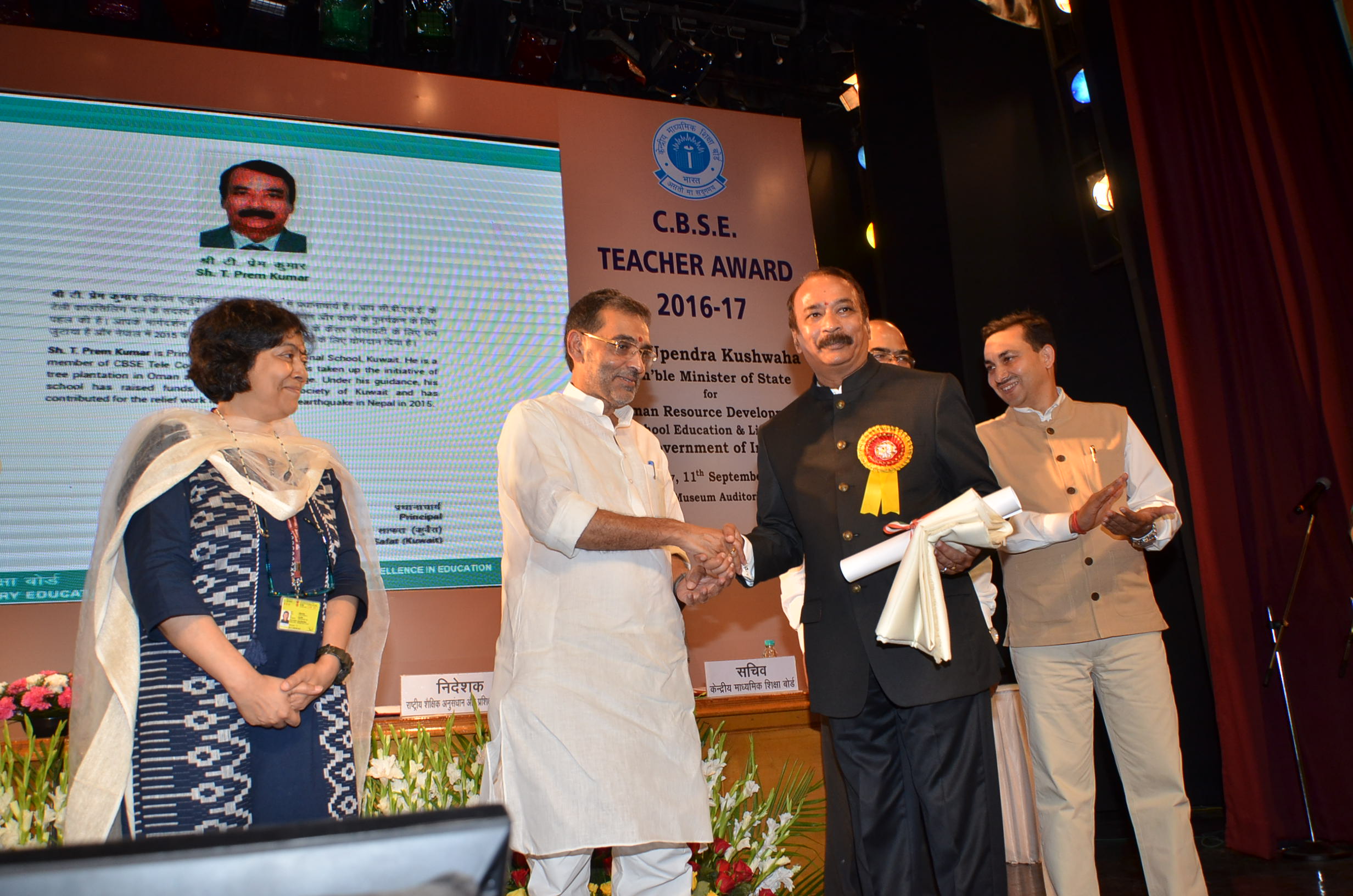 Muscat: "Success is no accident. It is hard work, perseverance, learning, studying, sacrifice and most of all, passion for excellence". This dictum is true about T. Premkumar, one of the most successful CBSE principals in the Middle East and the former principal of Indian School Seeb. His immense contribution to the field of education has now earned him the most coveted 'CBSE Teachers’ Award 2016' instituted by the CBSE to acknowledge the outstanding efforts of the great educators.
The CBSE award ceremony was held recently in Delhi in the presence of newly appointed CBSE Chairperson Anita Karwal IAS, Member Secretary NCTE Sanjay Awasthi, Director NCERT Dr Hrushikesh Senapaty, Secretary of CBSE Anurag Tripathi and several other distinguished dignitaries from the MHRD, representatives of NVS, KVS and government schools.
The Minister of State for Human Resource Development (HRD), Government of India, Upendra Kushwaha felicitated the Central Board of Secondary Education (CBSE) teachers for their contribution to the field of education. Thirty-three teachers from across the country and abroad were conferred CBSE award for their innovations in classroom teaching for the year 2016-17. The selection of the awardees is based on the academic efficiency and improvement, interest, reputation in the community, perseverance, and commitment towards education, said a statement from CBSE. Premkumar stands tall among the awardees as he was the only awardee from abroad.
Premkumar began his career as a research assistant at the Indira Gandhi Atomic Research Centre, Chennai. He worked there extensively and exhaustively on reprocessing the spent fuel. His diligence enabled him to work on ‘the extraction of uranium in spent fuels’ at the Tarapur Nuclear Reactor, Mumbai, India. However, he forsook the well-paid government job to follow his heart and to become a teacher. He found little happiness in dealing with exanimate chemical elements and decided to pursue his dream. Without a pinch of regret, he resigned the lucrative job and embraced pedagogy wholeheartedly.
The newly recruited middle school teacher rose to the rank of a senior PGT within no time and in due course of time, he was promoted to the position of the Head of the Faculty, Department of Chemistry following his ascension to the position of the vice principal of the higher secondary section of one of the largest co-educational school in the Gulf region – Indian School Muscat. The enthusiasm for the progress of the school and utmost dedication were rewarded fittingly. Premkumar was unanimously chosen to lead the Indian School Al Seeb in Muscat. It is indeed a matter of pride for the awe-inspiring educator that he was the only homegrown administrator of ISM till date. His contribution to the field of private education in Muscat, Oman earned him a letter of commendation from Simmon’s College, Boston, USA.
He was entrusted with the responsibility of the then budding Al Seeb School in Muscat by the management. He took charge of the school as the principal and helped the school become one of the best schools in Oman today.
His love for sports never ceased. On the other hand, his love for sports and games reached its pinnacle during his tenure in the Indian School, Muscat. He represented Indian Schools in Oman Cricket League and played at the Division level. He was also the founding member of Vigyan Bharati (Science India Forum) and remains as the educational advisor
Premkumar also served the CBSE Muscat Chapter as the Educational adviser. He was nominated as the convener of the Oman Chapter for two years consecutively. Another feather in his cap was when the Indian school board of governors as their trainer for the subject Chemistry chose him for all the teachers of Chemistry in Muscat. “I pay tribute to the five principals in Oman with whom I worked. They taught me the various attributes to be a successful teacher and an efficient administrator,” said Premkumar.
The educational visionary of our times – N. K. Ramachandran Menon (The Chairman, Bhavans Middle East, Abu Dhabi) is the guiding spirit behind Premkumar. Premkumar gratefully acknowledges his invaluable guidance in transforming Bhavans Kuwait into a school with a vision and a mission for the global learners of the 21st century. “My award is dedicated to my chairman, N. K. Ramachandran Menon,” said a grateful Premkumar when asked whom he would dedicate his award to. He also added that he owed his success to his highly professional team at IES – pedagogues par excellence and the most talented students of Bhavans Kuwait apart from his dear family members.
“I always valued somebody calling me a teacher more than being called a principal or an administrator.” “My first love is teaching,” said the proud awardee.