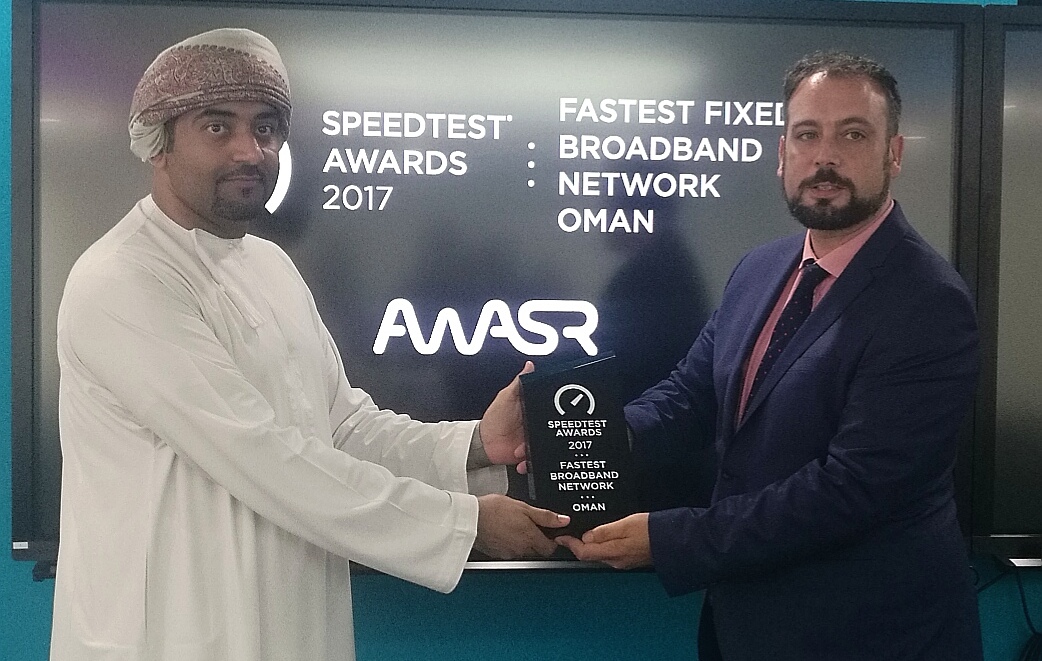 Muscat: Awasr, Oman’s premier provider of specialised broadband internet services, has been crowned as the country’s fastest fixed broadband network.
The young service provider was awarded as 'Oman’s Fastest Fixed Broadband Network' by Ookla, the company behind Speedtest, which is recognised as the global leader in internet testing and analysis.
The award was received by AbdulMonem Al Futaisi, Awasr’s COO from Ookla, in the presence of Awasr’s top management and executives, corporate clients, Ookla representatives and media personnel, at a ceremony held at the Sheraton Hotel that celebrated the partnership between Awasr and SAP to drive digital transformation across the country.
The award is a major milestone for Awasr, which has earned the distinction of being the fastest fixed service provider in the shortest span of time. Awasr was chosen following a series of tests and analysis to measure its speed veracity. Having launched its operations in March 2016, Awasr has wasted no time in meeting its set targets, even crossing the established parameters to reinvent the concepts of speed for users in and around Muscat, with its fibrenet packages.
Speaking on the occasion, AbdulMonem called it a validation of Awasr’s unprecedented growth in the country. "Team Awasr stands tall today. We are proud to be branded by an esteemed organisation such as Ookla as the fastest fixed broadband network in the country. It is the result of all our hard work in the last one and a half years to reach this milestone. We have, since the day we launched Awasr on March 21, 2016, worked tirelessly to meet every challenge and fulfil every objective set on our agenda, most importantly, to widen our network and assure our customers the availability of speed and choice that suits their needs," he commented.
"Congratulations to Awasr for winning the 2017 Speedtest Award for the Q1Q2 2017 award period! This award recognises Awasr’s commitment to delivering fast speeds and a strong network of their customers across Oman. Awasr achieved a Speed Score of 23.21 with top speeds of 50.41 Mbps for download and 27.53 Mbps for upload. Speedtest Intelligence data is comprised of millions of consumer-initiated tests performed on the web and mobile Speedtest platforms. All providers in Oman are represented in Speedtest Intelligence data, with significant volumes of tests nationwide. We can confirm that Speedtest Intelligence data supports the award for 'Oman’s Fastest ISP'," said Doug Suttles - general manager and CEO of Ookla.
Highlighting Awasr’s growing credentials, Issam Al Ismaily, Awasr’s head of Commercial, said, "From a humble start that brought Al Khoudh, Al Mawaleh, Al Hail, Mabela and Shatti Al Qurum under its network in the first phase, Awasr has grown in miles, literally, having spread its fibrenet broadband to several new destinations in and around the capital. This itself is a testimony of our growth and our speed dictum. We stand committed to our cause of giving our customers an internet lifestyle that is determined by speed – at all times. With Ookla’s recognition, our customers have all the more reason to rejoice with us."