U.N. warns of catastrophe as Rohingya exodus in Myanmar nears 150,000 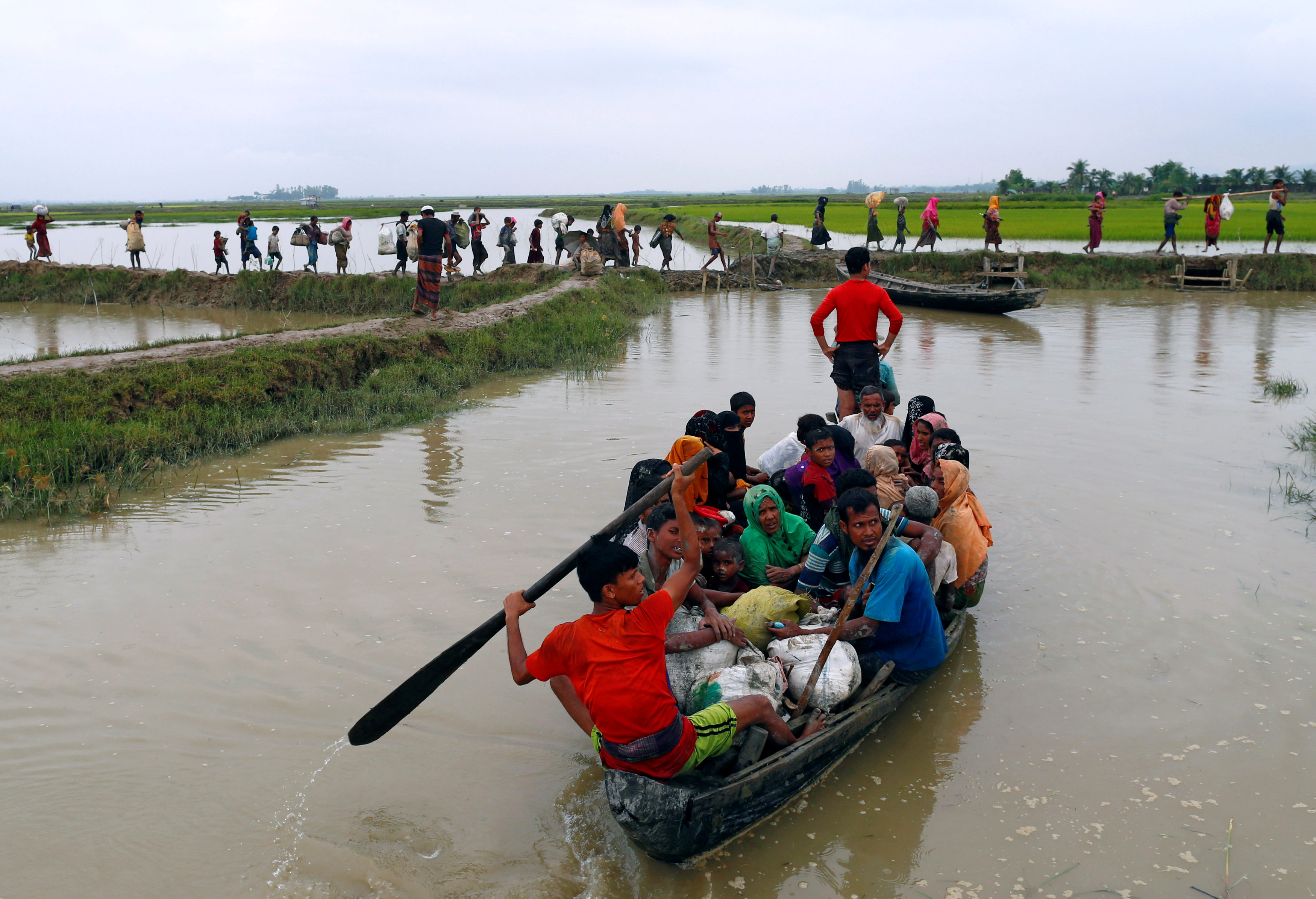 Yangon/Shamlapur (Bangladesh): Nearly 150,000 Rohingya Muslims have fled Myanmar for Bangladesh in less than two weeks, officials said on Wednesday after the United Nations chief warned there is a risk of ethnic cleansing in the former Burma that could destabilise the wider region.
Myanmar leader Aung San Suu Kyi blamed "terrorists" for "a huge iceberg of misinformation" on the violence in Rakhine state but she made no mention of the exodus of Rohingya since violence broke out there on August 25.
She has come under increasing pressure from countries with Muslim populations, including Indonesia, where thousands led by hardline groups held a rally in Jakarta on Wednesday, to demand that diplomatic ties with Buddhist-majority Myanmar be cut.
In a rare letter to the U.N. Security Council on Tuesday, Secretary-General Antonio Guterres expressed concern that the violence in Rakhine could spiral into a "humanitarian catastrophe".
Reuters reporters in the impoverished Cox's Bazar region of neighbouring Bangladesh have witnessed boatloads of exhausted Rohingya arriving near the border village of Shamlapur.
According to the latest estimates issued by U.N. workers operating in Cox's Bazar, arrivals in just 12 days stood at 146,000. This brought to 233,000 the total number of Rohingya who have sought refuge in Bangladesh since last October.
Newly arrived Rohingyas told authorities that three boats carrying between them more than 100 people capsized in the early hours of Wednesday. Coast guard Commander M.S. Kabir said six bodies, including three children, had since washed ashore.
The surge of refugees - many sick or wounded - has strained the resources of aid agencies and communities already helping hundreds of thousands from previous spasms of violence in Myanmar. Many have no shelter, and aid agencies are racing to provide clean water, sanitation and food.
"People have come with virtually nothing so there has to be food," a U.N. source working there said. "So this is now a huge concern - where is this food coming from for at least the elderly, the children, the women who have come over without their husbands?"
Suu Kyi spoke by telephone on Tuesday with Turkish President Tayyip Erdogan, who has pressed world leaders to do more to help a population of roughly 1.1 million he says are facing genocide.
In a statement issued by her office on Facebook, Suu Kyi said the government had "already started defending all the people in Rakhine in the best way possible" and warned against misinformation that could mar relations with other countries.
She referred to images on Twitter of killings posted by Turkey's deputy prime minister that he later deleted because they were not from Myanmar.
"She said that kind of fake information which was inflicted on the deputy prime minister was simply the tip of a huge iceberg of misinformation calculated to create a lot of problems between different countries and with the aim of promoting the interests of the terrorists," her office said in the statement.
Suu Kyi on Wednesday met Indian Prime Minister Narendra Modi, who said he shared Myanmar's concern about "extremist violence" in Rakhine state. Modi's government has taken a strong stance on an influx into India of some 40,000 Rohingya from Myanmar over the years, vowing last month to deport them all.
The latest violence in Rakhine state began when Rohingya insurgents attacked dozens of police posts and an army base. The ensuing clashes and a military counter-offensive killed at least 400 people and triggered the exodus of villagers to Bangladesh.
Suu Kyi has been accused by Western critics of not speaking out for the minority that has long complained of persecution, and some have called for the Nobel Peace Prize she won in 1991 as a champion of democracy to be revoked.
Myanmar says its security forces are fighting a legitimate campaign against "terrorists" responsible for a string of attacks on police posts and the army since last October.
Myanmar officials blame Rohingya militants for the burning of homes and civilian deaths. But rights monitors and Rohingya fleeing to neighbouring Bangladesh say the Myanmar army is trying to force them out with a campaign of arson and killings.
Officials in Bangladesh said the government would press ahead with plans to develop an isolated, flood-prone island in the Bay of Bengal to temporarily house tens of thousands of Rohingya.
The plan to develop the island and use it to house refugees was criticised by humanitarian workers when it was proposed in 2015 and revived last year. Bangladesh insists it alone has the right to decide where to shelter the refugees.
The U.N. source said Bangladesh may have revived the island plan to keep pressure on the international community, and not be left to handle the crisis on its own.
"Bangladesh is getting desperate in wanting to get some political traction on this Rohingya issue. They feel incredibly isolated," said the source, who declined to be identified.
Myanmar has been laying landmines across a section of its border with Bangladesh for the past three days, two government sources in Dhaka said, adding that the purpose may have been to prevent the return of Rohingya Muslims fleeing violence.
Bangladesh will formally lodge a protest on Wednesday against the laying of land mines so close to the border, said the sources who had direct knowledge of the situation but asked not to be identified because of the sensitivity of the matter.
A Myanmar military source said landmines were laid along the border in the 1990s to prevent trespassing and the military had since tried to remove them, but none had been planted recently.