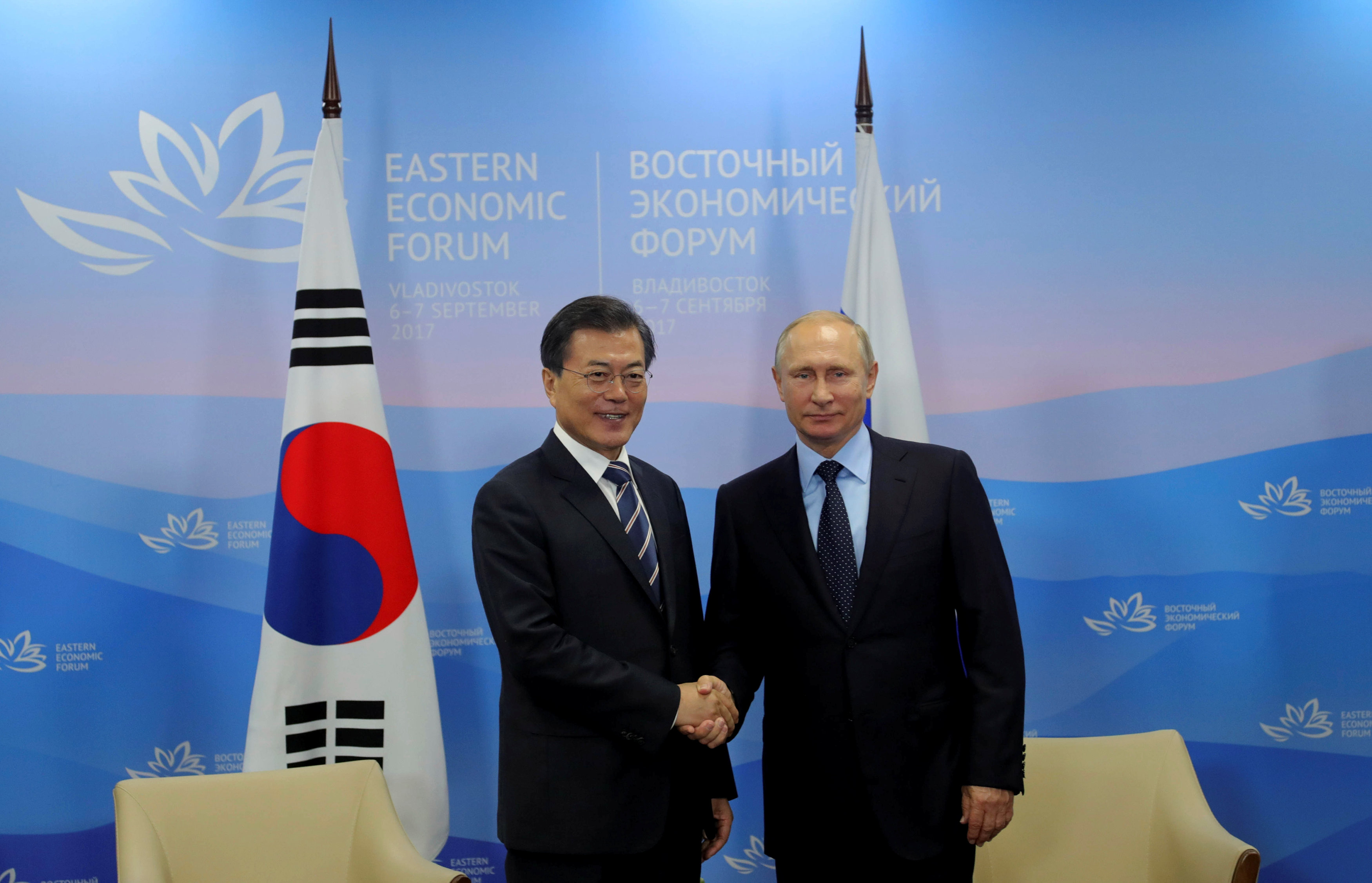 Vladivostok (Russia)/Seoul: Resolving the North Korean nuclear crisis is impossible with sanctions and pressure alone, Russian President Vladimir Putin said on Wednesday after meeting his South Korean counterpart, adding that the impact of cutting oil would be worrying.
Putin met South Korea's Moon Jae-in on the sidelines of an economic summit in the eastern Russian city of Vladivostok amid mounting international concern that their neighbour plans more weapons tests, possibly a long-range missile launch ahead of a weekend anniversary.
Putin denounced North Korea's sixth and largest nuclear bomb test on Sunday, saying Russia did not recognise its nuclear status.
"Pyongyang’s missile and nuclear programme is a crude violation of U.N. Security Council resolutions, undermines the non-proliferation regime and creates a threat to the security of northeastern Asia," Putin said at a joint news conference.
"At the same time, it is clear that it is impossible to resolve the problem of the Korean peninsula only by sanctions and pressure," he said.
No headway could be made without political and diplomatic tools, Putin said, later telling the TASS news agency that Russian and North Korean delegations might meet at the Vladivostok forum.
Moon, who came to power this year advocating a policy of pursuing engagement with North Korea, has come under increasing pressure to take a harder line.
He has asked the United Nations to consider tough new sanctions after North Korea's latest nuclear test.
Diplomats say the U.N. Security Council could consider banning North Korean textile exports, barring its airline or stopping supplies of oil to the government and military.
Other measures could include preventing North Koreans from working abroad and putting top officials on a blacklist aimed at imposing asset freezes and travel bans.
"I ask Russia to actively cooperate as this time it is inevitable that North Korea's oil supply should be cut at the least," Moon told Putin, according to a readout from a South Korean official.
Putin said North Korea would not give up its nuclear programme no matter how tough the sanctions.
"We too, are against North Korea developing its nuclear capabilities and condemn it, but it is worrying cutting the oil pipeline will harm the regular people, like in hospitals," Putin said, according to the South Korean presidential official.
Russia's exports of crude oil to North Korea were tiny at about 40,000 tonnes a year, Putin said. By comparison, China provides it with about 520,000 tonnes of crude a year, according to industry sources.
Last year, China shipped just over 96,000 tonnes of gasoline and almost 45,000 tonnes of diesel to North Korea, where it is used across the economy, from fishermen and farmers to truckers and the military.
Sanctions have done little to stop North Korea boosting its nuclear and missile capacity as it faces off with U.S. President Donald Trump, who has vowed to stop it from being able to hit the U.S. mainland with a nuclear weapon.
China and Russia have advocated a "freeze for freeze" plan, where the United States and South Korea stop major military exercises in exchange for North Korea halting its weapons programmes, but neither side is willing to budge.
North Korea says it needs to develop its weapons to defend itself against what it sees as U.S. aggression.
South Korea and the United States are technically still at war with North Korea after the 1950-53 Korean conflict ended with a truce, not a peace treaty.
China objects to both the military drills and the deployment in South Korea of an advanced U.S. missile defence system that has a radar that can see deep into Chinese territory.
South Korea's Defence Ministry said the four remaining batteries of the Terminal High Altitude Area Defense (THAAD) system would be deployed on a golf course in the south of the country on Thursday.
Two THAAD batteries have already been installed.
Chinese Foreign Ministry spokesman Geng Shuang reiterated China's opposition to the system, saying it could only "severely damage" regional security and raise "tensions and antagonism".
"China strongly urges the United States and South Korea to pay attention to China and other regional nations' security interests and concerns, immediately halt the progress of the relevant deployment, and remove the relevant equipment," Geng said.
Asian stocks fell on Wednesday after a slide on Wall Street overnight while the dollar was on the defensive with Korean tension showing few signs of abating.
Sunday's test of what North Korea said was an advanced hydrogen bomb was its largest by far.
Japan upgraded its assessment of the North Korean test to 160 kilotons from 120 kilotons after the size of the earthquake it generated was revised to magnitude 6.1.
"We estimate this was far bigger than previous nuclear tests," Defence Minister Itsunori Onodera told reporters.
Satellite imagery appeared to show the blast caused landslides at North Korea's Punggye-ri test site, according to 38 North, a Washington-based North Korean monitoring project.
South Korean officials said they were watching for radioactive fallout from the test and for signs of preparations for more activity.
British Defence Secretary Michael Fallon said on Wednesday China held the key to resolving the crisis, reiterating comments made by Prime Minister Theresa May and Australian leader Malcolm Turnbull after they spoke with Trump.
"China holds the key, the oil to North Korea flows from China... China has not just influence but has many of the levers that are needed to change behaviour in North Korea," Fallon told BBC radio.