Protests after Indian journalist shot dead at her residence in Bengaluru 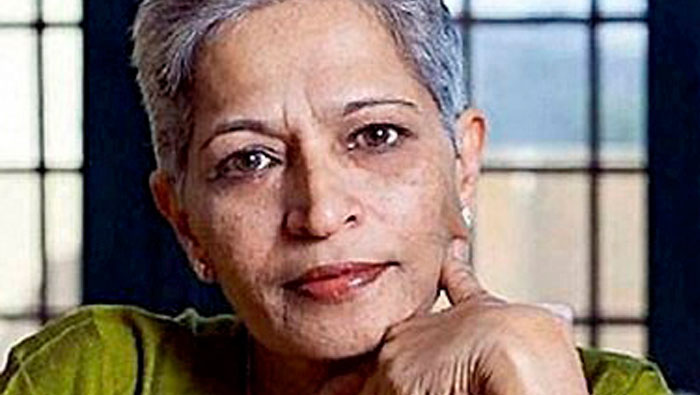 Bengaluru/New Delhi: Indian journalists and rights activists protested on Wednesday against the murder of an outspoken publisher of a weekly tabloid amid growing concerns about freedom of the press at a time of rising nationalism and intolerance of dissent.
Gauri Lankesh, 55, the editor and publisher of the Kannada language Gauri Lankesh Patrike, was shot dead on Tuesday by unidentified assailants near her home in the southern city of Bengaluru.
Body of Gauri Lankesh was found lying in a pool of blood outside her home.
She was shot dead on Tuesday in the southern city of Bengaluru by unidentified assailants.
"People in front of her house heard gunshots," the city's Police commissioner, T. Suneel Kumar, told reporters.
"We found four empty cartridges from the scene."
Lankesh was known as a fearless and outspoken journalist. She was a staunch critic of right-wing political ideology.
Last year, she was convicted of criminal defamation for one of her articles.
While the motivation for the killing was not immediately clear, political leaders, journalists and activists took to Twitter to express their outrage and denounce intolerance and any threat to free speech.
Karnataka state's chief minister Siddaramaiah called it an "assassination on democracy".
The identity and motivations of her killers were not known, police said.
Several journalist groups, including the Editors' Guild, Press Club of India and Press Association, held protests across India, calling the murder a "brutal assault on the freedom of the press".
She was a critic of the federal government and wrote extensively about secularism.
"Journalism is nothing without courage. Democracy is nothing without dissent. Lankesh had plenty of both," said Shekhar Gupta, an Indian journalist and political commentator.
The killing is a new low in India's track record in recent years of protecting journalists.
The South Asian nation of 1.3 billion people slipped three places to 136th in this year's World Press Freedom Index compiled by Reporters Without Borders.
The Committee to Protect Journalists has said that there have been no convictions in any of the 27 cases of journalists murdered in India because of their work since 1992.
The Union Home Ministry on Wednesday sought a report from the Karnataka government on the killing of journalist Gauri Lankesh, an official said.
The move came after Home Minister Rajnath Singh directed Home Secretary Rajiv Gauba to get a report from the state government, the home ministry official said.
The Karnataka government has been asked to provide details of the incident and the steps taken to nab those involved in the killing, the official said.
The Karnataka government on Wednesday decided to form a Special Investigation Team to probe the killing.
Information and Broadcasting Minister Smriti Irani condemned the killing of Lankesh and hoped there would be a speedy investigation and justice delivered.
Congress president Sonia Gandhi and vice president Rahul Gandhi also condemned the incident.
While Sonia said it was a chilling reminder that "intolerance and bigotry is raising its ugly head in our society", Rahul expressed shock and said no one could suppress the truth.