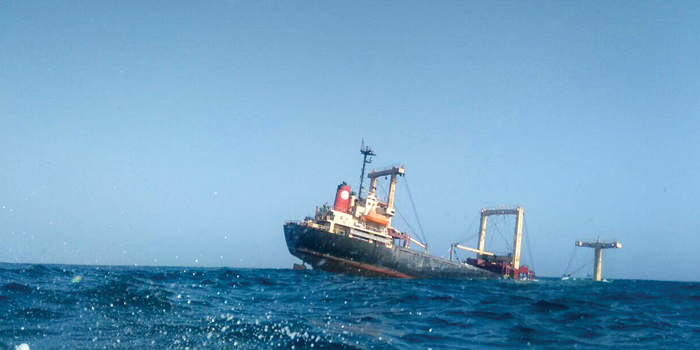 Latest: 'Not my first rescue': Pakistani expat who helped save 20 from sinking ship
Muscat: Twenty crew members of a Tanzanian ship were rescued by an Omani Good Samaritan after their ship sank on Saturday, the Royal Oman Police (ROP) announced.
"A commercial ship carrying the Tanzanian flag sank in Omani territorial waters just before the port of Al-Labki in Wilayat Jazir after sailing from Sharjah to Eritrea," ROP said in a statement.
In Pictures: Omani daring 20-man rescue at sea
The ship was carrying "building and steel materials and 20 crew of different nationalities who were rescued by a citizen and handed over to the Jazir police station," the statement added.
The crew were taken to "Al Jazir Hospital for tests, they are in good health. The local agent in the Sultanate was contacted to complete their deportation procedures," ROP added.
An official from the ROP added that the ship was was loaded with sand and iron, and sank six to nine miles from Al Lakbi.
Also read 'In his own words: Omani hero's race against time as ship sank'
"There were 20 crew members, all of whom were rescued by a boat and are currently in Jazir. The incident took place yesterday, not today," the official said.
An official at the Port of Duqm said: "The situation is under control, and what is of greatest importance to note here is that this is not an oil tanker, as was previously rumoured to be, but a cargo vessel flying a Tanzanian flag, and that is a good thing, because it means there is no oil spill that can occur. That is of foremost importance here, because it means there is no immediate harm to the surrounding environment.
"The matter of helping the vessel now lies with the members of the Royal Oman Navy and the RAFO."
The Ministry of Environment and Climate Affairs also put out a statement denying that the ship involved in the incident was an oil tanker.
The statement read, "Referring to news circulating on social media about the sinking of an oil tanker in Duqm, the Ministry, after coordinating with the competent authorities, confirms that it has not received any communication about the sinking of an oil tanker in Omani waters.
"We have received reports on the sinking of a ship withconstruction material, and confirm that the entire crew were rescued."