Oman residents can now swim with the sharks 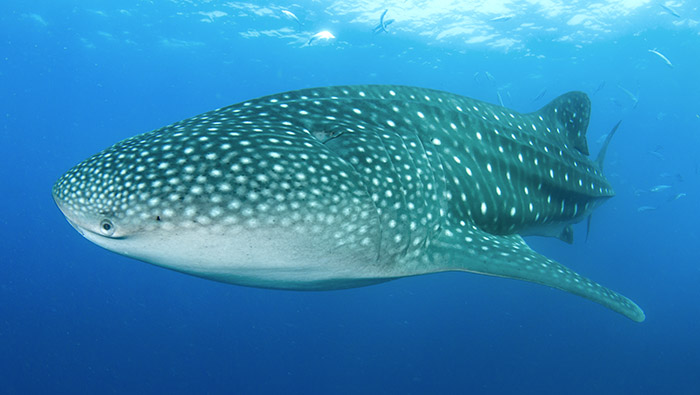 Muscat: Residents in Oman can now make the most of swimming with the sharks, with about 70 of them being sighted off the Omani coast, near the Dimaniyat Islands.
Oman is widely recognised as one of the planet’s premiere dive locations, with the whale shark season through September and November an annual highlight, and SeaOman – the marine leisure arm of Oman Sail – is offering a unique opportunity to swim with the majestic creatures alongside world freediving record holder and environmental educator, Pierre Frolla.
Frolla, who hails from the Principality of Monaco, will also offer adventure enthusiasts free diving lessons, which could come in handy while swimming alongside the sharks, which can be up to 12-metres long. Although they are normally found in groups of 10 to 15, this season has seen an unprecedented number of sharks off the Omani coastline, which means there is an 90% chance of spotting these majestic aquatic creatures near the vicinity of the Dimaniyat Islands.
The islands themselves are a protected marine nature reserve 16 miles off the coast of Oman, northwest of Muscat, and their large, unspoiled reefs are home to an unparalleled diversity of sea life. The clear, shallow waters typically offer visibility of 20 to 30 metres.
“Whale sharks are one of the most awe-inspiring sights in the ocean, and the conditions around the coast of Oman make it the perfect place to see them,” said Tony Hurst, SeaOman Head of Commercial Operations. “SeaOman is also delighted to have the expertise of Pierre Frolla on hand as he will further enhance what is sure to be a fantastic experience for all those who take part in this unique opportunity.”
Spaces are limited to a total of 200 slots for the whale shark swim with Frolla, which will be held from September 29 to October 4, with only 40 people able to take part on each of the five days. The free diving workshops are on October 6 and 7, with just 24 spaces available on each day.
Registration and booking for all the sessions can now be made with SeaOman, and all spaces will be allocated on a first come, first serve basis. Whale shark swimming days will be run from SeaOman’s HQ at the Al Mouj Marina in Muscat, with divers transferred by powerboat to the fully equipped base boat. A safety RIB will be on location at all times. The free diving workshops will also be run from SeaOman HQ, with the dive location yet to be decided.