Out on the Road: Look out, be extra careful 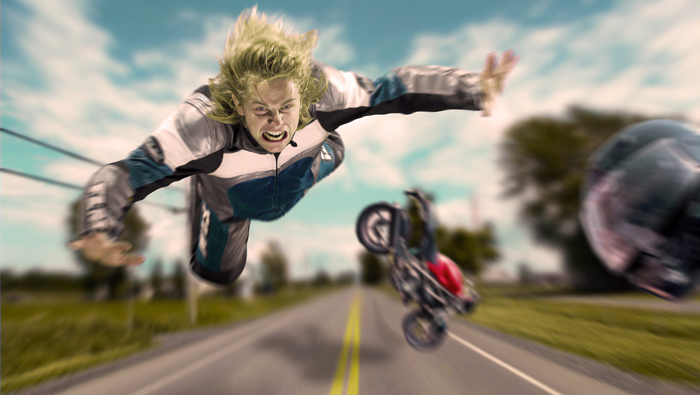 Life is so fragile, so uncertain; you never know what could happen to you this next moment – life could come embracing you with open arms, or you could just fall out of favour with it suddenly when all seemed going so well. And yet at most instances, we afford to be so careless. Maybe that’s how we humans are: lacking fear of the unforeseen.
I was reminded of life’s frailty yet again recently, when I happened to visit my friend after returning from vacations back home. This guy, a qualified stunt motorbike rider; all his life revolved around motorcycles. From a very tender age he started tending to motorbikes, started his own garage; his skills began to be known and consequently he was hired by Fairtrade Auto, for their motorbike operations. It was there, that I befriended him, and used to catch up with him.
This time also, I had turned up at the very place to congratulate him for his latest achievement – one of the bikes modified by him won the ‘Best Bike’ award at the recently concluded ‘Muscat Bike Week’. As I hastily inquired about him I was suddenly stricken with immense grief. I could not believe my ears for a moment.
Such a bright talent had been put to waste by a cruel stroke of fate. Some two weeks ago he was out riding his bike, when a car hit him badly sideways from the right, resulting in an injury that cost him his right leg, amputated knee down. He was always very composed on the road; never aggressive. All the stunts he pulled, all the menace he created on two-wheels, was only at the OAA (Oman Automobile Association) arena.
And yet he met this fate. All his dreams, all his aspirations suddenly came crashing in that ill-fated moment. Though he was found to be free of fault in the incident, still it was him who paid the ultimate price, for someone else’s mistake, which brings to think of all those careless riders out on the road, reckless and so full of confidence that they are masters of the trade, only waiting for a mishap to occur to them.
Trusting your skills too much is over confidence. Many a times I see, both riders and car drivers, whirling away at full speeds, even when there is a merging lane next to them or the road is brimming with fast paced traffic, thinking no harm would befall them as they are strictly keeping in their lane, and it is their right to pass first in that lane: What puerile behaviour.
Humans are not robots; to err is human. What if that driver entering from the merging lane just made haste, or some driver more rash than you switched into your lane just like that, thinking you’ll somehow manage? You relied on his adherence to the road rules, and he relied on your skills, but none could estimate the possibility of error from either side and act accordingly. You can only make merry until calamity hasn’t struck you. After that it is only regret and the question “What if I could have acted patiently for just one second?” lingering in the mind eternally.
Even I had a brush with death sometime back when I was testing a bike. At the Al Bustan road I was pacing at around 125kph, when suddenly a football bounced right in front of me. For a thousandth part of the second I thought I was done; this was how I was destined to meet my end – on the road, in a rider’s costume.
But lucky as I would say I was, I just managed to dodge it with a swift turn to the right. I am always extra careful while riding out, my right feet and hand never move away from the brakes, and eyes always scanning the farthest distance for any possible hazard. But what to do when trouble pops up from nowhere right in front of you? It was only my extra alertness on the road, which saved me that day. Only God knows where I would have been now, were I flying carefree that day, ripping the brand new engine, relishing the roary sound note.
Just knowing how to maneuver your ride perfectly or race it is not to be labelled as skilled. The truly skilled are those who are alert enough on the road and know the virtue of patience. I hope and pray my friend bounces back with a bang soon; he has lost a limb, but definitely not his heart. He still looks to be surrounded by the love of his life —bikes. Ride safe.