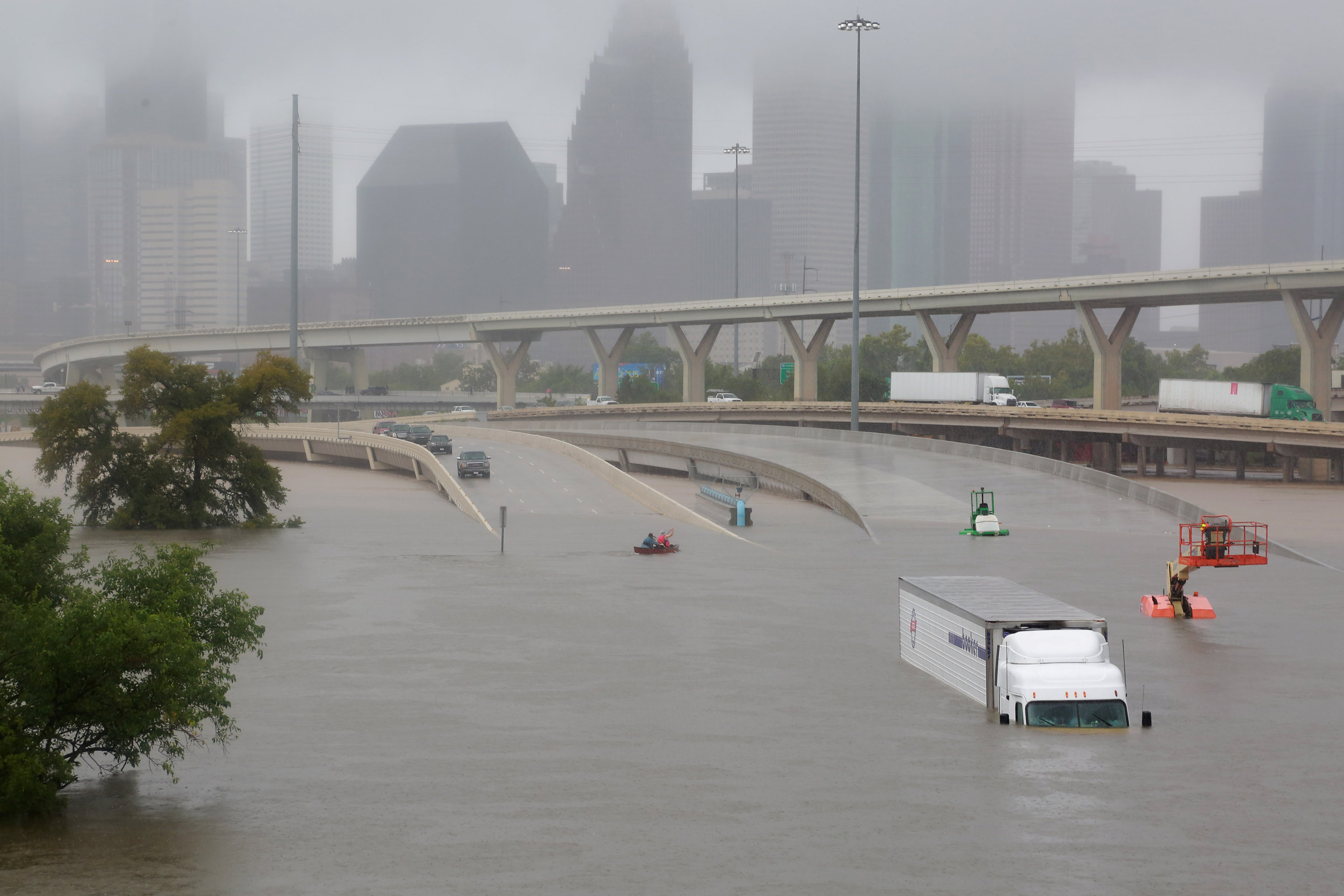 Houston: U.S. President Donald Trump arrived in Texas on Tuesday and vowed the federal government would have a complete response to the devastating flooding of Tropical Storm Harvey, the biggest natural disaster of his White House tenure.
The slow-moving storm has brought record-breaking rains and catastrophic flooding to Texas, killed at least nine people, led to mass evacuations and paralysed Houston, the fourth most-populous U.S. city. Some 30,000 people were expected to seek emergency shelter as the flooding entered its fourth day.
Officials in Harris County, where Houston is located, said reservoirs built to handle drainage water were beginning to overflow on Tuesday. They urged residents to evacuate as they released water to alleviate pressure on two dams, a move that would add to flooding along the Buffalo Bayou waterway that runs through the area.
Brazoria County, south of Houston, also called for immediate evacuations around a levee Columbia Lakes that had been breached by floodwaters from Harvey, the most powerful hurricane to strike Texas in more than 50 years.
Trump, speaking in Corpus Christi near where Harvey first came ashore last week, said he wanted the relief effort to stand as an example of how to respond to a storm.
"We want to do it better than ever before," he said. "... This was of epic proportion. Nobody's ever seen anything like this."
The storm has drawn comparisons with Hurricane Katrina, which devastated New Orleans 12 yeas ago, killing 1,800 people. Former President George W. Bush was widely criticized for his administration's handling of the response to that disaster, taking a heavy toll on public support of his administration.
Trump clearly was aiming to avoid a similar reaction.
Some 3,500 people already have been rescued from high waters in the Houston area with police, firefighters and National Guard troops continuing to try to locate those marooned in high waters.
The storm broke Texas rainfall records at one measuring site south of Houston, which recorded 49.32 inches (1.25 m) of precipitation since the storm's start. The rainfall is more than the region typically sees in a year and exceeds 48 inches (1.22 m) recorded in 1978.
Multiple looters were arrested overnight, police said.
Harvey has roiled energy markets and wrought damage estimated to be in the billions of dollars, with rebuilding likely to last beyond Trump's four-year term in office.
After Corpus Christi, was headed to Austin, the state capital, to meet with officials. Houston was not on his itinerary because much of it is impassable.
While much of the damage in Houston has been rain-related, the storm's winds picked up overnight, bending street signs and tearing at metal fences in the downtown.
Much of the Houston metropolitan area, where 6.8 million people live, remained underwater on Tuesday. Dangerous rescues went on through the night.
About 9,000 evacuees were staying at Houston's George R. Brown Convention Center and Houston Mayor Sylvester Turner said his office had asked the Federal Emergency Management Agency for assets to allow the city to shelter another 10,000 people.
"I'm just trying to stay strong," said Julio Gamez, 35, who evacuated to the center on Saturday night with his wife after floodwaters rose to within a foot (30 cm) of his roof. "We've lost everything. But at least we're safe."
Other shelters were set up in Dallas, about 250 miles (402 km) to the north, for about 8,000 people, and Austin, 160 miles (258 km) west, to take in 7,000 people.
Television pastor Joel Osteen's sprawling Lakewood Church offered to accept flood-stranded residents a day after posting on its Facebook page that it was inaccessible due to severe flooding.
After a deluge of angry comments on social media, the church said on Twitter that it would take in people who need shelter.
Harvey was expected to reach Louisiana early on Wednesday - one day after the 12th anniversary of Hurricane Katrina hit the state and killed 1,800 people.
Among the most recent deaths from Harvey was a man who drowned on Monday night while trying to swim across flooded Houston-area roads, the Houston Chronicle quoted the Montgomery County Constable's Office as saying.
The slow-moving storm's center was in the Gulf of Mexico about 113 miles (183 km) southeast of Houston by midday Monday. It was likely to remain just off the coast of Texas through Tuesday night before moving inland over the northwestern Gulf of Mexico on Wednesday, according to the U.S. National Hurricane Center.
Harvey was expected to produce another 6 to 12 inches (15-30 cm) of rain through Thursday over parts of the upper Texas coast into southwestern Louisiana, the National Weather Service said.
Schools and office buildings were closed throughout the area, with hundreds of roads blocked by high water and the city's two main airports shut.
The Gulf of Mexico is home to half of U.S. refining capacity. The reduction in supply led gasoline futures to hit their highest level in two years this week as Harvey knocked out about 13 percent of total U.S. refining capacity, based on company reports and Reuters estimates.
The floods could destroy as much as $20 billion in insured property, making the storm one of the costliest in history for U.S. insurers, according to Wall Street analysts.