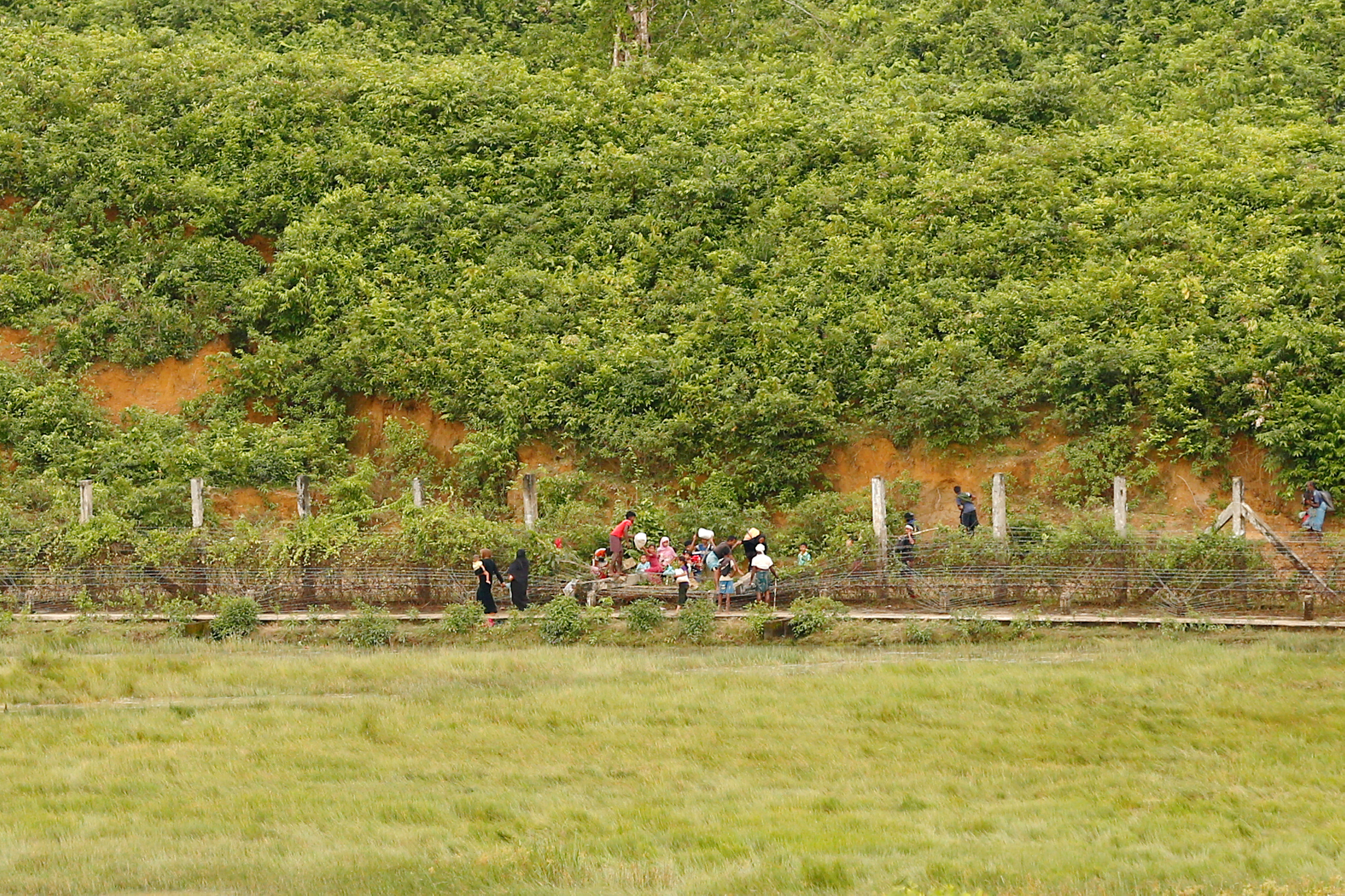 Yangon/Cox's Bazar (Bangladesh): Myanmar's government said it has evacuated at least 4,000 non-Muslim villagers amid ongoing clashes in northwestern Rakhine state, as thousands more Rohingya Muslims sought to flee across the border to Bangladesh on Sunday.
The death toll from the violence that erupted on Friday with coordinated attacks by Rohingya insurgents has climbed to 98, including some 80 insurgents and 12 members of the security forces, the government said.
Bracing for more violence, thousands of Rohingya - mostly women and children - were trying to forge the Naf river separating Myanmar and Bangladesh and the land border. Reuters reporters at the border could hear gunfire from the Myanmar side on Sunday, which triggered a rush of Rohingya towards the no man's land between the countries.
Around 2,000 people have been able to cross into Bangladesh since Friday, according to estimates by Rohingya refugees living in the makeshift camps in Bangladesh.
The violence marked a dramatic escalation of a conflict that has simmered in the region since last October, when a similar but much smaller Rohingya attack prompted a brutal military operation dogged by allegations of serious human rights abuses.
While the chaos and lack of access made detailed assessments difficult, experts said the latest attacks were so widespread they appeared to be more akin to a movement or an uprising, rather than an insurgent offensive.
One army source said the military was also struggling to differentiate.
"All the villagers become insurgents, what they're doing is like a revolution," said the source in Rakhine. "They don't care if they die or not. We can't tell who of them are insurgents."
The treatment of approximately 1.1 million Muslim Rohingya in mainly Buddhist Myanmar has emerged as the biggest challenge for national leader Aung San Suu Kyi. Suu Kyi has condemned the raids in which insurgents wielding guns, sticks and homemade bombs assaulted 30 police stations and an army base.
The Nobel Peace Prize laureate has been accused by some Western critics of not speaking out for the long-persecuted Muslim minority.
Win Myat Aye, Myanmar's minister for social welfare, relief and resettlement, told Reuters late on Saturday that 4,000 "ethnic villagers" who had fled their villages had been evacuated, referring to non-Muslim residents of the area.
"We are providing food to the people cooperating with the state government and local authorities," said Win Myat Aye. He was unable to describe the government's plans to help Rohingya civilians.
Rakhine residents in ethnically mixed or non-Muslim towns have readied knives and sticks to defend themselves. Many were stranded in their villages located in Muslim-majority areas as clashes continued and some roads had been mined, residents said.
People from the main towns of Maungdaw and Buthidaung said they were worried food supply routes had been temporarily cut off.
The Rohingya have for years endured apartheid-like conditions in northwestern Myanmar - they are denied citizenship and face severe restrictions on their movements. Many Myanmar Buddhists regard them as illegal immigrants from Bangladesh.
Observers worry that the latest attacks represent a "breaking point" many Rohingya have reached with the help of a charismatic insurgent leader, Ata Ullah.
Ata Ullah leads the Arakan Rohingya Salvation Army (ARSA) which instigated the October attacks and claimed responsibility for the latest offensive.
Myanmar declared ARSA, previously known as Harakah Al Yaqin, a terrorist organisation in the wake of the attacks.
Across the border, Bangladesh's foreign ministry said it was concerned thousands of "unarmed Myanmar nationals" were planning to enter the country.
Rohingya have been fleeing Myanmar to Bangladesh since the early 1990s and there are now around 400,000 in the country, where they are a source of tension between the two nations who both regard them as the other country's citizens.
At the no man's land near Bangladesh's Gumdhum village, dozens of Rohingya women, most wearing burqa, sat cramped under a few black plastic sheets shielding them from the harsh sun.
A number of Rohingya men ran to the unoccupied area between the two countries after several gun shots rang out on the Myanmar side.
Bangladesh border guard officials said they were providing food and water to the Rohingya, but that no one would be let in.
"Please save us," said 61-year-old Amir Hossain said, as infants cried nearby. "We want to stay here or else we'll get killed."