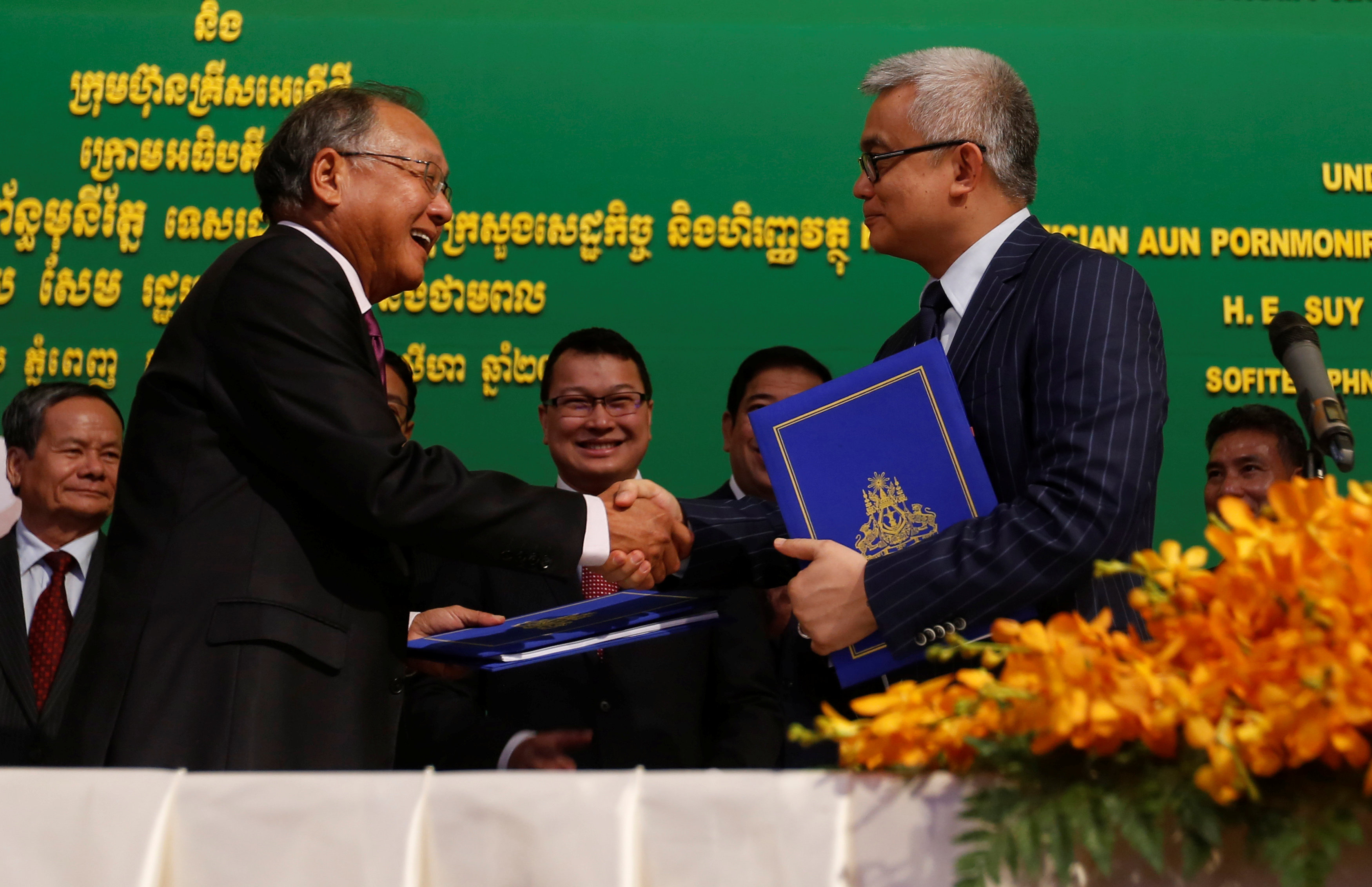 Phnom Penh: Cambodia signed an agreement with Singapore-listed KrisEnergy Ltd on Wednesday to develop an offshore oil field that could finally see Cambodia produce its own oil after years of delays.
Cambodia has struggled to develop oil fields in the Gulf of Thailand, as few companies are willing to invest in the area following the 2014 global oil price slump.
The agreement between Cambodia and KrisEnergy covers 3,083 sq km (1,190 square miles) of the Khmer basin in the Gulf of Thailand known as Block A, the company said in a statement. Oil will be produced from the Apsara field within the block and output is expected within 24 months of the official launch of the project.
"Shortly after signing, we will declare a final investment decision and proceed to deliver first oil in 24 months - sometime in 2019," said KrisEnergy Chief Operating Officer Kelvin Tang at a signing ceremony in the Cambodian capital Phnom Penh.
Tang said that KrisEnergy is looking for partners to invest in the project and that Cambodia will receive around $500 million in fees, taxes and royalties over the project's lifespan.
Cambodia's Finance Minister Aun Pornmoniroth said the area is estimated to yield over 30 million barrels over a nine-year period and that Cambodia was ready to learn from other countries' lessons and would not become oil-dependent.
"It will not allow itself to become a heavily oil dependent economy," Aun Pornmoniroth said. "It will instead use oil revenue to fuel structural transformation to sustain economic growth."
According to the agreement, KrisEnergy will own a 95 per cent interest in the field while the Cambodian government will own the rest.
The first phase of development of the Apsara field will start with a single production platform and could potentially expand to 10 platforms depending on a final oil output determination, KrisEnergy said in their statement.
KrisEnergy bought out U.S. oil major Chevron Corp's operating interest in Block A in 2014 for $65 million. Chevron found oil in 2004 in the block but failed to reach a development agreement with the Cambodian government.
Meanwhile, another Reuters said that Cambodia ordered a U.S.-funded nonprofit organization to stop its activities and remove all foreign staff from the country on Wednesday, the latest sign of growing anti-American sentiment ahead of a general election next year.
In a statement, the foreign ministry accused the National Democratic Institute (NDI) of operating in Cambodia without registering, and said its foreign staff had seven days to leave.
Authorities were "geared up to take the same measures" against other foreign NGOs which fail to comply with the law, the ministry added.
According to its website, the NDI works with political parties, governments and civic groups to "establish and strengthen democratic institutions."
The U.S. Embassy in Phnom Penh and the NDI did not reply to Reuters' requests for comment.
Prime Minister Hun Sen, who has ruled Cambodia for more than three decades, on Tuesday ordered the English-language The Cambodia Daily newspaper to pay taxes accrued over the past decade or face closure. The paper was founded by an American.
He also lashed out at the United States and non-governmental organizations (NGOs) and accused them of funding groups attempting to overthrow his government.
Hun Sen's anti-Western sentiment comes amid what rights groups and the United Nations say is an increasingly tense situation ahead of elections in 2018.
The opposition has accused Hun Sen and his ruling Cambodian People's Party (CPP) of a crackdown on its critics and last week a U.N. human rights envoy warned Cambodia it "appeared to be approaching a precipice".
ASEAN Parliamentarians for Human Rights said on Wednesday that the NDI had not been given adequate opportunity to respond to the accusations against it.
"The fact that this comes in a context of increasing repression of freedom of expression and civil society space in Cambodia is all the more worrying, and hints at continued attempts by the ruling party to consolidate power ahead of next year's national elections," group Chair Charles Santiago said.
The Overseas Press Club of Cambodia on Wednesday asked the government to proceed against The Cambodia Daily with "fairness and due process".
It noted that the paper had a history of running stories that have angered the government.