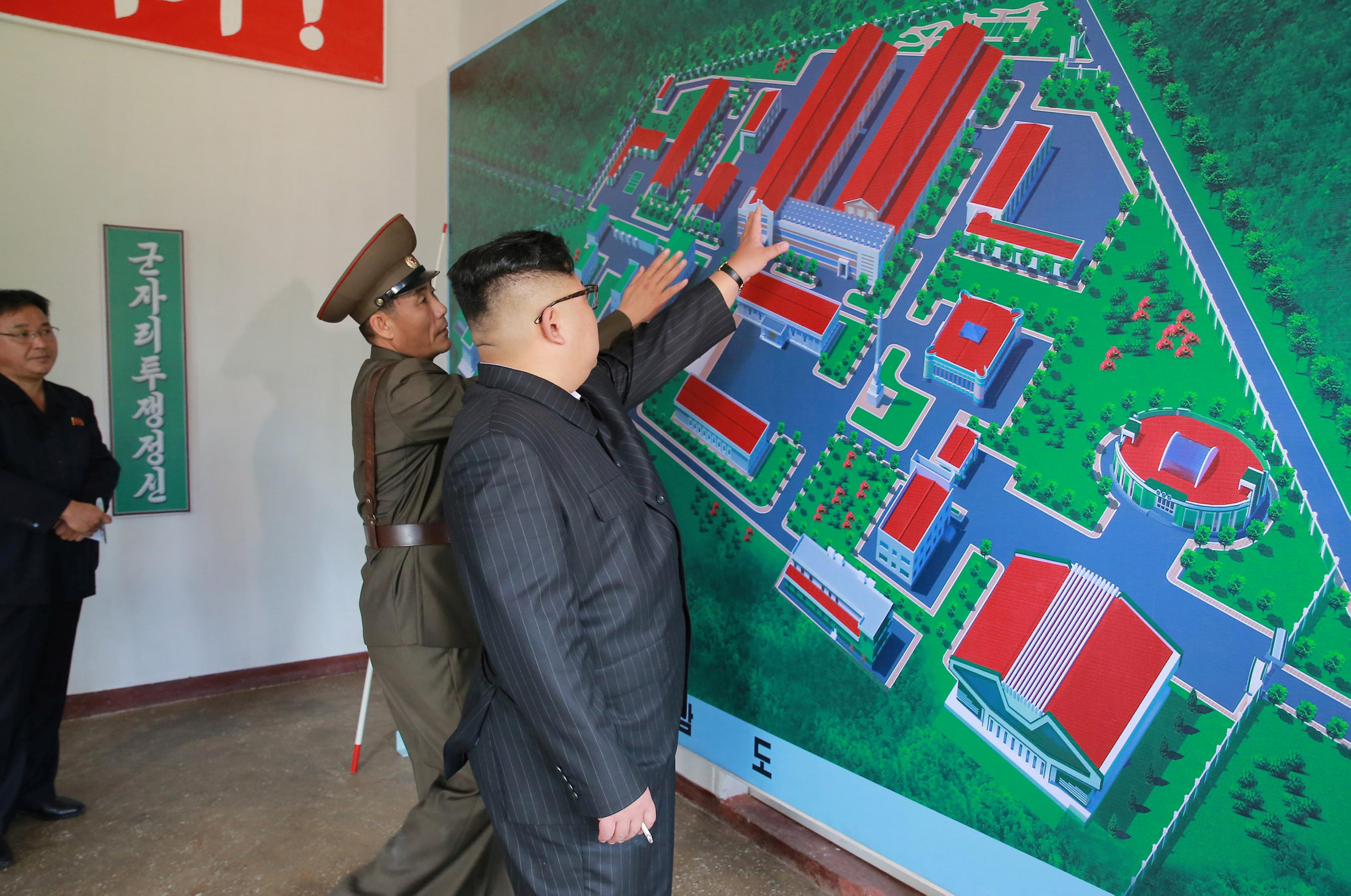 Seoul: North Korean leader Kim Jong Un has ordered more solid-fuel rocket engines, state media reported on Wednesday, as he pursues nuclear and missile programmes amid a standoff with Washington, but there were signs of tension easing.
The report carried by the KCNA news agency lacked the traditionally robust threats against the United States after weeks of unbridled acrimony, and U.S. President Donald Trump expressed optimism about a possible improvement in relations.
"I respect the fact that he is starting to respect us," Trump said of Kim at a raucous campaign rally in Phoenix, Arizona.
"And maybe - probably not, but maybe - something positive can come about," he said.
The KCNA report, about a visit by Kim to a chemical institute, came not long after U.S. Secretary of State Rex Tillerson appeared to make a peace overture, welcoming what he called recent restraint shown by the reclusive North.
Kim was briefed about the process of manufacturing intercontinental ballistic missile (ICBM) warhead tips and solid-fuel rocket engines during his tour of the Chemical Material Institute of the Academy of Defence Science, KCNA said.
"He instructed the institute to produce more solid-fuel rocket engines and rocket warhead tips by further expanding engine production process and the production capacity of rocket warhead tips and engine jets by carbon/carbon compound material," KCNA said.
North Korea has conducted two nuclear tests and dozens of missile tests since the beginning of last year, significantly raising tension on the heavily militarised Korean peninsula and in defiance of U.N. Security Council resolutions. Two ICBM tests in July resulted in a new round of tougher global sanctions.
The last missile test on July 28 put the U.S. mainland in range, prompting heated exchanges that raised fears of a new conflict on the peninsula.
Tillerson, however, noted what he called the restraint the North had shown and said on Tuesday he hoped a path could be opening for dialogue.
South Korea and the United States are conducting an annual military exercise this week involving computer simulations of a war.
The drills, which the North routinely describes as preparation for invasion, run until Augut 31, and included South Korean a civil defence exercise on Wednesday that saw traffic halted, movie screenings interrupted and hundreds of thousands of people directed to underground shelters.
The KCNA report said Kim had given "special thanks and special bonus" to officials of the institute, calling them heroes. A photograph showed Kim in a grey pinstriped suit, smiling before a large flow chart that described some kind of manufacturing process.
There was none of the fiery rhetoric of recent weeks, when Kim threatened to fire missiles into the sea near the U.S. Pacific territory of Guam after Trump warned North Korea it would face "fire and fury" if it threatened the United States.
But there were some signs of tension after the United States imposed new North Korea-related sanctions, targeting Chinese and Russian firms and individuals for supporting North Korea's weapons programmes.
The U.S. Treasury designated six Chinese-owned entities, one Russian, one North Korean and two based in Singapore. They included a Namibia-based subsidiary of a Chinese company and a North Korean entity operating in Namibia.
China reacted with irritation, saying the United States should "immediately correct its mistake" of imposing unilateral sanctions on Chinese companies and individuals.
Chinese Foreign Ministry spokeswoman Hua Chunying said all sides, especially the United States and North Korea, needed to exercise restraint.
"We hope all sides can be brave enough to shoulder their responsibilities, show goodwill to each other and take correct actions to help further ease tensions," she told a regular press briefing.
Singapore-registered companies Velmur Management and Transatlantic Partners were named in the U.S. Treasury's sanction statement as providing oil to North Korea and working with designated individuals.
Singapore's Ministry of Foreign Affairs said U.S. authorities had informed them prior to the designations and it was investigating.
"Singapore will strictly fulfil its obligations under the UNSCRs and international law, and not allow our financial system to be abused for the conduct of illicit activities," the ministry said in a statement, referring to U.N. Security Council resolutions.
Both Velmur and Transatlantic are represented by business service providers in Singapore that manage their local registrations.
Rivkin, which provides secretarial services for Velmur, said it would end its business relationship with the company and file a suspicious transaction report on their dealings to the police.
A representative for MEA Business Consultancy, which is located at the registered address for Transatlantic, said it provided services for the firm but only for registration purposes.
The United States has long urged China to do more to rein in North Korea, which counts Beijing as its lone major ally. Data released on Wednesday showed China's trade with North Korea fell in July from a month earlier as a ban on coal purchases from its isolated neighbour slowed imports.
The United States is technically still at war with the North because their 1950-53 conflict ended in a truce, not a peace treaty. The North routinely says it will never give up its weapons programmes, saying they are necessary to counter U.S. hostility.