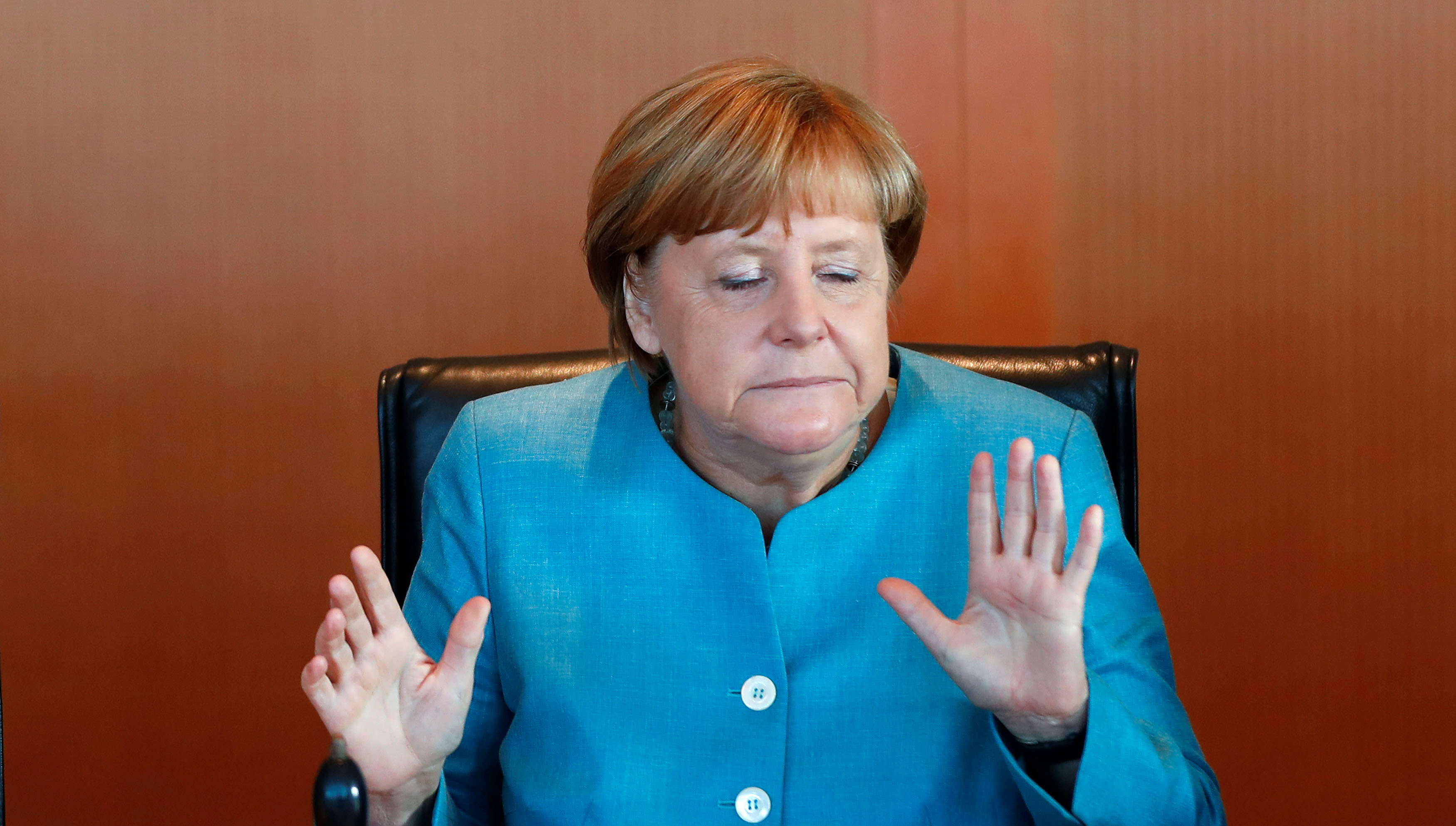 Alarmed by the rise of unpredictable strongmen around the world, German Chancellor Angela Merkel feels she must do more to defend the Western order on which Germany depends. It has been a transformation for the chancellor.
Last year, she dismissed as "absurd" the idea that she should head a Western alliance shaken by Donald Trump's U.S. election victory. Weakened by Europe's migrant crisis, Merkel even wondered if she should run for re-election.
"She asked herself: 'Can I do this? Am I ready for this?'" one close aide said. But now, with the migrant issue under control in Germany, the 63-year-old is ready. Visibly happier, she is campaigning for next month's election with renewed conviction: a resolve to secure a world order threatened by leaders like Trump, Vladimir Putin and North Korea's Kim Jong Un.
On the campaign trail, she likes to invoke the "uncertain situation in the world". The message is clear. "Things have changed," the aide said. "This means Germany must take on more responsibility." German foreign policy has been constrained by the legacy of the last World War. But Merkel is pushing Berlin's interests beyond its traditional European sphere.
With North Korea, she says Germany is ready to offer diplomatic and political muscle if required, a senior government source said. Germany is one of the few Western countries with an embassy in Pyongyang and is willing to do what it can to use this channel to help bring about talks.
At the same time, Merkel is using the trade-based relationship she has nurtured with China to press Beijing to help defuse the dispute.
"We must use our good relations with the Chinese to encourage them to come up with constructive proposals on what can be done," said Juergen Hardt, the German government's coordinator for transatlantic policies.
In April last year, Merkel described how she realised that trouble on the European Union's doorstep meant Germany must play a bigger role beyond its borders. Looking at a map showing the EU's passport-free area in one colour and neighbouring countries in another, she saw clearly how close Syria and Ukraine were. "This is Europe's neighbourhood," she said.
Reacting to crises in this neighbourhood, Merkel first strongarmed Turkish President Tayyip Erdogan into a deal to stem the migrant flow from Syria in exchange for EU economic aid. Now, she wants to slow the tide of refugees from Africa with a new "Marshall Plan" to bring investment and business growth that will persuade people to stay at home.
In Ukraine, Merkel is pursuing with France a joint diplomatic response to Russian meddling, though this has yet to produce peace.
"All of a sudden, German policymakers realise they need to be much bigger stakeholders in this global order on which they depend but into which they have not invested as much as they should," said Jan Techau of the American Academy in Berlin.
Merkel is starting to take diplomatic positions out of conviction - a departure from her consensus-based style during the euro zone and migrant crises. This shift began after Trump's election, when she set out how she would deal with him: a readiness to work closely on the basis of the values of democracy, freedom, respect for the law and for the dignity of people.
For Merkel, climate policy belongs to this value set. She sees it as crucial to managing globalisation and it has been her principal point of disagreement with Trump.
"We Europeans must really take our fate into our own hands," she said, and when Trump announced he was quitting the Paris global climate change accord, she sought to isolate him.
She wanted the six members of the G7 other than the United States to issue a statement backing the accord, sources close to her said. In the end, Germany, France and Italy signed. Britain, Canada and Japan - all with close U.S. ties - did not. Merkel stayed on the case.
In the run-up to a July summit of G20 leaders, which she chaired, she made a point of courting a list of countries hoping to profit from trade with Germany. The upshot was isolation for Trump at the G20 meeting, where 19 members agreed that the Paris accord was "irreversible".
At the same time, the communique included a text all G20 countries could sign, a compromise achieved with German help. "In terms of global leadership, it's not hugely ambitious," one G20 diplomat said.

"On the other hand, the success could be seen as getting Trump into the process: take a step back to get him in, and later move forward with him." Despite her growing diplomatic assertiveness, it is this instinct to compromise that handicaps Merkel's quest for a place in history alongside Konrad Adenauer, who led Germany's rebirth after World War Two, and Helmut Kohl, who reunified the country.
Restricting Merkel's room for manoeuvre is the fact that many Germans are turned off by foreign policy, with one survey showing just 30 per cent of voters think it is a top priority for Germany to do more to promote its interests abroad.
"The big problem is that this is not anything that sells at home," said Techau at the American Academy. "You can't win votes with this." Merkel is also hampered by Germany's Nazi past, which has left it without the military might needed to project power.
Yet Kohl, Merkel's mentor, took chances, first with reunification and then by defying public opinion to bring in the euro. Merkel is altogether more cautious. In 2015, "merkeln" - a verb meaning being to be unable to take decisions - was named Germany's Youth Word of the Year.
David McAllister, a close party ally, describes how "she looks at the different approaches to solve the problem and has a debate with her advisers about what's best: A, B, C, or D. Then we go with the best option."
This methodical approach, honed during her training as a physicist, can leave her upstaged by more dynamic leaders. Trump and Putin did just that at the G20 summit when they walked out of a session on climate change to hold a bilateral meeting that stole headlines and highlighted the 'hard power' they wield and Merkel does not. Merkel still welcomed their meeting.
As a committed Atlanticist, she does not want to alienate an American president. But the episode showed the limits of what she can achieve on the world stage. "Germans have learnt that they will only do well if they are ready to compromise," said one senior party official. "We don't want to be the ones people look at, and feel they must tremble or admire." - Reuters