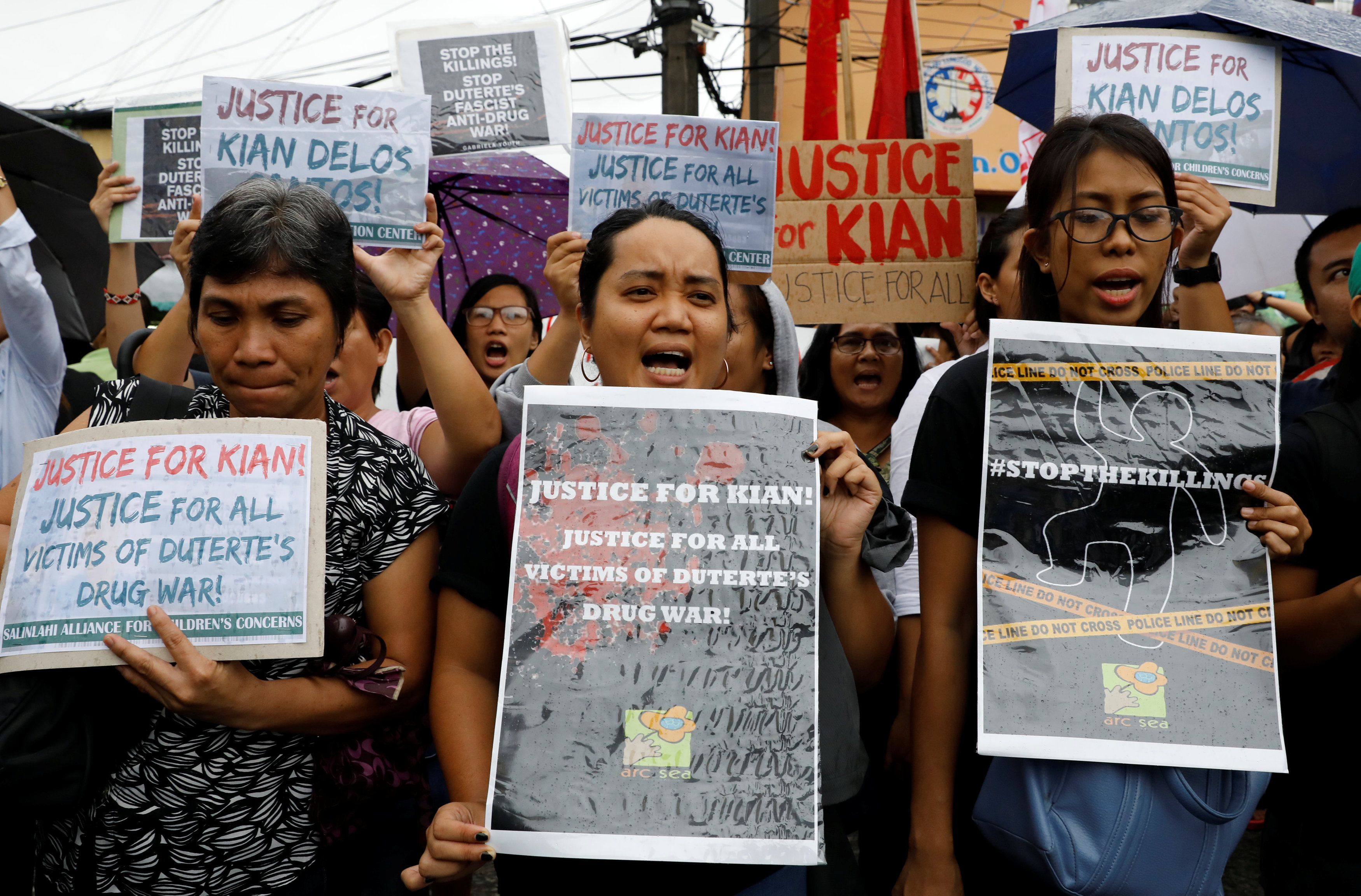 Manila: Political opponents of Philippine leader Rodrigo Duterte on Tuesday urged him to end a culture of impunity and quell a surge in drug-related killings, amid widespread anger at police over the death of a teenager.
Allegations of police abuse and a cover-up in last week's death of Kian Loyd delos Santos has caused rare outrage among a public largely supportive of Duterte's campaign, which saw more than 90 people killed last week in three nights of intensified police operations.
The grade 11 student was shot dead on Wednesday last week in a rundown area of Manila.
According to a forensic expert who conducted an autopsy, Delos Santos was shot in the back of the head and ears while on the floor, suggesting there was no gunfight, contrary to an official police report. The victim's family reject police allegations he was a drug courier.
Duterte has resolutely defended police on the front lines of his 14-month-old war on drugs, but late on Monday he said three officers involved in the teenager's killing should be punished if found to have broken the law.
Duterte said he had seen the CCTV footage acquired by media which showed plain clothes police dragging a man matching the description of Delos Santos, to a location where he was later found dead.
Opposition Senator Leila de Lima, a detained critic of Duterte, challenged the president to order the police to stop killing.
"I dare you, Mr President, to issue a clear and categorical order to the entire police force to stop the killings now," de Lima said in a handwritten note from a detention facility, where she is being held on charges of involvement in drugs trade inside jails. She denies the charges.
"Just say it. Do it now, please."
Another senator, Risa Hontiveros, told the house Duterte had blood on his hands and "reveled in the deaths of drug addicts", inspiring a culture of impunity and killing.
Filipinos tired of crime and drugs and supportive of the president had woken up to what was happening, she said.
"You had no choice but to confront his death because his narrative was compelling," she said of Delos Santos.
"You felt stirred into action because you could no longer ignore the growing outrage... But Kian was not the first. That there were thousands of deaths before him and that you allowed it to happen."
Social media users, politicians of all sides and Catholic bishops have called for an impartial investigation into the surge in killings by police, which stopped suddenly when news of the teenager's death surfaced. The Senate will hold an inquiry into last week's bloodshed on Thursday.
Since Duterte took office, more than 3,500 people have been killed in what the Philippine National Police (PNP) says were gunfights with drug suspects who had resisted arrests.
Police say some 2,000 more people were killed in other, drug-related violence that it denies involvement in. Human rights advocates, however, say the death toll in the war on drugs could be far higher than police have reported.
Senator Paulo Benigno Aquino said that without the CCTV footage, the case of Delos Santos would have gained no attention. He said Duterte should stop the killings and strengthen the judiciary, education, law enforcement and rehabilitation.
"There must be other ways, Mr President. There has to be other solutions to our drug menace," he said.
Separately, Duterte's office and the military moved to quell speculation of discontent among the security forces about their involvement in the anti-drugs campaign.
A shadowy group of soldiers and police on Monday issued a statement calling for Duterte's removal for turning the security forces into his "private army" and ordering them to carry out extrajudicial killings. The group did not identify its members.