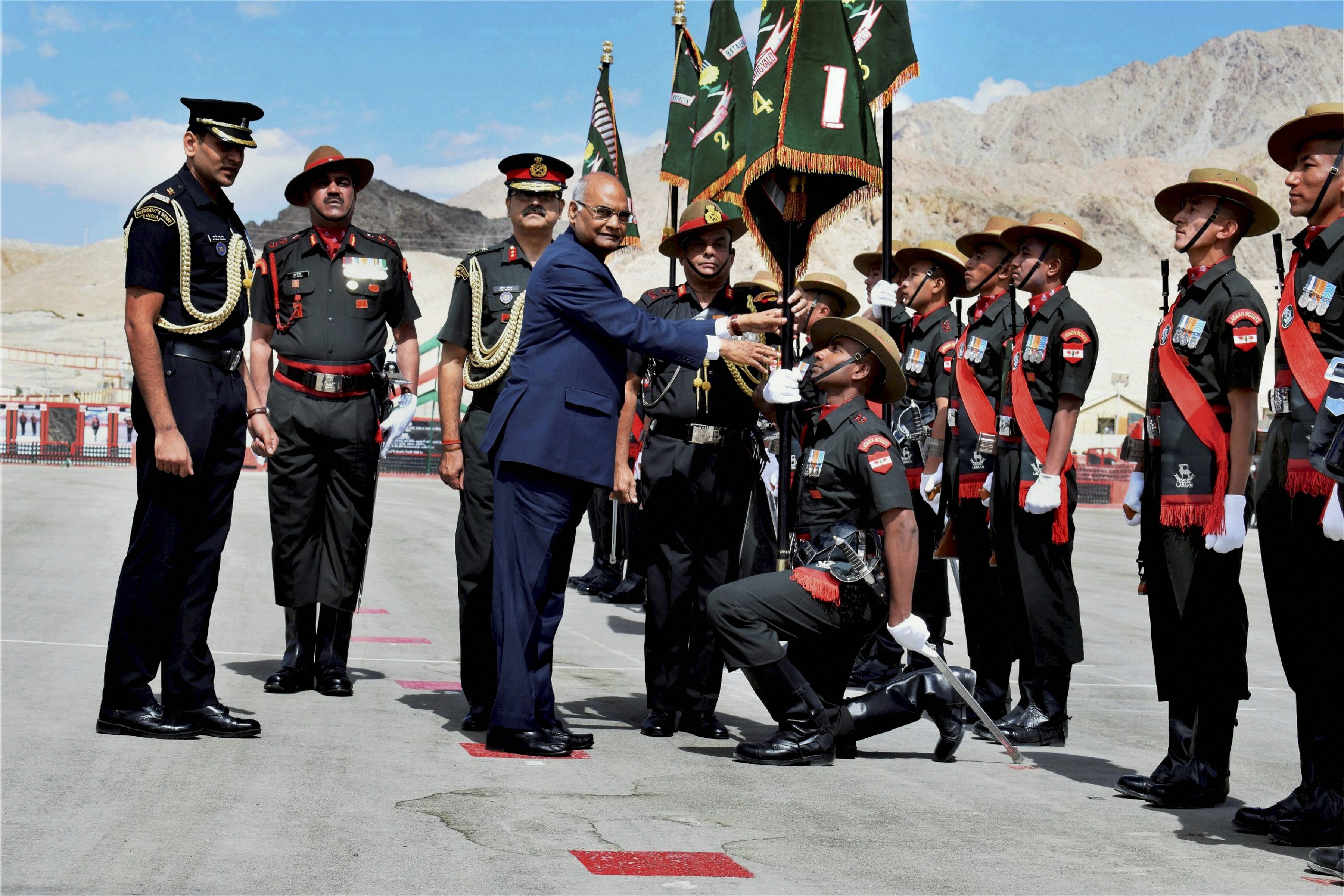 Jammu: Decorated with 605 gallantry and distinguished service awards, Ladakh Scouts on Monday got President's Colours from Ram Nath Kovind at Leh. The president arrived in Leh on a day's visit to Jammu and Kashmir. It is Kovind's first visit outside Delhi after assuming the office earlier this month. "The President of India Ram Nath Kovind today presented the President's Colours to Ladakh Scouts Regimental Centre and all five battalions of the regiment," defence spokesman said. A ceremonial parade was conducted as per the highest military traditions of the Indian Army which was attended by a spectrum of civil and military dignitaries including the governor and chief minister of Jammu and Kashmir, he added. The Chief of the Army Staff, GOC-in-C Northern Command, GOC 14 Corps besides a large number of serving and retired personnel witnessed the grand ceremony. He said that the president complimented the Ladakh Scouts personnel for their outstanding performance in all spheres and their exceptional valour and sacrifice while upholding the sovereignty of the nation in Ladakh region especially in the Siachen Glacier. He appreciated the exceptional gallantry and indomitable courage displayed by the brave soldiers during all major wars and operations since independence which have earned them 605 gallantry and distinguished service awards besides, Battle Honours of Batalik & Turtuk, Theatre Honour Kargil and the coveted Chief of the Army Staff Banner for Valour & Sacrifice, making them one of the most decorated regiments of the Indian Army. He exhorted all personnel to continue to striving hard in pursuit of excellence in all spheres and take a solemn vow to defend the sovereignty of the nation against all odds in the true spirit signified by the Colours presented to the regiment. The president released a documentary movie on Colonel Sonam Wangchuk, MVC, and also interacted with the veterans and 'Veer Naris', besides the gallantry awardees and complimented them. Raised as Nubra Guards in 1948, amalgamated into the Army as regular troops in 1963 and restructured as an Infantry Regiment in the year 2000 post 'Operation Vijay,' the Ladakh Scouts have carved a niche for themselves in the annals of history of the Indian Army, the spokesman said.