Thousands take to streets in Boston protest against hate speech 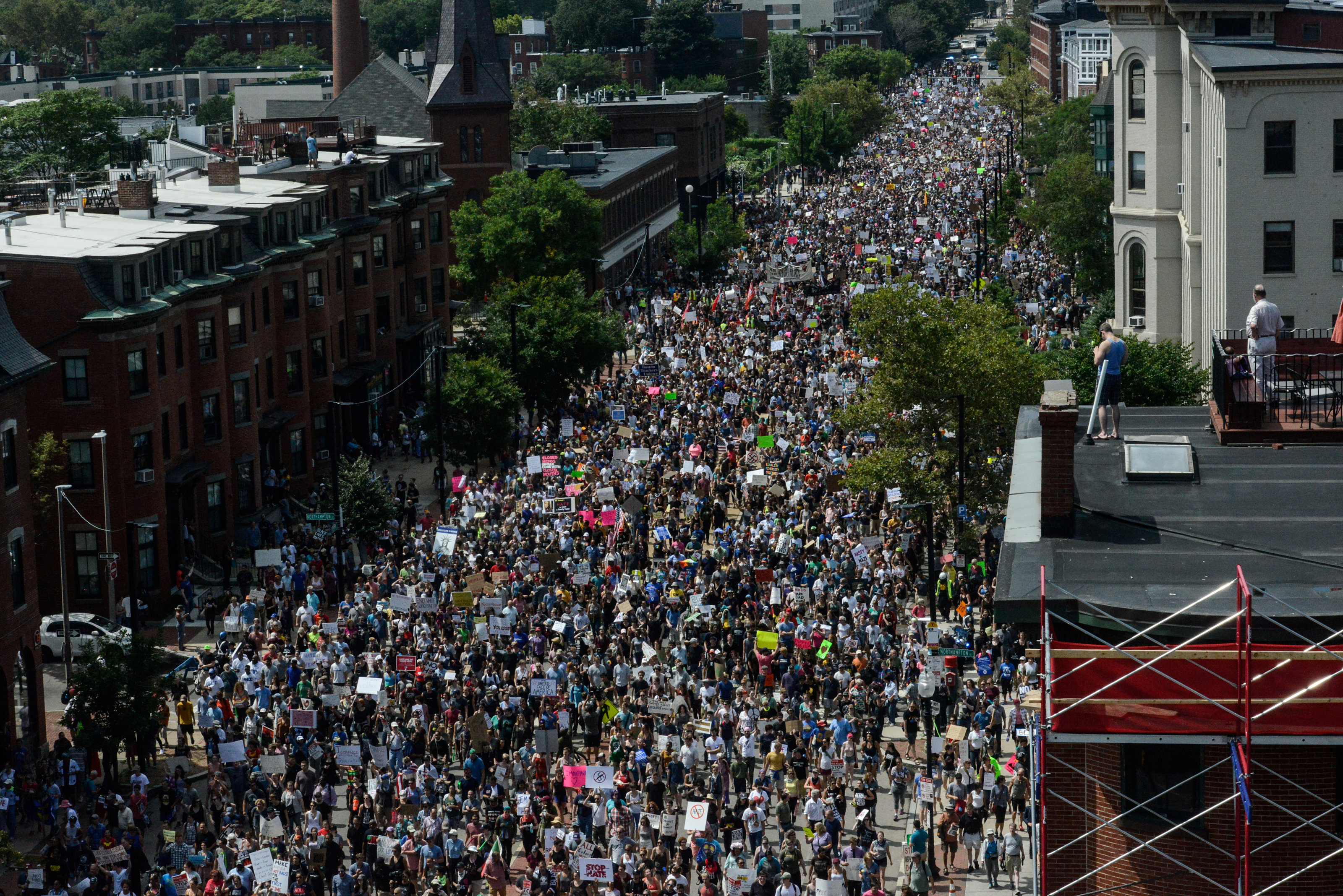 Boston: Thousands of people in Boston protested a "Free Speech" rally featuring right-wing speakers on Saturday, with hundreds of police mobilised to prevent a recurrence of violence that left a woman dead at a Virginia white-supremacist protest last week.
In historic Boston Common park alone, hundreds of protesters who believe the event could become a platform for racist propaganda dwarfed the few dozen rally participants.
The number of protesters was poised to swell exponentially as a march with thousands more people bore down on the park.
Some 500 police officers placed barricades to prevent vehicles from entering the park, the nation's oldest. To keep the two groups separate, they also built a cordon around the site of the rally.
Last weekend's clashes in Charlottesville, Virginia, where one woman was killed in a car rampage after bloody street battles, ratcheted up racial tensions already inflamed by white supremacist groups marching more openly in rallies across the United States.
White nationalists had converged in the Southern university city to defend a statue of Robert E. Lee, who led the pro-slavery Confederacy's army during the Civil War, which ended in 1865.
A growing number of U.S. political leaders have called for the removal of statues honoring the Confederacy, with civil rights activists charging that they promote racism. Advocates of the statues contend they are a reminder of their heritage.
Duke University removed a statue of Lee from the entrance of a chapel on its Durham, North Carolina campus, officials said on Saturday.
Organisers of Saturday's rally in Boston have denounced the white supremacist message and violence of Charlottesville and said their event would be peaceful.
"The point of this is to have political speech from across the spectrum, conservative, libertarian, centrist," said Chris Hood, an 18-year-old Boston resident who stood among a crowd of a few dozen people who planned to join the Free Speech rally. "This is not about Nazis. If there were Nazis here, I'd be protesting against them."
Last weekend's violence sparked the biggest domestic crisis yet for U.S. President Donald Trump, who provoked ire across the political spectrum for not immediately condemning white nationalists and for praising "very fine people" on both sides of the fight.
Two male rally participants wearing Trump's red "Make America Great Again" campaign hats attempted to enter the protest pen that police had set up to keep the two sides separated. They were swarmed by black-clad protesters, some with their faces covered, as the crowd screamed "go home" and "no hate" at them.
Beyond the Boston rally and march, protests are also expected on Saturday in Texas, with the Houston chapter of Black Lives Matter holding a rally to remove a "Spirit of the Confederacy" monument from a park and civil rights activists in Dallas planning a rally against white supremacy.
Boston authorities had roadblocks in place to avert car attacks like the deadly one carried out in Charlottesville by a man said to have neo-Nazi sympathies against counter-protesters and a similar spate of attacks by extremists in Europe, most recently Barcelona.
Boston Mayor Marty Walsh had asked protesters to avoid Boston Common, saying their presence would draw more attention to the far-right activists. He joined the crowd of thousands assembling in Boston's historically black Roxbury neighborhood early on Saturday.
"These signs and the message so far this morning is all about love and peace," Walsh told reporters. "That's a good message."
Monica Cannon, an organiser of the "Fight White Supremacy" march, said it was a necessary move.
"Ignoring a problem has never solved it," Cannon said in a phone interview. "We cannot continue to ignore racism."
The Free Speech rally's scheduled speakers include Kyle Chapman, a California activist who was arrested at a Berkeley rally earlier this year that turned violent, and Joe Biggs, formerly of the right-wing conspiracy site Infowars.
Antonio Vargas, a 20-year-old student at Gordon College, joined the protest march.
"I believe in equality," Vargas said. "I believe race shouldn't define the pattern of your life or the result of your life.
"There also is a time to stand up and not be silent."