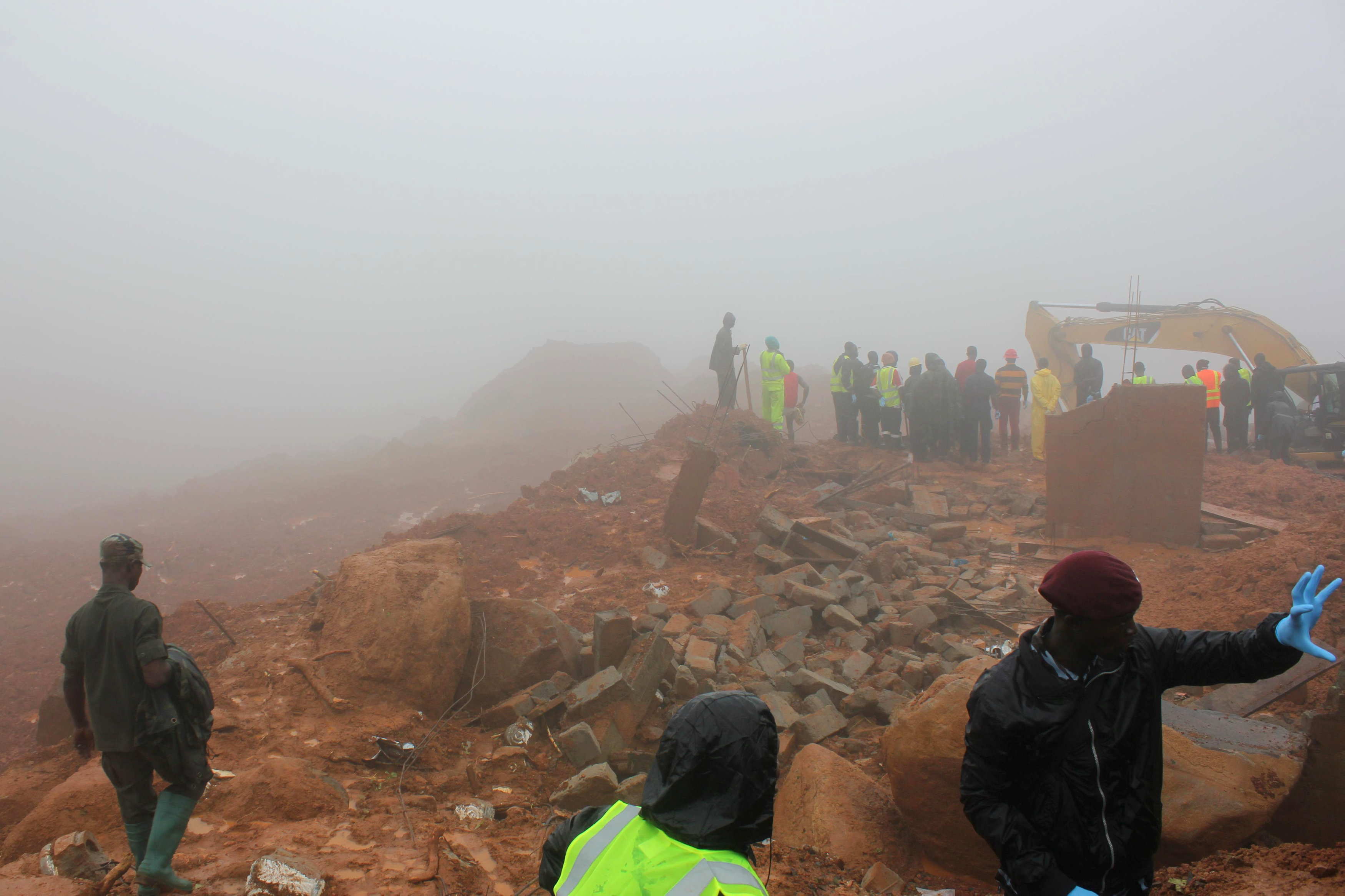 Freetown/Dakar: Rescue workers have recovered 270 bodies so far from a mudslide in the outskirts of Sierra Leone's capital Freetown and the search continues for more, the mayor said on Tuesday.
Dozens of houses were covered in mud when a mountainside collapsed in the town of Regent on Monday morning, one of the deadliest natural disasters in Africa in recent years.
"We have a total of 270 corpses which we are now preparing for burial," Freetown mayor Sam Gibson told reporters outside city hall.
A mass burial will free up space for more bodies in the central morgue, which is overloaded, a Reuters witness said.
President Ernest Bai Koroma urged residents of Regent and other flooded areas around Freetown to evacuate immediately so that military personnel and other rescue workers could continue to search for survivors that might be buried underneath debris.
Rescue centres have been set up around the capital to register and assist victims, he said in a television address on Monday evening. Meanwhile, thousands of people in Sierra Leone left homeless by the mudslide urgently need food, shelter and healthcare, aid agencies said on Tuesday, as they raced to prevent outbreaks of fatal diseases such as cholera and typhoid.
A mountainside collapse buried dozens of homes as people slept in one of Africa's deadliest mudslides in decades.
"We estimate that at least 3,000 people are homeless... they need shelter, medical assistance and food," Sierra Red Cross Society spokesman Abu Bakarr Tarawallie said by phone.
"We are also fearful of outbreaks of diseases such as cholera and typhoid," he told the Thomson Reuters Foundation from Freetown. "We can only hope that this does not happen."
Contaminated water and water-logging often unleash potentially deadly diseases like cholera and diarrhoea after floods and mudslides.
Torrential flooding has also destroyed buildings and covered homes in low-lying areas of Freetown, agencies said.
"Houses have been totally submerged and washed away," said Ramatu Jalloh, advocacy director at Save the Children. "Families are trying to gather their lives together but they have lost their homes, all of their possessions, their whole livelihoods."
The United Nations children's agency (UNICEF) is providing trauma counselling and therapy to families and children in the dozen-odd communities struck by the mudslide.
"You can see people openly grieving... there is a lot of hurt to address," said UNICEF spokesman John James.
Britain's aid department said it is sending assistance, having invested in disaster preparedness and emergency response since the Ebola outbreak which ravaged the former British colony from 2014 to 2016, infecting 14,000 people and killing 4,000.
"From stopping the Ebola outbreak in its tracks to helping the country rebuild after this deadly event - the UK continues to stand by the people of Sierra Leone," said Priti Patel, the minister of the Department for International Development.
Several aid agencies told the Thomson Reuters Foundation they were bracing for more heavy rainfall in the coming days.