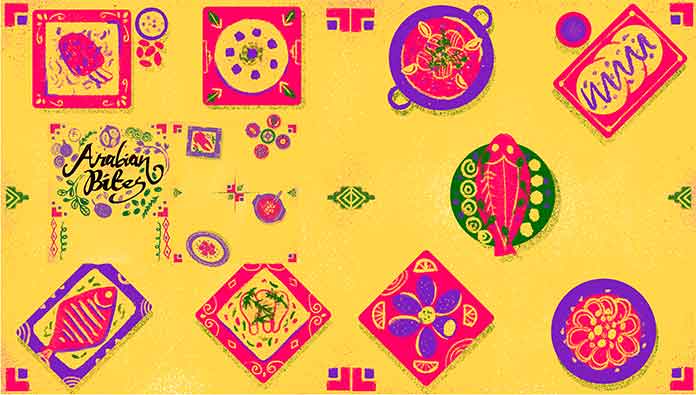 “Made in Oman” is how people used to tag me because of the fact that I was born here. Despite this moniker, I never had the chance to really get to know the foods of this country, let alone the true flavours of the rest of the Middle East. But when I left Oman, I was surprised to find that Arabian baharat had etched a permanent place for itself on my tastebuds, whether I knew what it was called or not. See, I’m a huge foodie, not that I like to cook, but I do love to eat. So on a visit to the Muscat Festival this year, my first stop was the food stalls. I began tasting a variety of dishes from different parts of the Middle East. They were so unique and different from each other. Pardon my ignorance, but up to that point, Arabian cuisine was just kebabs and hummus to me. My curiosity and appetite were peaked, so I embarked on a quest to discover the classic dishes of 13 Middle Eastern countries, without leaving Muscat. Here’s a sampling of what I found.

KUWAIT Zubaidi Fish
Kuwait doesn’t have a distinctive staple per se but seafood has always been an essential part of the diet for Kuwaitis. Silver pomfret, also known as Zubaidi fish has been a favourite since the seafaring days and even now Kuwaitis rush to the fish market on weekends to stock up on them. The fish is marinated with essential Kuwaiti spices and served by placing the fish neatly on a bed of steamed basmati rice. Before serving the fish is marinated so that flavours get mixed thoroughly and the Zubaidi fish is also sometimes served with sauces and chutneys made of tomatoes called dukkous al tamat. Have a hearty Zubaidi fish and rice meal at Shabestan Restaurant (+968 2469 6000) in Bareeq Al Shatti, near Grand Hyatt.

EGYPT Hamam Mahshi
Small pigeons have been loved by Egyptians for centuries, not as pets, but as delicacies. Rows of mud brick lofts housing hundreds of pigeons along the Nile is not an uncommon sight in Egypt. Egyptians like it best when the dark meat squab are stuffed with green wheat grains called freekeh or served with Bulgur or rice in a dish called hamam mahshi. Often served during festivals, weddings, and other important events. Here in Muscat, you can try this speciality at Kusharina (+968 2202 7011) in Qurum on Tuesdays and Fridays. Fair warning, one stuffed bird is ample enough to feed four hungry mouths.

JORDAN Mansaf
Known as the pride and joy of Jordanians, mansaf is the national dish of Jordan. Historically, mansaf is a Bedouin tradition which literally means a large tray. This dish is so popular all across the Middle East that people tend to look at you with some disdain if you ask them what it is (yes, I speak out of experience). The protagonist, or must I say, the victim of the dish is lamb, which is cooked in jameed a dry yoghurt, and served on a bed of rice with dry fruits and nuts. Unlike in many Arabian dishes, lamb cannot be replaced with chicken or beef for mansaf, as for the Jordanians mansaf is one element of their culture that cannot be tampered with. Traditionally, the big tray of mansaf is kept in the centre of a round table and people sit around it and eat it with their hands. However, you can order your own personal serving of mansaf in Oman at the Mansaf Beit Al Deyafa Rest
(+968 9354 9398) in Qurum.

SYRIA Kibbeh
Kibbeh was one of the few Middle Eastern dishes I had heard about before I started my culinary journey and it most certainly is one of the most delicious food. This simple Syrian appetiser is basically a deep-fried, oval shaped meat ball inside a bulgur coated shell. They have an interesting, crunchy texture, and the stuffing usually includes minced meat, pine nuts, and onions. To enjoy this mouth-watering meaty snack, visit Damascino Restaurant (+968 9777 3009) in Al Khuwair near Safeer International Hotel.

YEMEN Saltah
I had no clue about Yemen’s national dish, or any Yemeni dish for that matter, until I started this research. I began digging and discovered that something called saltah was their specialty, and I headed to a Yemeni restaurant in Al Ghubra to try it out. I was served a huge tray filled with lettuce, olives, tomatoes, cucumbers, and the likes. This wasn’t what I was expecting, so I called for the chef and asked him if this was saltah. He said, “Yes ma’am, this is saltah”. Wrong dish. I learnt later that the term saltah is actually derived from the word salatah, which in Arabic means salad.
Saltah is slightly different from most other Arab dishes in that it doesn’t give much importance to meat, rice, or spices. It is essentially a meat broth called maraq with tomatoes, potatoes, pepper, garlic, and eggs added to it. The main component of the dish is a whipped fenugreek condiment called hilbeh which is added to the bubbling brew at the very end, lending its unmistakable fenugreek flavour and thickening the broth into a hearty stew to dunk flatbread into. Be sure to pronounce saltah properly when you go try it at Al Maida (+968 2454 2453) in Seeb so you don’t end up with salad.

OMAN Shuwa
The first time I heard about shuwa was after Ramadan when a relative gave me a huge piece of meat wrapped in foil. When he told me that it was cooked underground I started bombarding him with questions he didn’t have answers for. After spending a few more Eids in Oman I got better acquainted with shuwa and started loving it in all of its forms. Authentic shuwa is meat coated with oil and spices such as red pepper, cloves, or chilli, wrapped in banana leaves, stuffed in a palm frond bag and cooked in underground ovens or shuwa pits overnight. It is the Sultanate’s favourite main course, especially during festivals and weddings. Off late, in Oman, there are many variations and fusions of shuwa. For a classic, portion for one, you can head to Bin Ateeq in Al Khuwair, Al Maida in Qurum, or Kargeen Cafe in MQ, but the most delicious modern shuwa can be found tucked into sandwiches at Shuwa Express (+968 9807 2498) in Bareeq Al Shatti.

QATAR Machbous
Machbous is a typical Qatari meal that looks a lot like biryani. So obviously it has spiced rice and meat that can be flavoured with rose water or lemon. Any type of meat can be used, and the meat can even be swapped for vegetables (which is quite rare). It is probably due to the geographical location of Qatar that machbous has become the most important dish of the nation as being a peninsula in the Arabian Gulf, travellers from Iran and India carried aromatic spices to Qatar which were later adopted and used by the Qataris in their dishes, like this mildly spiced, Arabesque biryani. Go to Orient (+968 9691 1140) in Azaiba to taste Chef Issa’s fantastic version of spiced machbous.

UNITED ARAB EMIRATES Harees
Harees is an important Emirati dish that is enjoyed all across the GCC, especially during Ramadan and Eid. It is a filling meal that is sometimes served at Iftar to break the fast as it is easy on the stomach. When I saw harees for the first time it looked like porridge to me but when I ate a spoonful, I realised how much more delicious and flavourful it was. Wheat berries are cooked in a little olive oil with salt and then boiled meat until the whole thing melts into a delicious stewy-mash. Apart from being supremely delicious, harees also has great nutritional values and is easy to make. There aren’t many Emirati restaurants, even in the UAE, but you can order a plate of harees from the Omani restaurant Orient (+968 9691 1140) in Azaiba.

LEBANON Kibbeh Nayeh
There is a common misconception that kibbeh is just deep fried meat balls. However, in Lebanon, people tend to go out of their way to experiment with different variations of kibbeh by grilling, baking, boiling, and even serving it raw in a dish called kibbeh nayeh. This raw minced meat is combined with bulgur and a mix of spices, kneaded together with cold water and served with a drizzle of olive oil and served immediately, raw. To enjoy mouth-watering delicious kibbeh nayeh in a clean, well-lit Lebanese setting, visit Al Jood Restaurant (+968 24472630) in Al Khuwair behind the Old Turkish (Istanboly).

SAUDI ARABIA Kabsa
Kabsa, Saudi Arabia’s national dish is another dish that reminded me of biryani. What makes it different from the other Arabian rice dishes, according to me, is the mildness in taste due to the limited use of spices. However, spices like cumin, black pepper, cinnamon sticks, and nutmeg are used while preparing this Saudi Arabian dish. The meat used in the kabsa is grilled or barbecued separately and then served atop the rice. However, there are other traditional ways of cooking the meat such as mandi and mathbi. In the mandi style of cooking, the meat is roasted under the ground whereas in the mathbi format it is cooked on flat stones and then served with the grains. Try a variety of kabsa variations at Bin Ateeq (+968 2447 8225 )in Al Khuwair.

IRAQI Masgouf
Masgouf, a Baghdadi specialty and considered by some the national dish of Iraq, traces its origins to Southern Mesopotamia. The term masgouf doesn’t refer to the food itself, but the technique of cooking. An oily, fresh water fish (carp) is caught, cut into two identical halves, and basted with a marinade olive oil, and rock salt and sometimes turmeric, and then hung from wooden sticks over an open fire, so it looks as though the ‘cooking’ fish are swimming through the flames. What makes the masgouf unique is the delicious, smokey, clean fish flavour, and the mango or tomato chutney that is usually served alongside the fish with fresh flatbread and herbs. Try it at Iraqi House Restaurant (+968 9952 6659 ) in Qurum, near Retro Burger.

BAHRAIN Khubz with Mahyawa
Khubz is a unique Bahraini bread which is a lot like a chewy pita bread, which is baked in a special clay oven. Mahyawa is a tangy sauce made of fermented fish, oil, and spices. A favourite snack in Bahrain, and throughout the Gulf is mahyawa smeared over flatbread and baked until crispy. You might think it sounds too simple, but trust me, when the pungent sauce and the crisp bread come together, it is one terrific, and intense, combo. Try it at Kargeen Cafe (+968 9925 3351) in Madinat Sultan Qaboos.