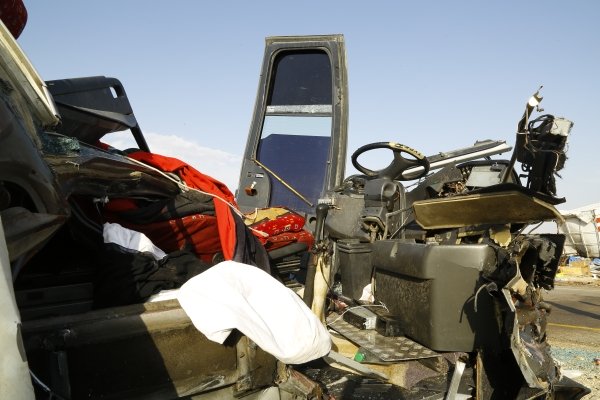 Muscat: Truck drivers, who spend hours driving on the 1,200km-long Salalah-Dubai road, have expressed concerns about road safety following Tuesday’s accident, which claimed 18 lives.
“Out of the 1,200km, approximately 800km to 900km has to be driven in a single lane. There aren’t lights at many places, road surface markings are not visible and rubble from the wadis (valleys) will be on the road after rain,” Zafarullah Khan, a Pakistani driver, driving trucks on the Salalah-Dubai route for the last 18 years, told the Times of Oman.
“Without praying to the Almighty, I don’t get behind the wheels to ply on this road. Our alertness and experience are not enough to be safe, the Almighty’s blessings are also needed,” Khan added.
Stay ahead of the rest and download our free WhatsNews app for Apple, Android or Blackberry
“We drive at a speed of 70km per hour. We know the risks involved in driving on the single lane of the Ibri-Fahud road. However, some drivers in small vehicles, such as cars and jeeps speed up on these roads.
They don’t understand that even a small mistake can cost their lives and that of others,” Sahil Abbas, another Pakistani driver, who has been driving on the road for the last four years, said.
**media[347950]**
According to Khan and Abbas, they don’t drive after 11 pm till 6 am, as it’s not at all safe on a single-lane road, where there are not enough street lights.
“Street lights are available only at fuel stations and rest areas, which are also rare,” they added.
Businessmen in Ibri, who use the Ibri-Fahud road, also said extra care is needed while driving on the road.
“If it rains, the wadis overflow onto the road. After the rain is over and water recedes, rubble remains on the road. If we are not careful, that’s enough to cause an accident,” said V Thampan and his friends, residents of Ibri.
Meanwhile, Shaham Al Shahomi, the Majlis Al Shura member from Ibri, said the Ibri-Fahud road is a risky one to drive.
“The road was originally built to meet the needs of oil companies need. However, the public started using it. There have been demands from public to improve the safety standards of the specific road,” the Shura member added.
According to the Shura member, the public started using the road to save a few km of driving.
There are two ways to reach Dubai from Salalah. One is the Salalah-Dubai via Adam and the other is via Fahud-Ibri.
Recently, the Oman government had awarded contracts for two major segments of the Adam-Thumrait road’s dualisation project, giving a much-needed fillip to efforts of the government aimed at resolving traffic problems.
Mark Pudwell, training manager at Competence HR, said driving anywhere comes down to driving given the conditions available, whether that’s on a black top or graded road, well-lit or no highway lighting at all, it should make no difference.
“If drivers drive commensurate with the road conditions, then incidents like this tragic one in Fahud will be greatly reduced,” Pudwell added.
Neelesh Sogani, corporate HSE manager at Powertech Engineering LLC, who is also involved in many road safety initiatives, said authorities can learn a lesson from this incident and survey the route which is widely used for passenger bus travel.
“Passenger bus operators should avoid using such single-lane roads or poorly lit routes during night, truck movement should be restricted at night and the roads should be upgraded with better lighting, more signages and a hotline should be run for offenders,” Sogani suggested.
He added that if the rule of wearing a seat belt by passengers in buses and those sitting in the back seat of care is enforced strictly, fatalities and injuries could be reduced further.
Meanwhile, Pudwell told TOO that the benchmark for safety standards of vehicles and drivers set by the Oman Society for Petroleum Services should be seen as the minimum standard for commercial vehicles used on all roads within Oman. Last year in July, seven people died, five were severely injured when a bus heading to Salalah was involved in a collision with a car near Haima.