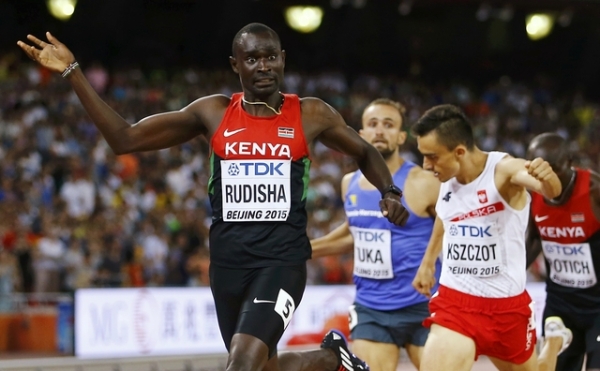 Melbourne, Kenya's doping problems were caused by "foolish" young athletes desperate to win races and cash in on the sport, David Rudisha said on Wednesday, but the Olympic 800 metres champion hopes his country is on the right track to restoring its reputation.
The 27-year-old, who lit up the 2012 London Games with a brilliant world record performance in the 800m final, has been distressed by the allegations of doping and corruption that have rocked the East African country's athletics programme.
Kenya has been hugely successful in middle and long-distance running for decades and remains a global leader on the track and in big-city marathons, but some 40 of its athletes have been banned for doping in the last three years.
The World Anti-Doping Agency has given the country an April deadline to implement new anti-doping measures or risk non-compliance, which could pave the way for a ban on its track and field athletes competing at the Rio Olympics.
"It's really sad, it's really unfortunate that this is happening because Kenya previously has a really good reputation," reigning world champion Rudisha told Reuters in an interview in Melbourne on Wednesday.
"And for many years Kenya has been doing well on the athletics stage, winning championships without this problem. A few years ago this problem has been coming.
"But it's really tough. Because these young athletes who are desperate to make money, to win races, they end up being fools and getting into these drugs."
Allegations of corruption also hit the national governing body, mirroring the wider scandal that plunged the International Association of Athletics Federations into crisis last year and triggered Russia's suspension from international athletics.
Athletics Kenya (AK) Chief Executive Isaac Mwangi was provisionally suspended by the IAAF last week after two local athletes accused him of seeking bribes to reduce doping bans.
Three other senior AK officials were suspended in November, including former president Isaiah Kiplagat, over corruption allegations.
As Kenya's preeminent track star and a pin-up for world athletics, Rudisha's ineligibility to compete at Rio under a blanket ban would be a massive blow for the sport and the Games, not to mention the runner's personal aspirations.
Infrastructure Issues
Rudisha told reporters that he did not feel the doping problem was widespread in Kenya, but said the country lacked infrastructure to monitor the thousands of runners.
"A lot of education needs to be done," he said.
"Like some of the countries which are not having a lot of infrastructure -- we don't even have a lot in Kenya -- and you find that it's very difficult for the anti-doping agency to control this situation because there are thousands and thousands of Kenyans training out there and only a few of them are on the WADA list.
"You can imagine how difficult (that is)."
Rudisha would not comment directly when asked whether he was confident his title defence would go ahead but said he was hopeful Kenya and the sport's reputation could be restored.
"We hope that things are in place," he told Reuters of Kenya's battle to become WADA-compliant before the deadline.
"We are optimistic that these things are going to be wiped out completely so that our sport will be clean and athletes can compete fairly. So we can all celebrate that everybody who has worked hard deserves what he gets."
Rudisha's world record of one minute 40.91 seconds at London broke his own mark set in 2010 and was described at the time by British middle-distance great Sebastian Coe, a former 800m world record holder and now the embattled president of the IAAF, as "the performance of the Games".
Rudisha, who will open his season at the IAAF Melbourne World Challenge on Saturday, said his London time would be hard to beat.
"It's tough, we can't be seeing a world record every day, it's something special," said Rudisha, who was dressed in track-wear on a steaming, hot day at Melbourne's Botanical Gardens.
"I broke it in 2010 and 2012, so you can see it's tough. I'm looking forward to (trying), but getting a time close to the record would make me happy.
"But it will be tough to beat it. We'll see how the year goes."
Having suffered injury problems between the Olympic years, Rudisha was positive about his fitness leading into his Rio buildup and dismissed the idea his motivation might wane after the Games.
"I have a lot of passion for the sport of running. I've been in the sport for nearly 11 years, since the world youth (championships)," he said.
"It's like part of my life now. I'm happy that I've been able to achieve all the titles that any athlete would wish to have achieved.
"There are those who are motivated by doing it more. As much as I still feel that I am strong I want too see how far my talent will take me. And that is what I am looking for -- to see still how far I can go."