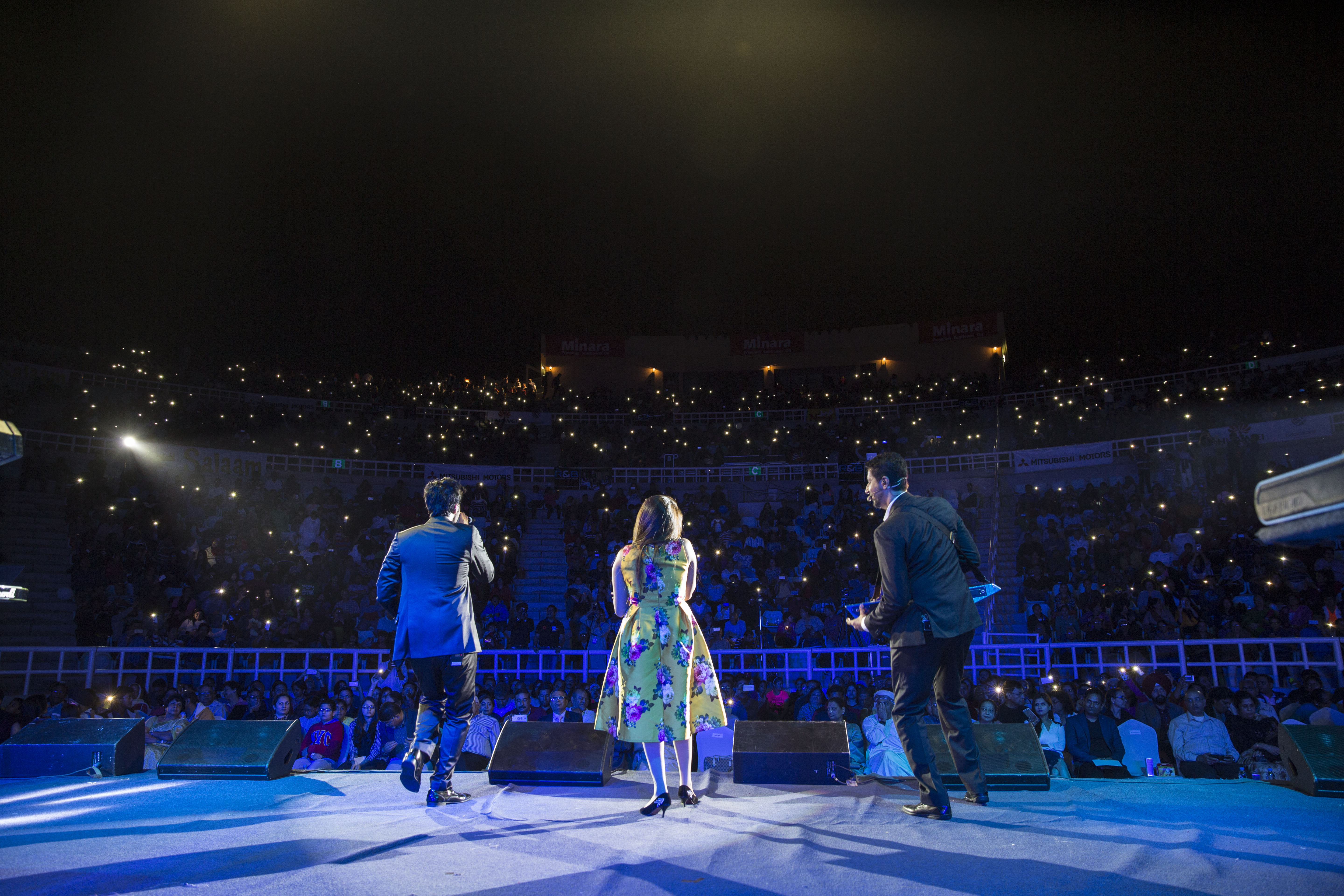 One of the most popular music composers of India, Salim-Sulaiman, who have given fans across the globe many super hit songs of all genres ranging from devotional to inspirational and, of course, peppy Bollywood numbers such as Aaja Nachle, Chak De! India, Rab Ne Bana Di Jodi, and for films like Fashion, Rocket Singh: Salesman of the Year, Kurbaan, Band Baaja Baaraat, Ladies vs Ricky Bahl and many more performed in Oman last month at the City Amphitheatre, Qurum. Apart from composing music for over a 100 Bollywood films and television shows, the duo has also collaborated with international artists to record the anthem for the 2010 FIFA World Cup.
During their visit, they did not miss a single chance to interact with their fans, be it at the press conference at R&B in Muscat Grand Mall or the brief fan meet-up at the Mitsubishi showroom later in the evening. There could not have been a better start to the year than making the much awaited Salim-Sulaiman concert happen in Oman. I, being a huge fan of their songs myself, danced my heart out to the tunes of Aivayi Aivayi, taken inspiration from Aashayen, especially during school exams, and felt close to home in spite of being miles and oceans away whenever I heard Chak De! India. So when I got the opportunity for a quick exclusive interview with the most humble, yet the most talented musicians I’ve ever met I grabbed it. Well, who wouldn’t.

Tell us about your journey to Bollywood?
Sulaiman: Our journey started very early on in our lives. Our first movie was a background score we did for a movie called Hamesha. Director Sanjay Gupta was experimenting a lot at that time. He was editing his film in one of the studios and we were composing music for a corporate project. He heard the music and said he loved the kind of stuff we were doing and gave us an offer to do the background score for his film. So that’s where it all started.

Who is your inspiration?
Salim: Ustad Zakir Hussain, undoubtedly. Sulaiman learnt from his father, Abbaji Allah Rakha Khan, and as children we used to see him play. But it’s not just about him being a musician or a maestro. We learnt so much from him as a human being.
At a very early age we learnt how important it was to be a good person first. It, in turn, helps you to be a good musician eventually as good human qualities help you feel your music better and create music for much bigger subjects, create that emotion and passion in your music. So he is one of our biggest idols. Honestly, I don’t see why you can’t be a good human being if you’re a great musician. In fact, your greatness as a musician only goes three folds up if you have good human qualities.

Which song was your ticket to fame?
Sulaiman: Our first big song was Tauba Tauba Ishq Mai Kariya from the film Kaal. Chak De! India was a big milestone which ended up becoming the country’s sports anthem. And more than fame, it’s about doing music because it’s our passion and is an extension of Salim Sulaiman. So we don’t do this for fame but to give back to people what we’ve received from them. So, it’s an exchange which we hope will continue forever.

How do you create your music?
Sulaiman: Salim creates the melodies and I create the rhythm. Salim sits with the lyricist and I sit on the mix and sometimes we bleed into each other.

Would you call yourself a two-person army?
Salim: Well, we have a fantastic team. There is a young guy, Raj Pandit, who works with us and helps with arrangements and production. He’s become an important part of us and our team. And then there is Aftab who mixes our songs.
And I feel that music is about people in general as there are so many contributions from so many people who end up giving their heart out, including singers, other musicians and even our fans who become our family as they all inspire us to make the kind of music we do.

What is your favourite style of music and song?
Sulaiman: We love making sufi music and we’ve realised that all our sufi songs such as Shukran Allah, Ali Maula, Tujh Mein Rab Dikhta Hai are liked by the people. Ali Maula is my personal favourite as we composed that song as a prayer. We never intended for it to be in a film. When Karan Johar heard it, he told us that if we loved the song so much, then it needs to reach as many people as it can and that’s how it ended up being in Kurbaan.
Salim: I feel that it’s the inspirational songs that have been extremely popular. Like Aashayen from Iqbal became a phenomenon in the country due to its aspirational quality.
Many schools have used that song. For instance, there is a school in Hyderabad that has made the song their school anthem and then there is a Buddhist group in Mumbai that uses this song in their chants. Yeh Hosla has helped people overcome their different problems and struggles.
And, of course, there is Chak De! India. It is no more our song but it is the country’s song. After Chak De!, we’ve done a lot of sports anthems, including songs for the IPL and World Cup.

Tell us about the FIFA World Cup song?
Sulaiman: There was a friend of ours in Africa who wanted to create a song which came from the Southeast Asian community because in FIFA there was no representation from India, Pakistan or Bangladesh. So he said we should make a song on what Africa has been through in terms of the struggles and their problems over the years and in spite of all that, it now stands with its head held high and is hosting the World Cup. And that’s how Africa you’re a star took birth. We sent the song to the FIFA committee, they liked it and asked us to perform. So we went to the celebration concert and performed in front of 90,000 people.

How has music evolved over the years?
Salim: Change is the only constant.

What’s your take on reality shows?
Salim: I think the concept is fantastic. It gives an opportunity to the young talented people from small towns and villages to show the world what they have.

What happens to the winners and contestants after the show ends?
Salim: Well, you saw one at the concert. I don’t know about the rest of the judges but as far as I’m concerned, I make sure that the people who do very well get associated with us.
We travel a lot with Bhoomi Trivedi and Sriram, both of whom are Indian Idol contestants, and by the end of 2016, we plan to do tours with the children.

A lot of people think that the music now is crap and the music back in their days was the only kind of music worth listening to. Do you agree?
Salim: Yes and no. Yes, because music has changed and people have stopped making timeless melodies, primarily because there is a certain fear of it being boring. Also, the music being made in our country is mostly for films. And the language of movies is also changing constantly. Back in the days, Hindi movies never showed a guy and a girl living together or kissing on screen. So, because the films are changing, the music is also changing and it is only justified.

Would you encourage Yo Yo Honey Singh kind of music?
Salim: I’m a purist. I’ve studied piano and Indian classical music. For me, joy comes from notes, melodies, chord changes, beats, base lines, funk, jazz, fusion. So rap is just a genre that is not very exciting for me.
And I was born and raised in a very different environment. There is a lot of richness in the music I learnt and listened to. We both listen to Michael Jackson, Sting, Ghulam Ali, Mehdi Hassan, Abbaji, Zakir Bhai. I feel these are seasonal songs that will come and go. But Lag Jaa Gale, Tum Hi Ho, Shukran Allah will stay. I don’t think 4 Bottle Vodka will.
[email protected]