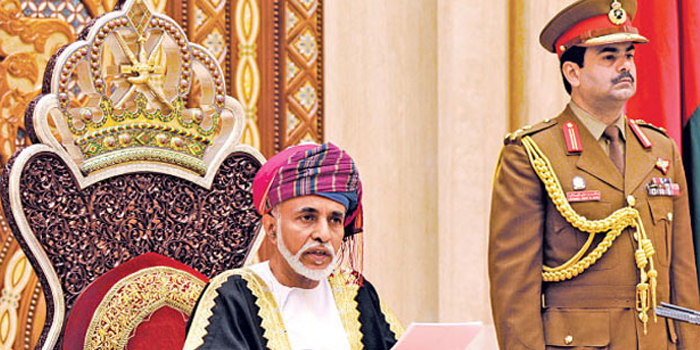 Muscat: His Majesty Sultan Qaboos bin Said has received more cables of congratulations on the occasion of the Blessed Renaissance Day, July 23rd from a number of leaders and senior international officials.
In their cables, they expressed their sincere congratulations along with their best wishes of good health, happiness and long life to His Majesty, the Sultanate and its loyal people further progress and prosperity under the wise leadership of His Majesty.
His Majesty received congratulatory cables from the Custodian of the Two Holy Mosques King Salman bin Abdulaziz Al Saud of the Kingdom of Saudi Arabia (KSA), His Highness Sheikh Khalifa bin Zayed Al Nahyan, President of the United Arab Emirates (UAE), His Highness Sheikh Sabah Al Ahmed Al Jabir Al Sabah, Emir of Kuwait, King Mohammed VI of the Kingdom of Morocco, President Abdelaziz Bouteflika of the People's Democratic Republic of Algeria, President Mahmoud Abbas of the State of Palestine, Chairman of the Executive Committee of the Palestine Liberation Organisation (PLO), President General Michel Aoun of the Lebanese Republic, President Mamnoon Hussain of the Islamic Republic of Pakistan, Sheikh Mohammed bin Rashid Al Maktoum, UAE Vice President, Prime Minister and Ruler of Dubai, Prince Mohammed bin Salman bin Abdulaziz Al Saud, Crown Prince, Deputy Prime Minister and Minister of Defence of KSA, Sheikh Mohammed bin Zayed Al Nahyan, Heir Apparent of Abu Dhabi, UAE Deputy Supreme Commander of the Armed Forces, Sa'ad Hariri, Prime Minister of Lebanon, Nawaz Sharif, Prime Minister of the Islamic Republic of Pakistan and Narendra Modi, Prime Minister of the Republic of India.
His Majesty also received cables of congratulations on this happy occasion from their highnesses, ministers, advisors, commanders of the Sultan's Armed Forces (SAF), Royal Oman Police (ROP) and other security units, honourable members of the State Council, members of the Majlis Al Shura, undersecretaries, judges, Omani ambassadors, heads of the diplomatic missions in the Sultanate, representatives of the international organisations and authorities, sheikhs, dignitaries, citizens and residents.
In their cables, they expressed their sincere congratulations and best wishes of permanent health, happiness and a long life to His Majesty the Sultan. They expressed their pride over the great civilisational achievements made in the Sultanate under the wise leadership of His Majesty, praying to Allah the Almighty to protect His Majesty and grant him success to achieve further aspirations for his people.
His Majesty the Sultan replied to the well-wishers of this glorious occasion, praying to Allah the Almighty to perpetuate health and happiness on them and achieve aspirations for people of their countries, as well as for the return of these happy occasions on them with welfare and blessings.