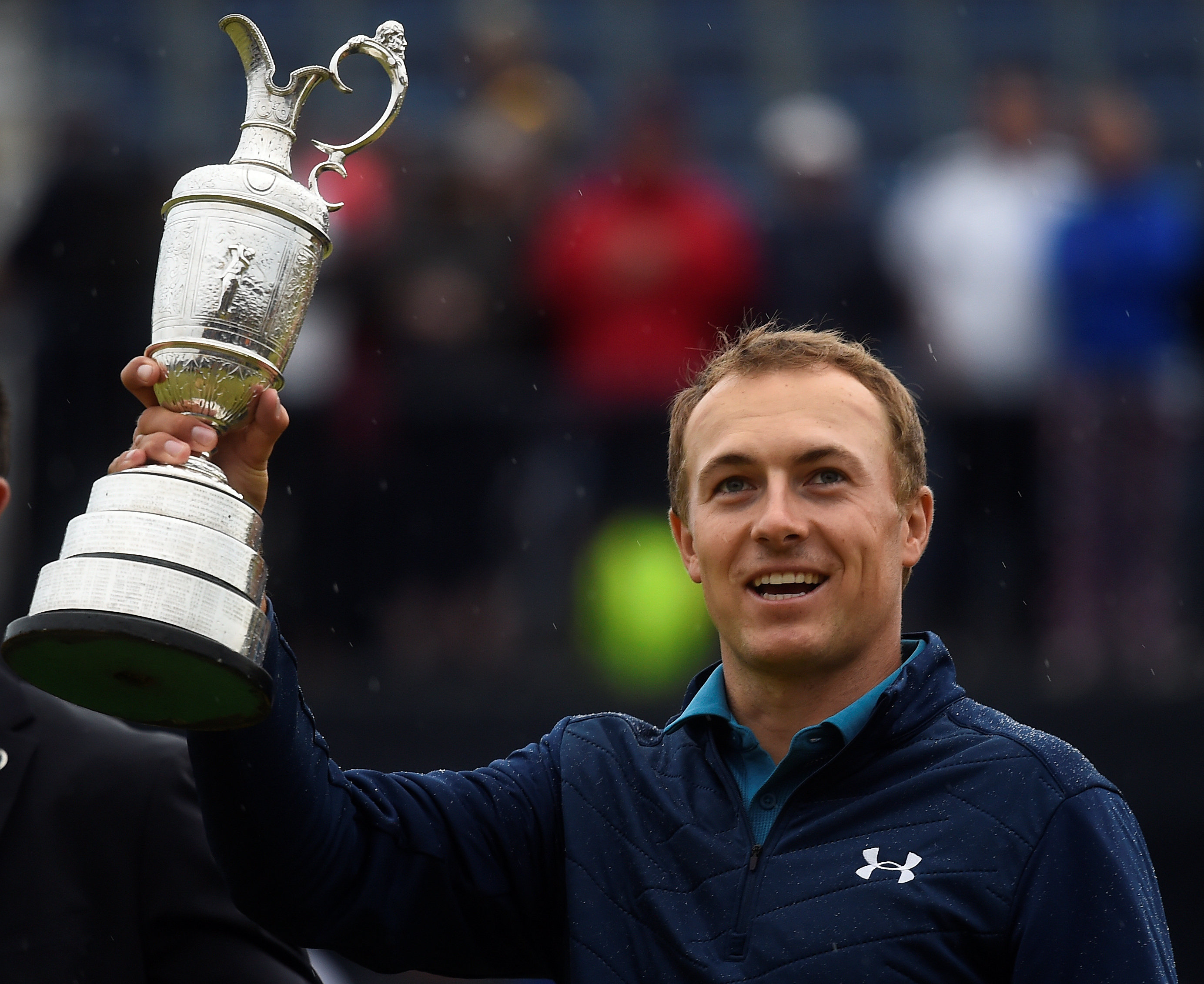 London: Golf's greatest names hailed Jordan Spieth's dramatic triumph at the British Open at Royal Birkdale on Sunday as the new champion savoured his victory by swigging from the Claret Jug Trophy.
Tiger Woods, Jack Nicklaus and Gary Player, the three surviving members of the 'Grand Slam club' who have won all four Majors, saluted the 23-year-old American who will join them if he comes out on top at next month's US PGA Championship.
"Jordan, we are all so happy watching you win the greatest trophy in golf," nine-time Major winner Player said in a social media address to the new champion.
"The example you showed to the young pros who will follow in your footsteps is one they will never forget. The courage, the patience, the fortitude. You are a family man, a gentleman and we love you," the South African said.
Nicklaus, the record 18-time Major winner, paid tribute to Spieth's "guts and determination" while Woods, who's won 14 Major titles, posted on Twitter: "What an incredible way to come back and win."
Few would argue with that after Spieth played the final five holes in five under par to see off the challenge of runner-up Matt Kuchar and secure his third Major to set alongside his 2015 Masters and US Open triumphs.
Spieth's friends Rickie Fowler and Justin Thomas posted pictures on Snapchat of him drinking from his new trophy.
Two years ago, he had also swigged from the Jug in celebration of Zach Johnson's triumph at St Andrews -- but this time Spieth was toasting himself.
Asked by Thomas how drinking from the trophy tasted, Spieth turned to the camera, lowered the Jug and said "fantastic".
Spieth's celebrations will probably continue until at least Thursday, when he celebrates his 24th birthday.
There was more good news for him on Tuesday when the new world rankings saw him rise a place to No. 2 behind Dustin Johnson on the back of his latest triumph.
The next few weeks will be dominated by talk of whether golf's brightest young star can emulate his 2015 feat of triumphing at successive majors by winning next month's USPGA at Quail Hollow.
If he does, Spieth will join golf's Famous Five -- Gene Sarazen and Ben Hogan are the other winners of each Major -- at a younger age than the rest, having already become the youngest American to win the British Open.
Yet brilliant as that triumph was, Spieth knows that luck was on his side during his erratic final round that came so close to disaster on the 13th where he escaped with a bogey after almost losing his ball.
His usual driving accuracy was missing, with statistics released on Monday showing he was only the 24th most accurate player in hitting fairways, behind even the leading amateur, Britain's Alfie Plant, with an average of just 42.9 percent.
Spieth's driving average of 316 yards at the par-five 15th and 17th holes was 13 yards shorter than McIlroy and 18 behind Dustin Johnson, while the new champion proved only third best at hitting greens in regulation with an average of 69.4 percent.
None of these statistics, though, measured the size of his heart. As Zach Johnson tweeted: "(Kuchar) didn't lose it, (Spieth) bowed up & won it."