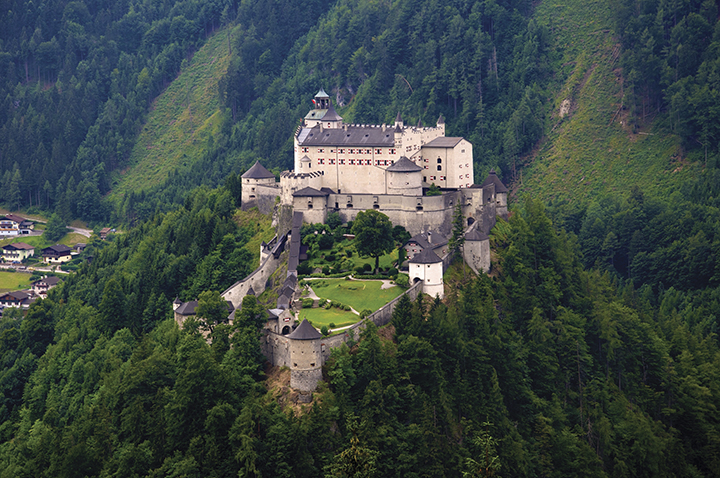 Hohenwerfen Castle, Austria
Overlooking Austria’s Salzachtal Valley, surrounded by jagged peaks of the Berchtesgaden Alps, this castle was primarily a place where kings lived. Later, it was home to archbishops and even prisoners (the structure was a state prison for some period) for more than 900 years. Today, Hohenwerfen Castle is where hundreds of tourists come from all over the world. It is also the site of Austria’s famous falconry centre where hunting performances are held, and visitors can witness these extraordinary events.

The Palace of Pena, Portugal
This splendid castle is situated on a hilltop above the resort town of Sintra, located in the foothills of the Sintra Mountains. Being a royal sanctuary for a long time, the forested terrain is scattered with Clair villas and houses. The palace itself was originally created by King Ferdinand II and is arguably considered one of the greatest constructions of 19th-century romanticism in Portugal, with wonderful architecture and a magnificent interior. The palace of Pena was created in such a way that it is easily visible from any point in the surrounding park. The verdant areas of the beautiful grounds around the castle are perfect places to feel the vibes of the past.

The Alcazar Castle, Spain
The Alcázar of Segovia (literally, Segovia Castle) is an impressive, ancient stone fortification and World Heritage Site located in Segovia, a historic city northwest of Madrid, Spain. The most famous Spanish castle, it was purportedly the inspiration behind Cinderella’s Castle in Walt Disney World (though the information wasn’t confirmed by Disney). The castle looks beautiful and can be seen from long distances as it was built on top of a rocky crag and had no natural defensive advantage, which is typical for most castles. Located near the confluence of two Spanish rivers, Eresma and Clamores, The Alcazar is unique due to Muslim influence. It was originally built by Islamic warriors called Moors (Muslims from North Africa) and is representative of wooden construction in that era. It was highly influenced by Islamic architectural trends and Early Modern Spanish building styles. The Alcázar not only has a beautiful exterior design, but also a magnificent interior.

Predjama Castle, Slovenia
Pedjama Castle is a marvellous place for all castle lovers to visit. It is a Renaissance-style castle located in the centre of a historical region in south-central Slovenia. Constructed in an early Renaissance style, it was built into the mouth of a cave. It is eminently famous in Slovenia itself and in all Europe. It is a wonderful site - picturesque, audacious, and mysterious. Situated in the middle of a towering cliff, it is listed in Guinness World Records for being the largest cave castle in the world.