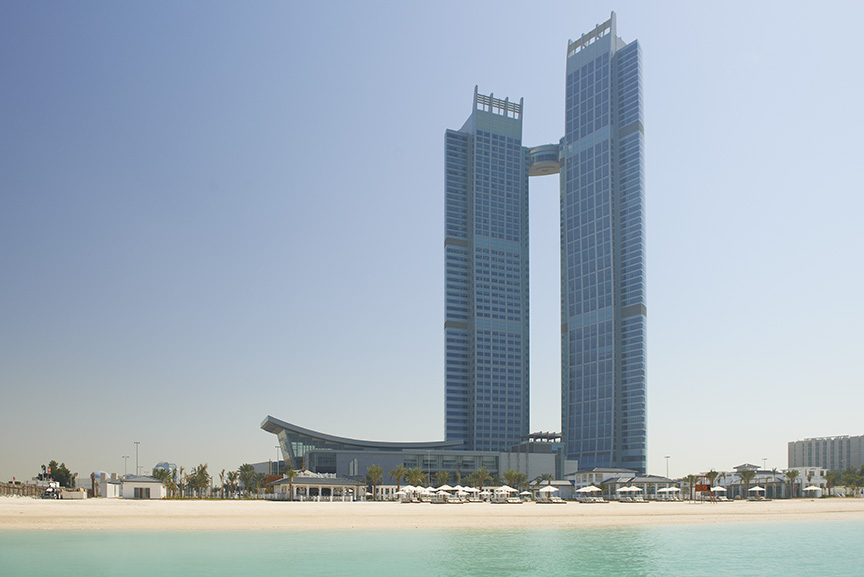 Have you ever stood on the prow of a cruise liner as it ploughs through the ocean, your entire scope of vision filled with the horizon, your senses engulfed by the cerulean of the sky? Perhaps you have experienced that sense of space and freedom as you stand on a mountain-top and stare into the void, you above the world, your cares left way below.
This is how I imagine it may have felt to travel by airship, back when that was a luxury option in times gone by, to gracefully glide through the sky, the clouds your companions as you soaked up the atmosphere (literally).

Until that aviation dreams rises from the ashes of the past (and it’s often talked about) there is one earthbound equivalent that comes close, not only to capturing that feeling of expanse but also to evoking the sense of style and sophistication of the days when zeppelins were the height of chic.

For sheer jaw-drop effect walking into a Grand Deluxe Suite at the St Regis Abu Dhabi has few peers for few feel so open to the elements as this stunning accommodation. These corner suites feature acres of floor to ceiling windows that run along the course of the ‘bedroom’ and through and round the lounge area to create one open expanse that makes 65 square metres feel like 650.

This is achieved by not encasing the sleeping area in walls, instead there is a divider between the bed and the lounge, meaning one can recline and gaze for miles, as Abu Dhabi’s beautiful corniche rolls out before them. And what a view it is: To your left, the azure blue of the sea stretches out, while ahead, the golden strip of beach that runs the course of this 8km waterfront is looked down upon by a city that rises from the coast.

For science fiction fans, this is about as close to checking in to Cloud City in Star Wars as you are likely to get (rather appropriate, as the latest movie was filmed, in part, in the UAE).
What’s so clever is that the suite designers have worked to enhance that sense of space with light tones, the carpet underfoot is plush without being heavy in colour (perhaps in fact to suggest walking on clouds).

That continues into the bathroom which is a delight of white marble, mirrored doors to reflect and project the light, while a freestanding bath sits waiting next to another floor to ceiling window so that bathers stare out to sea as they soak.

For parents with children there is an elegant solution in that the suite connects with the massive ‘superior twin’ room next door, essentially giving the little ones their own bedroom, while a second exterior door can close off your end of the corridor so you’ve no need to worry about the children sneaking off without you knowing it.

Sunset in your suite is mesmerising, with a 270 degree view of dusk spreading across the corniche, the blue overtaken by the red and finally the black of night, punctuated in the sky above by the stars and down below by the traffic which creates a river of light.

As with all St Regis rooms around the world, the room also comes with a butler. I’ve written much about these stars, but what amazes is that this global hotel brand achieves that same level of deft, professional service wherever one stays (somewhere, there must be a giant super butler school).

You’d be forgiven for staying in your suite in the sky for the entirety of your stay and just ordering room service from the butler (not a terrible plan actually) but it is worth returning to earth, if only to gawp at the lobby – its grand split staircase sweeping up before you.
The soft lighting, the plush carpets, the deep red velvet armchairs, the marble columns, all evoke that bygone era where perhaps one could travel by airship. And the intimate setting of the St Regis bar creates the atmosphere of the Victorian era clubs that have begun to be all the rage once again in London (though of course unisex these days as is right and proper).

One of the jewels in the St Regis Abu Dhabi’s crown is its Nation Riviera Beach Club, accessed by what has to be the grandest, most marble-clad subways you’ll ever take.
You emerge by the pristine sands of the corniche into what has become one of the outdoor dining hotspots for this emirate’s socialites.

The pool and cabanas are ‘the’ place to soak up the warm sun, plus this is where parents with young charges will find the Treasure Island Children’s Club, which is a supervised indoor and outdoor club for the little ones which gives mothers and fathers a little time to themselves – treasure indeed (the hotel also babysit while you go for dinner).

Depending on when guests are staying they should most definitely enquire about the ‘brunch in the clouds’ served in the ‘World’s Highest Suspended Suite’, or indeed the Helipad Sunset Supper served at 255 metres up in the air on the highest active helipad in the Middle East (one assumes traffic stops at dinner time).

All in all the St Regis Abu Dhabi soars high in the list of memorable hotels in the UAE by offering a unique blend of beauty (the view, the hotel, the corniche), service (especially the butlers) and sophistication. —[email protected]