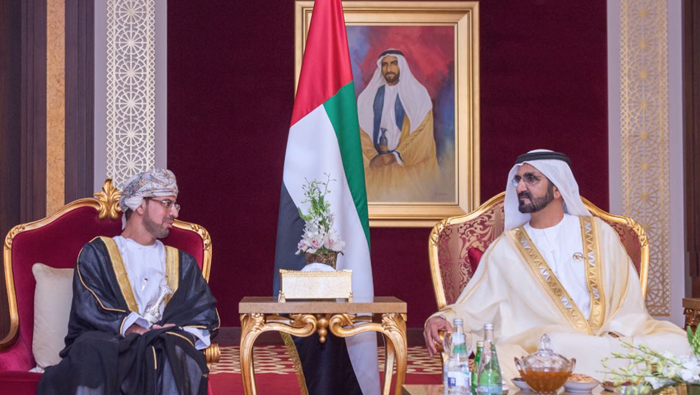 Abu Dhabi: Sheikh Mohammed bin Rashid Al Maktoum, Vice -President of U.A.E, Prime Minister and Ruler of Dubai received at the Presidential Palace in Abu Dhabi on Sunday, Dr. Khalid bin Said bin Salim Al Jaradi, Sultanate’s Ambassador to the UAE to present his credential as plenipotentiary and resident Ambassador to the Emirates.
During the credential presentation ceremony, the Ambassador conveyed greetings and best wishes of His Majesty Sultan Qaboos bin Said to Sheikh Khalifa bin Zayed al- Nahayan, President of the UAE.
He also said that the Sultanate’s government is looking forward to enhancing and developing bilateral relations to serve the common interests of the two brotherly countries. He affirmed that he will do his best to promote the Sultanate’s relations with UAE.
On his part, the Vice-President of the UAE, Prime Minister and Ruler of Dubai welcomed the ambassador and requested him to convey his greetings and best wishes to His Majesty the Sultan and the Omani people further progress and prosperity under the wise leadership of His Majesty. He also pointed out that the UAE government will provide every possible support on all levels to facilitate the mission of the ambassador.
The credential presentation ceremony was attended from the UAE side by Sheikh Hamdan bin Rashid Al Maktoum, Heir Apparent of Dubai, Sheikh Saif bin Zayed Al Nahayan, Deputy Prime Minister and Minister of Interior, Sheikh Abdullah bin Zayed al- Nahayan, Minister of Foreign Affairs and International Cooperation, a number of ministers and officials at the Ministry of Foreign Affairs and International Cooperation and members of the Sultanate’s Embassy to the UAE.