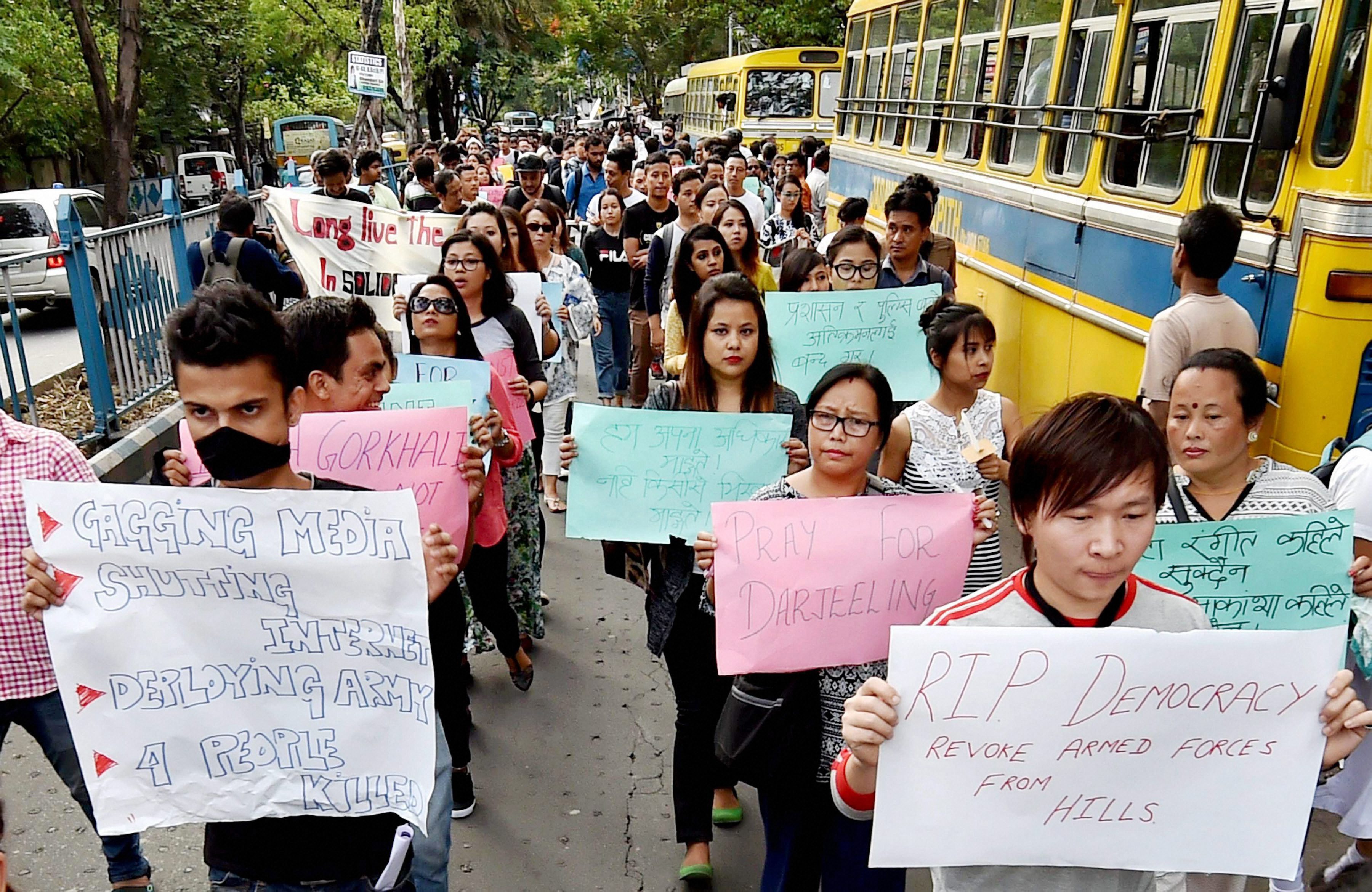 Darjeeling(West Bengal: The indefinite bandh in the Darjeeling hills, which entered its sixth day, will continue until security forces are withdrawn, a GJM-sponsored all-party meeting decided on Tuesday.
The Gorkha Janmukti Morcha (GJM), spearheading the agitation for a separate Gorkhaland since June eight, also decided to withdraw from the tripartite accord on the Gorkhaland Territorial Administration (GTA).
Security forces patrolled the streets of the bandh-hit hills as the indefinite strike crippled normal life. Internet services remained suspended for the third day in the region. Except medicine shops, all other shops remained closed.
Meanwhile, in Gangtok, the Sikkim Democratic Front, the ruling party in this north-eastern state, extended its support to the "democratic demand" for a separate Gorkhaland. It expressed its opposition to the "illegal, undemocratic and unconstitutional" acts committed in Darjeeling. Thousands of people from all walks of life took out candle light march in Gangtok in solidarity with the people of Darjeeling.
GJM spokesperson T. Arjun told reporters in Darjeeling after the all-party meeting, "The indefinite shutdown will continue as the onus is on the West Bengal government to restore normalcy in the hills. They have to withdraw security forces -- both the state, central and all repressive forces."
Several political parties in the hills, including Gorkha National Liberation Front (GNLF), which was till recently an ally of the ruling Trinamool Congress, attended the meeting here, besides some NGOs and apolitical organisations.
Arjun said, "It was also decided at the meeting that the GJM will withdraw from the tripartite accord on the GTA." The tripartite agreement paving the way for the setting up of the GTA, an elected body for the Darjeeling hills, was signed in 2011. The parties to the agreement were the union home ministry, the state government and the GJM.
The GTA administers Darjeeling, Kurseong, Mirik, some areas of Siliguri subdivision of Darjeeling district and the whole of Kalimpong district. The GJM spokesperson said, "We will send letter to the state and the central governments stating that the GTA stands scrapped as the GJM, being one of the signatories, is pulling out of the the agreement."
Asked whether the GJM members will resign from the GTA, he said "We are pulling out of the accord." The parties, which attended the meeting, decided not to participate in the June 22 all-party meet called by the West Bengal government to discuss the prevailing situation in the hills.
"We will not attend the all-party meeting convened by the state government. (Chief Minister) Mamata Banerjee should stop using repressive forces against us. The police should stop violating human rights and making arbitrary arrests," the GNLF spokesman, Niraz Zimba, who was present at the meeting, said.

Arjun said that it was also decided that an all-party coordination committee will be formed which would soon send a delegation to meet Prime Minister Narendra Modi and Union Home Minister Rajnath Singh to press for the demand for Gorkhaland.
Besides, an all-India panel comprising noted intellecutuals and politicians, would be formed to mobilise opinion regarding a separate state, he said. Arjun said that the suspension of internet services in the hills amounted to violation of human rights.
"Internet services in the hills should be restored", he demanded. A meeting of the Sikkim Democratic Front (SDF) leadership in Gangtok, without naming anyone, hoped that peace would return to the Darjeeling hills soon and demands of the Gorkha people would be fulfilled.
The Sikkim Assembly had on March 29, 2011, passed a resolution in favour of a separate Gorkhaland. The SDF appealed to the Centre, the West Bengal government, the people of Darjeeling and the political parties in the hills to ensure that National Highway 10 (Siliguri-to- Gangtok), about a 70-km stretch of which passes through the Darjeeling and Kalimpong sub-divisions, was left open as it was the "lifeline" of land-locked Sikkim.