There was an emotional professionalism: #Anil on working with #Arjun 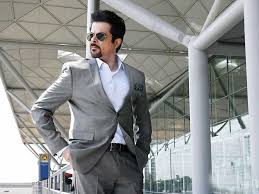 Mumbai: Anil Kapoor will be seen sharing screen space with nephew Arjun Kapoor in Mubarakan, and the actor said it was an emotional experience working with the
young star, whom he fondly calls chachu. The Anees Bazmee-directed movie is a romantic comedy, which will see Arjun in the role of Kartar Singh.

"It has been a wonderful and emotional experience working with Arjun. Someone asked me if there was a rivalry between you two on sets, because you're relative. He's my brother's son. In fact, he's like my own son. But I never call him Arjun, I call him 'Arjun chachu'," Anil told reporters.

The 60-year-old actor said both he and Bazmee wanted to give Arjun his most successful film through Mubarakan. "But, there was a very emotional professionalism. We were competitive, we both wanted to work hard but before any scene, Anees and I would discuss that we were working for the first time with Arjun, so it should be his best film, the most successful one," he said at the trailer launch of the film, here today.

In Mubarakan, which also features Ileana D'cruz and Athiya Shetty, Arjun plays a double role. The actor said double roles have been in fashion since a long time but it's all about how different the treatment is.

"It is not a trend, double roles have been made for the last 50 years. I've already done a double role in Aurangzeb before this. Varun Dhawan is also doing a double
role in Judwaa 2.

"But this (Mubarakan) is not a film where two brothers have separated after birth or anything, this double role is very unique, and has a very western feel to it," said Arjun. The film is scheduled to release on July 28.