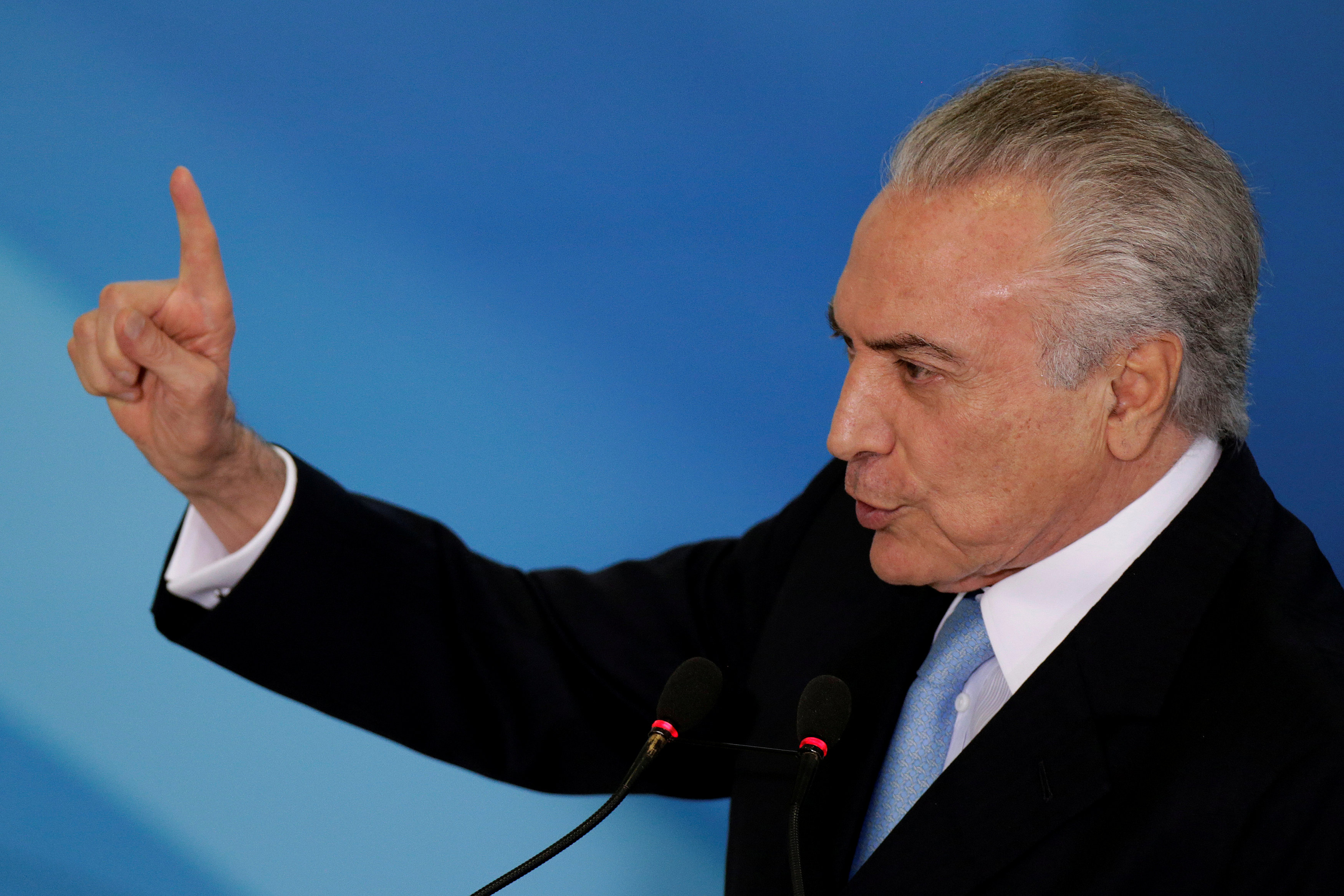 Brasilia/Sao Paulo: Brazilian President Michel Temer denied allegations made by a billionaire businessman in a magazine interview published on Saturday that he led a corruption scheme in which politicians squeezed high-profile executives for bribes, and vowed to sue the businessman.
In a statement, Temer's office said he will take "all appropriate actions" against billionaire Joesley Batista, who told Época magazine that the 77-year-old politician has run a bribe-for-favours scheme at the government since 2010.
In his first interview since striking a leniency agreement with Brazilian prosecutors, Batista told Época that Temer asked for money several times in recent years as he led a group of senior politicians regularly demanding kickbacks in exchange for political favours. "Temer is the leader of a lower house criminal organisation," Época quoted Batista as saying.
"Those who are not under arrest are in the government. They're very dangerous." Temer's lawyers said in the statement released by his office that they will file civil and criminal lawsuits against Batista as early as Monday. Press representatives for Batista and his family's investment holding company, J&F Investimentos SA, were not immediately available for comment.
The coming week already promises to be a tense one for Temer and Batista, one of Brazil's richest businessmen. The Supreme Court is to discuss the validity of Batista's plea deal, and Prosecutor-General Rodrigo Janot could file charges against the president for corruption accusations that Batista made in May.

Temer, in his statement on Saturday, rebuffed Batista's allegations in the Época interview that, saying that the billionaire repeatedly sought Temer's help for his personal benefit but was denied. Temer also attacked terms of the leniency deal that allowed Batista to escape prosecution, saying in the statement that the terms made the billionaire "Brazil's most successful criminal ever."
The statement said Batista's testimonies "puts the blame of his crimes on others, while protecting his real partners." The statement did not identify anyone.
Last week, Temer escaped the threat of ouster as president after Brazil's top electoral court dismissed a case over alleged illegal campaign funding for the 2014 election - in which he ran on the same ticket of former president Dilma Rousseff.
Rousseff was impeached last year on accusation she oversaw the doctoring of budget accounts. J&F agreed to pay a record-setting 10.3 billion-real ($3.1 billion) leniency fine, after Joesley Batista and his brother Wesley admitted to bribing almost 1,900 politicians in recent years.
J&F-controlled JBS SA, the world's No. 1 meatpacker, is being investigated for alleged insider trading ahead of the announcement of the Batista family's leniency deal. Batista denied having ordered insider trades at JBS, according to the Época interview, adding that he believed they were all made in line with the law. He said J&F will sell "as many assets as necessary" to quash concerns about the group's solvency. J&F diversified from meatpacking in recent years, expanding into fashion, home cleaning, banking and pulpmaking with the help of state loans, prosecutors said.