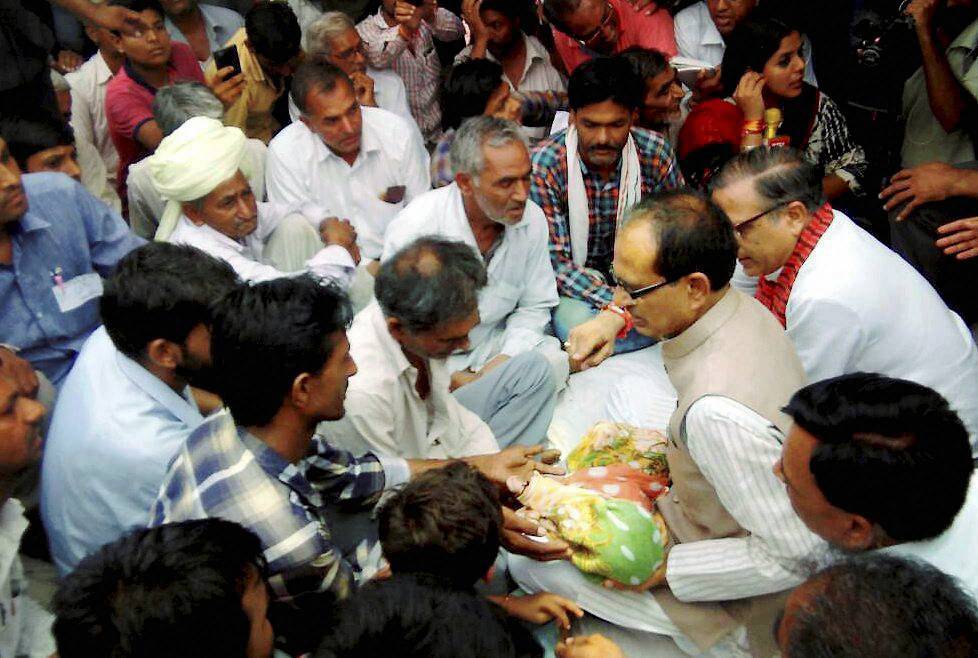 Mandsaur/Bhopal: Seeking to douse the smouldering embers of the farmers' unrest, Madhya Pradesh Chief Minister Shivraj Singh Chouhan on Wednesday visited Mandsaur where six people were killed in police action, and presented Rs10 million to the kin of three of the deceased.
In a gesture loaded with symbolism, Chouhan visited the families of the slain farmers with his wife Sadhna, and promised action against those responsible for their bereavement.
Meanwhile, Congress heavyweight from the central state of Madhya Pradesh Jyotiraditya Scindia, who was on Tuesday detained and prevented from visiting Mandsaur, where prohibitory orders barring assembly of more than four people is in force, began a 72-hour 'Satyagraha' in Bhopal as a mark of solidarity with farmers.
Chouhan, who has been facing a firestorm of political protests following the killing of farmers, reached Mandsaur on a special plane and headed straight to Badwan village to give a healing touch to the family of Ghanshyam Dhakad.
The state government had on Tuesday sanctioned financial aid of Rs10 million for the families of each of the six deceased killed during the peasants' stir. Madhya Pradesh has seen a phenomenal growth in agriculture under Chouhan, clocking an average of 13.9 per cent over the five-year period 2010-15. However, farmer suicides have also gone up because of rural indebtedness.

Chouhan later visited Lodh village and consoled the family members of another deceased farmer Satyanarayan. He then went to Nayakheda in neighbouring Neemuch district to meet the family of Chainram Patidar. On the demand of Chainram's father Ganpat, Chouhan announced a tarred road to be laid from Kuchlod to Nayakheda, a community centre in the village and a memorial to the deceased farmer. He handed over the family members of the slain farmers documents relating to the compensation amount transferred to their accounts online.
The chief minister is also slated to visit Barkheda Panth, Budha and Chillod Piplia villages to meet the kin of three other farmers killed in police action to quell the unrest. On June 6, five farmers were killed as the agitation by peasants demanding a loan waiver and remunerative prices for their produce turned violent in Mandsaur.
Besides, a 26-year-old farmer had died in Badwan village, also in Mandsaur, allegedly after being beaten up by police.
Meanwhile, Scindia, Congress chief whip in the Lok Sabha, began a 72-hour Satyagraha at T T Nagar's Dussehra Maidan in Bhopal on Wednesday afternoon. The scion of the erstwhile royal family of Gwalior, garlanded the portrait of Mahatma Gandhi on stage before sitting on 'satyagraha'. Pictures of six farmers - five of them killed in police firing -- were also put up on the stage.
Scindia and his supporters were on Tuesday detained in Ratlam while on way to Mandsaur, amid dramatic scenes. He had accused the state's BJP government of being dictatorial and vowed to fight for the cause of the farmers.