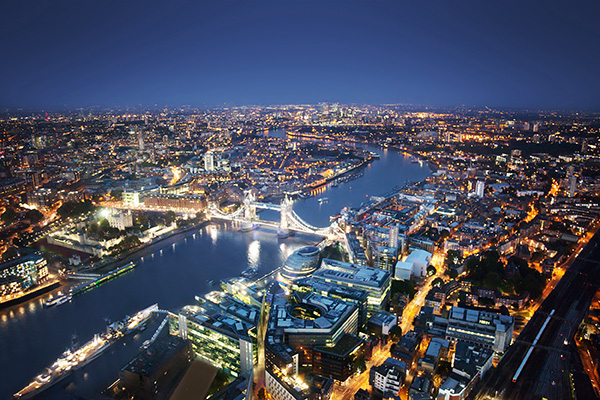 Have you ever dreamed of swimming through the clouds? Gracefully gliding through the sky above a world in miniature below? While skydivers may get a fleeting glance of how that might feel, for most of us that experience will remain a fantasy. However, now we mere mortals can get closer to the dream by checking in to a luxury hotel that reaches for the stars in one of the greatest cities on earth. The Sky Pool, a 34ft infinity pool some 600ft up in the air, is just one of the striking features of the Shangri-La at The Shard, one of London’s newest and most impressive icons.

No parachute is required to float above St Paul’s Cathedral, the Thames and the Tower of London, instead a pair of trunks and a room key is all you need to splash high above the capital of the UK. It’s a heady experience; submerged in warm 24C water time seems to stand still as you soak up what must be one of the best city views in the world. And that view is everywhere in this stunning hotel, take a shower or a bath in your room and you are staring out at the Houses of Parliament and Big Ben in the distance, go for a drink in the GŎNG bar on the 52nd floor and you are looking down on Tower Bridge, or sit down for a sumptuous breakfast in its TING restaurant and eat up famous buildings such as The Gherkin.

You’ll spend so much time looking out that you might be forgiven for not looking around, which would be a shame as Shangri-La have done an incredible job turning floors 34 to 52 of Renzo Piano’s The Shard into a five-star hotel to be remembered. It doesn’t matter really which of the 200 plus rooms you check in to as all have that stunning vista as standard, but there is more to your accommodation than simply the floor to ceiling windows.

Well sort of, everything is geared to squeeze every last drop of value from that wondrous view, including the beautiful marble bathroom. Of course you’ll barely notice it as you are lying in your free-standing bath staring out at London, or refreshing yourself in the monsoon shower which features all glass partition so as not to obscure your line of site on say the London Eye. You’ll perhaps not notice the rest of your room, the fine décor, the luxurious bed, the marble writing desk, because you’ll focus on one thing, the pair of binoculars that comes as standard in each room with a viewing guide, there’s an enjoyable hour right there. I suppose a word or two should also go for the various dining and drinking options you can access — even though you won’t really glance down at your plate.

The Shangri-La at The Shard’s signature restaurant is the elegant but relaxed TING. While its menu of course features Asian cuisine this is also where you can tear into a mean full English breakfast or a classic afternoon tea (while keeping the Thames fully in view). Meanwhile at the top floor of the hotel, as previously mentioned, you’ll find GŎNG one of the highest, and coolest, watering holes in Europe. Here beverages get their own spin, in fact some actually spin, served in glasses that levitate above the table.

Eventually though you’ll want to wander outside and look at London at ground level, if only to glance back and see The Shard from the outside. Just outside the ‘Square Mile’, the Shangri-La at The Shard is ideally located for those in the mood for an exhilarating river walk into the City of London.

The famed London Bridge is just minutes away as is the vibrant Borough Market which has become a hotspot for street food and nightlife. Of course Borough Market tragically has been in the news after the recent terror attack, but this area, and London as a whole, will only return more determined to enjoy life. The people that frequent the market, and those who work in it, will bounce back as their way of honouring those who died and as such is a place that deserves a traveller’s support.

Those seeking that stunning riverside stroll shouldn’t cross Tower Bridge but instead plough through Borough Market and emerge next to the Thames, right next to the Golden Hinde II, a full-size reconstruction of the ship 16th century explorer Sir Frances Drake circumnavigated the globe in. Then you simply follow the river in towards the City, going past Shakespeare’s Globe Theatre, the Tate Modern Gallery, the OXO building, the London Television Centre, the National Theatre and the London Eye, arriving at Westminster Bridge if you want to take in the Houses of Parliament.

On a crisp sunny day this walk will stir your soul, the overwhelming display of architecture and beauty, combined with people of all colours and creeds enjoying the scenery, is a fraction of what makes London so astonishing a city.

Should you wish to leave the riverside a little earlier than Westminster Bridge, then take Waterloo Bridge and head into fashionable Covent Garden, or the Hungerford Bridge and Golden Jubilee Bridge to head towards Trafalgar Square. Of course no single travel review can encapsulate London, entire guidebooks struggle to do so, but a walk through one of the capital’s Royal Parks offers a different side to the bustling metropolis, a place to slow down and breathe in the fresh air.

Should you happen to stroll through the beautifully leafy Kensington Gardens then you’ll also be a stone’s throw from one of London’s great little secret dining venues, the Roof Gardens.
Just off Kensington High Street this unique venue offers visitors three different landscaped gardens at the top of what was once a department store. It features the excellent Babylon restaurant that serves up fantastic food and views from its seventh floor location. But the main thing you’ll remember are the flamingos which gracefully wander around the gardens.
After all that walking you may be ready for bed, but at the Shangri-La at The Shard you will want to stay up for just a little longer. At night your room provides the viewing platform to gaze out at the sea of lights that is London after sunset.
—[email protected]