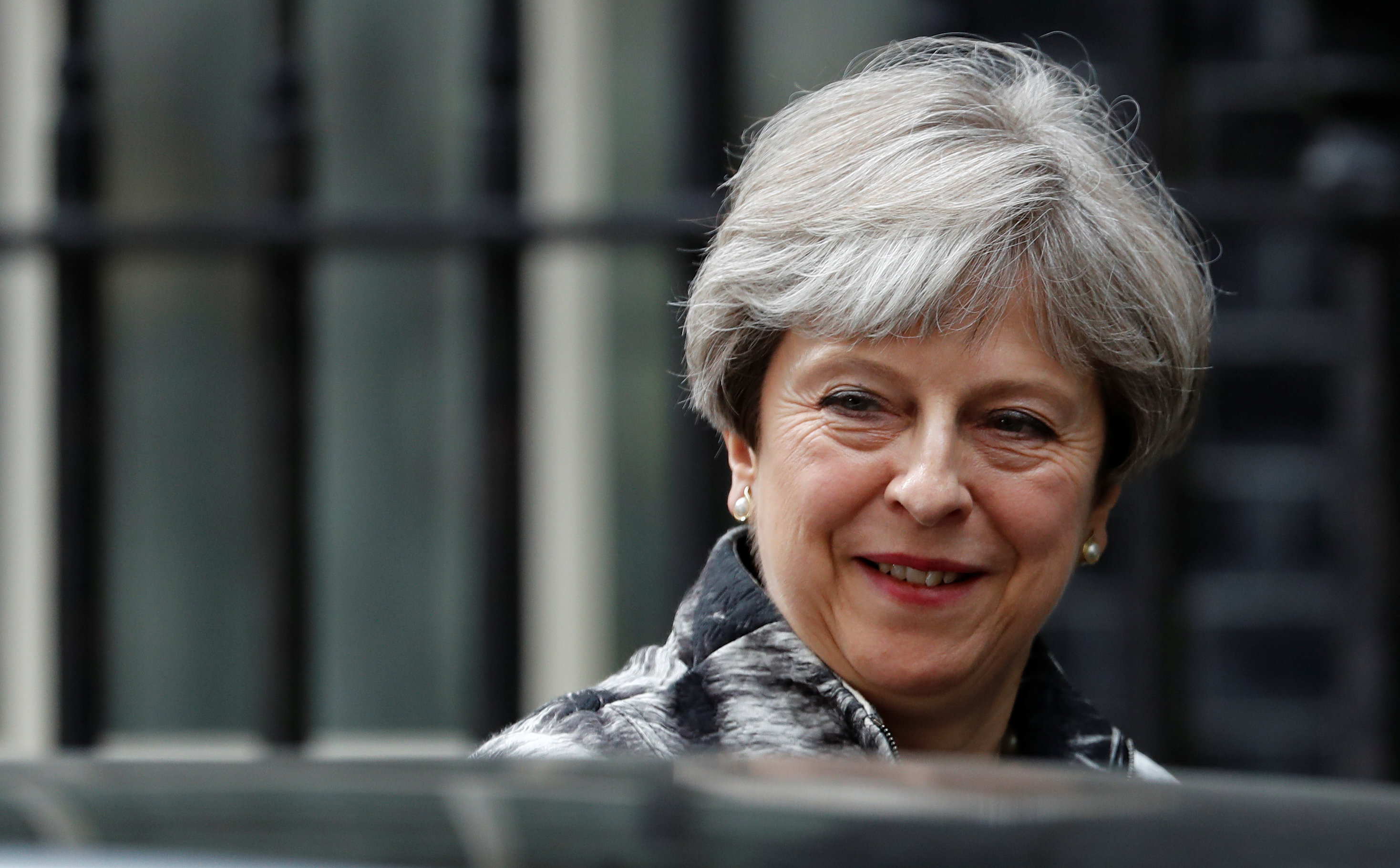 London: British Prime Minister Theresa May neared a deal with a Northern Irish Protestant party to save her premiership on Tuesday but faced a tug of war over her Brexit strategy just days before embarking on formal divorce talks with the European Union.
After losing her parliamentary Majority in a botched gamble on a snap election, May is so weakened that her Brexit strategy has become the subject of public debate inside her own party with calls for her to take a more business-friendly approach.
Seeking to avoid a second election that could deepen Britain's worst political turmoil since last June's shock vote to leave the EU, May edged closer to a deal to get support of the Democratic Unionist Party (DUP).
She met DUP leader Arlene Foster, whose eurosceptic Northern Irish party has 10 parliamentary seats, for over one hour of talks in Downing Street. May and Foster later left through different exits.
"Discussions are going well with the government," Foster said. "We hope soon to be able to bring this work to a successful conclusion."
A senior Conservative Party source agreed.
"They are ongoing, it hasn't broken up for the day. I'm not putting any timescale on when it will be done," the source, who spoke on condition of anonymity, told Reuters.
A Downing Street spokesman declined to comment.
But a deal with the DUP risks destabilising Northern Ireland by increasing the influence of pro-British unionists. They have struggled for years with Irish Catholic nationalists, who want the British province to join a united Ireland.
Former prime minister John Major said he was concerned May's plan to govern with the support of the DUP could pitch the province back into turmoil by persuading 'hard men' on both sides of the divide to return to violence.
"The last thing anybody wishes to see is one or other of the communities so aggrieved that the hard men, who are still there lurking in the corners of the communities, decide that they wish to return to some form of violence," Major told BBC radio.
"I am concerned about the deal. I am wary about it. I am dubious about it," Major said.
While the DUP are deeply eurosceptic, they have balked at some of the practical implications of a so-called hard Brexit -- including a potential loss of a "frictionless border" with the Republic of Ireland -- and talks will touch on efforts to minimise the potential damage to Northern Ireland.
With formal EU divorce talks due next week, May heads to France on Tuesday to meet Emmanuel Macron, who last month swept to victory in its presidential election.
During the campaign, May cast herself as the only leader competent enough to navigate the tortuous Brexit negotiations that will shape the future of the United Kingdom and its $2.5 trillion economy.
Jeremy Corbyn, leader of the opposition Labour Party, which saw its number of parliamentary seats and share of the vote increase, said there could be another election this year or early in 2018 after Thursday's vote produced no clear winner.
May, who ahead of the June referendum supported remaining in the EU, has promised to start the Brexit talks next week but opponents of a sharp break with the EU took her woes as a chance to push back against her strategy.
Before the election, May proposed a clean break from the EU, involving withdrawal from Europe's single market, limits on immigration and a bespoke customs deal with the EU.
Brexit minister David Davis has insisted the approach to the EU divorce has not changed, but at the meeting with lawmakers on Monday, May recognised that a broader consensus needed to be built for Brexit and made clear she would listen to all wings of the party on the issue.
Less than a week before Brexit talks are due to begin, May faces conflicting demands within her own party and even a proposal for business groups and lawmakers from all parties to agree a national position for Britain's most complex negotiations since World War Two.
May faces a difficult balancing act: Divisions over Europe helped sink the premierships of Margaret Thatcher, John Major and David Cameron, and many of her lawmakers and party membership support a sharp break with the EU.
"The Tory civil war on the EU which has ripped it apart since the Maastricht rebellions of the early 1990s, and which the referendum was supposed to solve, is now raging again," said Chris Grey, an academic who specialises in Brexit at Royal Holloway college in London.
Scottish Conservative leader Ruth Davidson said the government should put economic growth at the heart of its Brexit strategy, comments placing her in the camp of those advocating a closer trade relationship with the EU, or "soft" Brexit.
May appointed Steve Baker, a prominent Brexit campaigner, to the Department for Exiting the EU.
"We need a good, clean exit which minimises disruption and maximises opportunity," Baker said just hours before his appointment.
The performance of the British economy, could also influence perceptions of Brexit: Government bond prices were on track for their heaviest one-day losses since January after consumer price inflation jumped to 2.9 per cent in May.
As European leaders tried to fathom exactly how Britain would begin the negotiations, German Finance Minister Wolfgang Schaeuble said he wanted a Brexit deal that would limit negative consequences for the bloc but nor did it want to weaken Britain.
"We want a solution that causes as little damage as possible for both sides," Schaeuble said, adding that he expected London to remain an important financial centre for Europe.
The veteran conservative predicted that Britain would regret its departure from the bloc at some point in the future.
"And then they'll come back. But it remains another question if I'll still witness this," Schaeuble, 74, said.