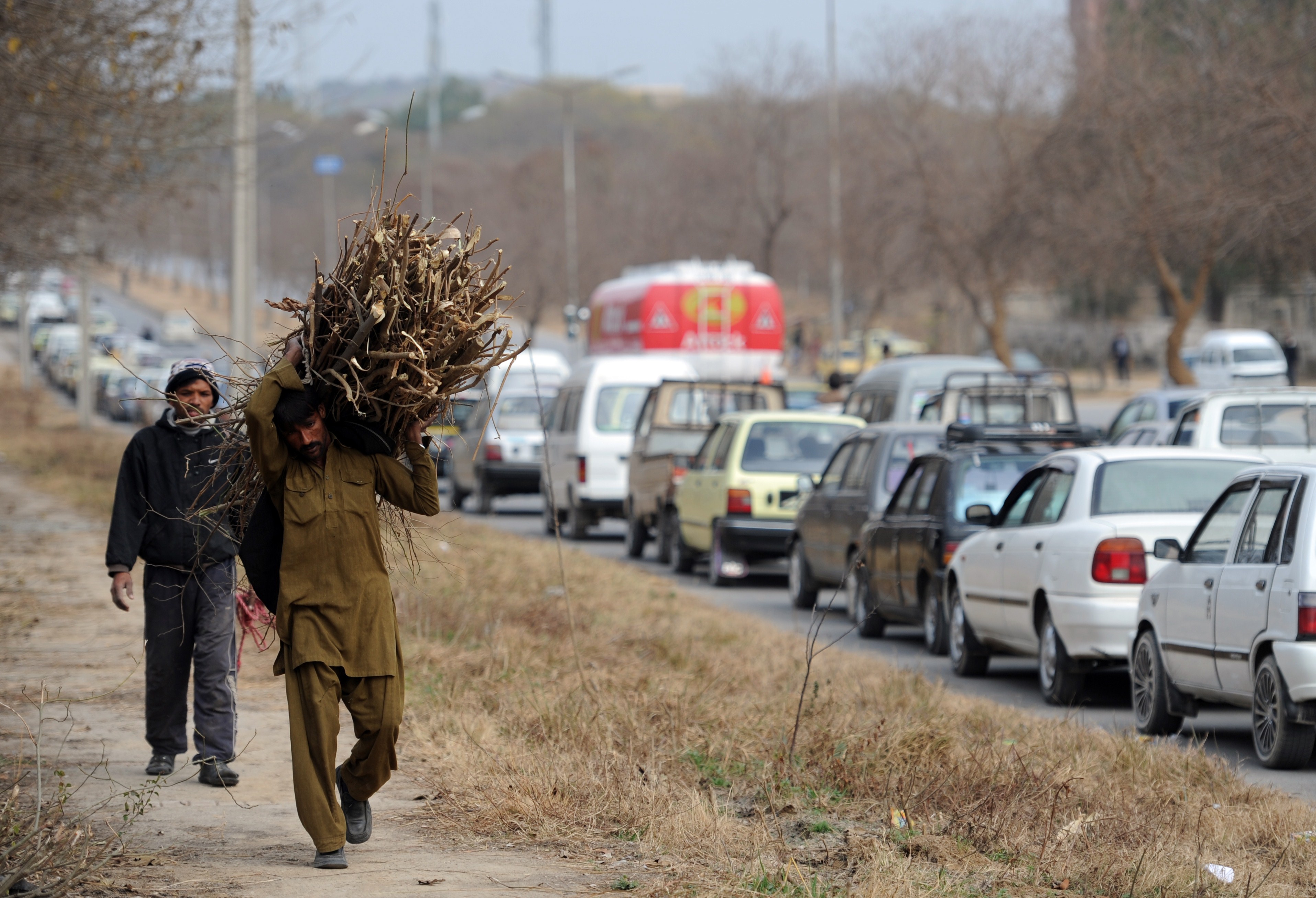 Islamabad: Each winter, a familiar sight crops up in Islamabad and the nearby bustling city of Rawalpindi: People queuing outside firewood shops, waiting their turn to fill bags or plastic baskets with wood to burn when their household gas supply is disrupted.
Gas shortages are increasingly hitting households during the chilly winter months, often when people are trying to prepare dinner or need to heat their homes in the evenings.
"What else can one do other than burning fuelwood, when one does not get gas supplied at his home?” grumbled Muhammad Razzaq, a 50-year-old government employee, as he recently collected a load of firewood.
Last winter, he said, he needed to buy firewood for cooking and heating water for bathing and dishwashing when no gas was available at his rented home on the outskirts of Islamabad.
Summer temperatures have now reduced the need for heating, but environmentalists worry that worsening gas shortages are fueling a new surge of deforestation in the country - and could derail ambitious efforts to plant trees and reverse the country’s large-scale forest losses.
"We and our environment will be completely deprived of the environmental and health gains of these afforestation programmes by 2030," said Riffat Naseem Malik of the Department of Forestry and Wildlife Management at the University of Haripur in Khyber-Pakhtunkhwa province, which is working to replant a billion new trees "People will be chopping down these trees even more rapidly to meet their domestic energy needs as long as the government fails to stave off the huge gas supply shortfall,” he said.
Gas consumption in Pakistan has grown by more than 80 per cent over the last 20 years.
As the country’s population grows rapidly, the number of domestic gas connections has more than doubled, from around 4 million to 8.4 million, according to the Pakistan Economic Survey 2016-17.
Although the government reports that just under 30 per cent of households have access to gas, the state-owned Oil and Gas Regulatory Authority estimates domestic gas demand to be 5.8 billion cubic feet per day, compared to production of around 4.1 billion cubic feet - a shortfall of 1.7 billion cubic feet.
The authority warned in April this year that by 2030 the gap will rise to as much as 3.9 billion cubic feet per day.
The country is unable to meet demand in part because of inadequate investment in gas exploration in Pakistan, due in part to the country’s poor security situation.
But experts point to other factors behind the gas shortfall as well, including inadequate maintenance of existing gas pipeline networks, the diversion of large quantities of gas from supplying households to fuelling power plants in order to cut oil import expenses, and a steep rise in the conversion of vehicles to compressed natural gas as a cheap fuel source.
Mukhtar Ahmed, a former energy adviser to the prime minister, estimates that by 2030 Pakistan’s overall demand for energy will increase 350 per cent, while the proportion of the country’s total energy needs met from domestic sources will fall from 72 per cent to 38 per cent.
The gas shortfall has alarmed forest and environment experts in a country where 27,000 hectares (67,000 acres) of forest are chopped down each year, according to the government’s National Forest Policy, published in 2015.
A report by the United Nation’s Food and Agriculture Organisation says that deforestation has averaged 42,000 hectares annually since 1990, reducing the country’s forested area by more than 40 per cent between 1990 and 2015. Forests now cover less than 2 per cent of Pakistan’s land area, one of the lowest levels in the region, the report said.
Conservationists fear worsening gas shortages could reverse recent forest gains from projects such as the ambitious Billion Tree Tsunami project in the northwest province of Khyber-Pakhtunkhwa, and the prime minister’s Green Pakistan Programme, which aims to plant 100 million trees nationally over a five-year period.
The architect of Khyber-Pakhtunkhwa project, Malik Amin Aslam, said that the provincial government is working on plans to reduce people’s reliance on fuel wood.
The province is supporting the installation of more than 350 community-based micro-hydropower projects, at a cost of 5 billion Pakistani rupees ($48 million), to electrify millions of off-grid rural households, he said.
The small hydropower plants will generate 35 megawatts of electricity, he said.
"The project is already 70 per cent completed and, in fact, the ambition has recently been expanded to take it to 1,000 micro-hydro units by 2018. As these remote locations are close to or in the middle of pristine natural forests, this provides a carbon-free alternative to cutting trees,” Amin Aslam said.
Solar energy projects similarly are being put in place to reduce the need for fuel wood, he said, including a plan to provide solar cooking stoves and water heaters in the forest areas around Chitral district.
The aim, he said, is that "the trees being planted today in the province will remain intact, as by the time they grow fully mature people will have solar-powered and electricity-run efficient domestic stoves in their kitchens and rooms for cooking and health as well as solar and electric geysers in their bathrooms for bathing in winter”.
With domestic oil and gas supplies forecast to be exhausted by 2025 and 2030 respectively, according a report by the

U.S.-based National Bureau of Asian Research, the Pakistani government has also expedited efforts to import gas.
The federal minister for petroleum and natural resources, Shahid Khaqan Abbasi, said work had begun to fast-track gas import projects, including the Iran-Pakistan pipeline, Turkmenistan-Afghanistan-Pakistan-India pipeline and the import of liquefied natural gas (LNG).
In February the government signed a 15-year agreement with Qatar to import up to 3.75 million tonnes of liquefied natural gas a year.
"Pakistan is well on track to have 1.5 billion cubic feet per day of LNG in the system by end of 2017, which will halve the country’s current total gas shortfall,” Abbasi said in an interview.