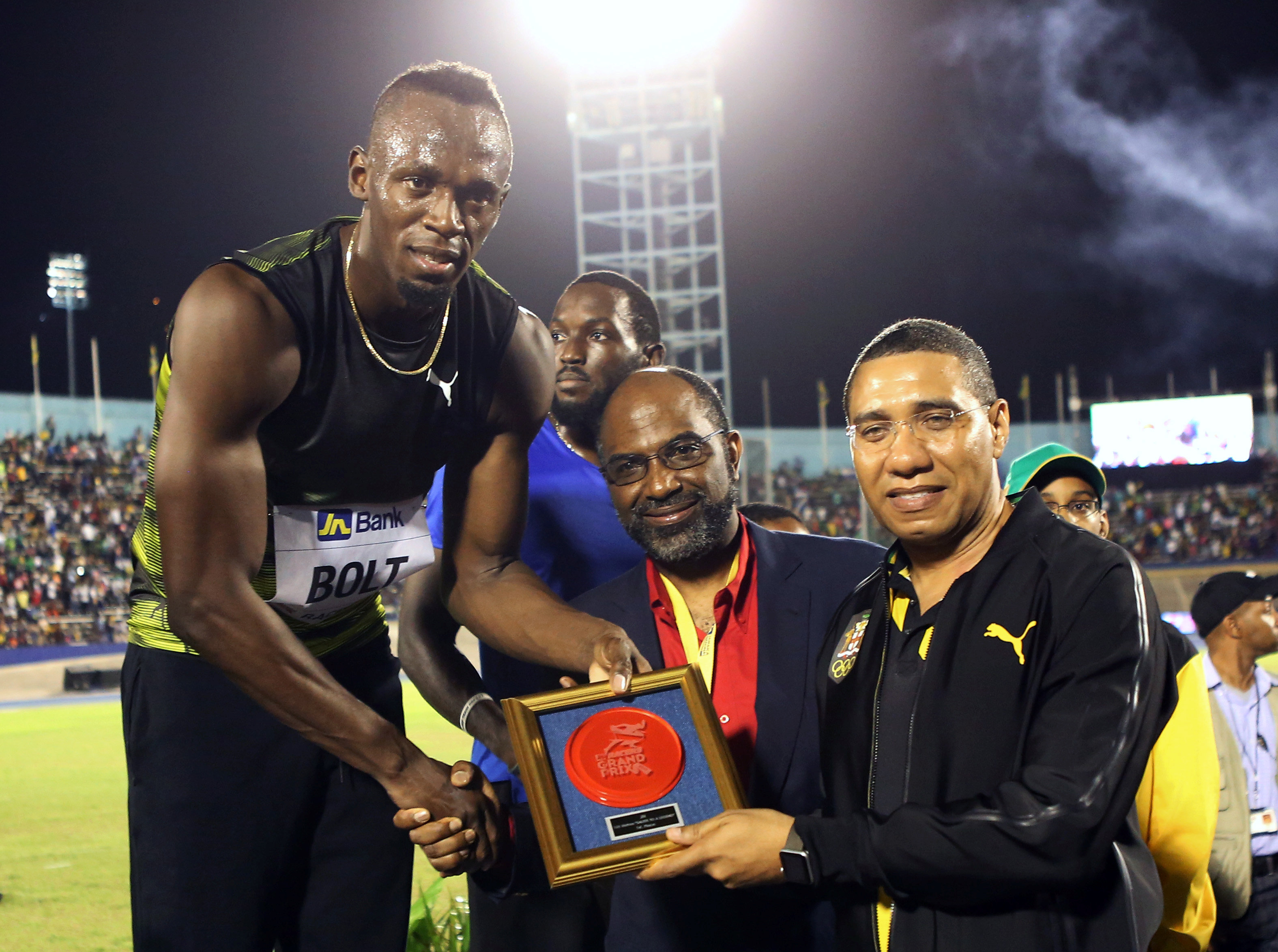 Kingston: An emotional Usain Bolt recovered from a moderate start to win his final 100 metres sprint on home soil, clocking 10.03 seconds at the 2nd Racers Grand Prix in Kingston on Saturday.
The multiple Olympic and world gold medallist, who will retire after August's world championships in London, confessed to being a nervous wreck before running his last race on Jamaican soil.
"The run, it was just ok. I must say it was ok. I don't think I've ever been that nervous running a 100m," Bolt said after a lap of honor before a packed stadium, including International Association of Athletics Federations President Sebastian Coe and the top brass of Jamaican politics including Prime Minister Andrew Holness.
"I think that was possibly one of my worst race. My execution was poor, my start was poor as always. I think in the last bit I lost it a little.
"But I didn't expect anything spectacular... my first race since January when I ran a 150m and some relays in Australia so I just wanted to stay injury free, put on a show for the crowd and shown them I'm thankful for the support over the years.
"Just the atmosphere and the people, the support they came out and give me tonight, it was really nerve racking. I never expected this, I knew it was going to be Big, the stadium was ram packed so thank you guys for coming out and supporting me."
Running from lane five, Bolt took control of the race before the halfway mark and pulled away to the delight of more than 30,000 spectators.
"It's Big to see everybody that turned out. It shows that what I've done for the sport is a big deal to them and they really appreciate it," said the 30-year-old.
"So thank you and it was my honour to put the sport of track and field at the top and to continue to dominate. I'll try my best even when I've hung up my spikes, to really continue to push track and field in anyway possible."
The double sprint world record holder, who has amassed eight Olympic golds and 13 world championship medals, will make his final bow in August in the British capital, where he will only run the shorter sprint despite having a wildcard for the 200m.
"It will definitely just be the 100. I know a lot of people really want to see me run it (200m) but the 100m will be the one cause I know people really want to see that also," Bolt said.
"I'm just going there to do my best and to come through victorious as always."
Meanwhile, South African 400m world record holder Wayde Van Niekerk ran a blistering curve on his way to posting a world leading 19.84 seconds (wind 1.2 m/s) to win the 200m sprint.
"This is a positive step forward, but I know there's still quite of bit of work to be done," Van Niekerk said.
David Rudisha, the reigning Olympic and world championship winner in 800m, posted a season-best one minute 44.90 seconds but was caught and passed by his little known fellow Kenyan Willy Tarbei, who won in one minute 44.86 seconds.
British multiple Olympic and world championship gold medallist Mo Farah clocked seven minutes 41.20 seconds to land the 3,000 ahead of Australian Patrick Tierman and Jamaica's Kemoy Campbell.