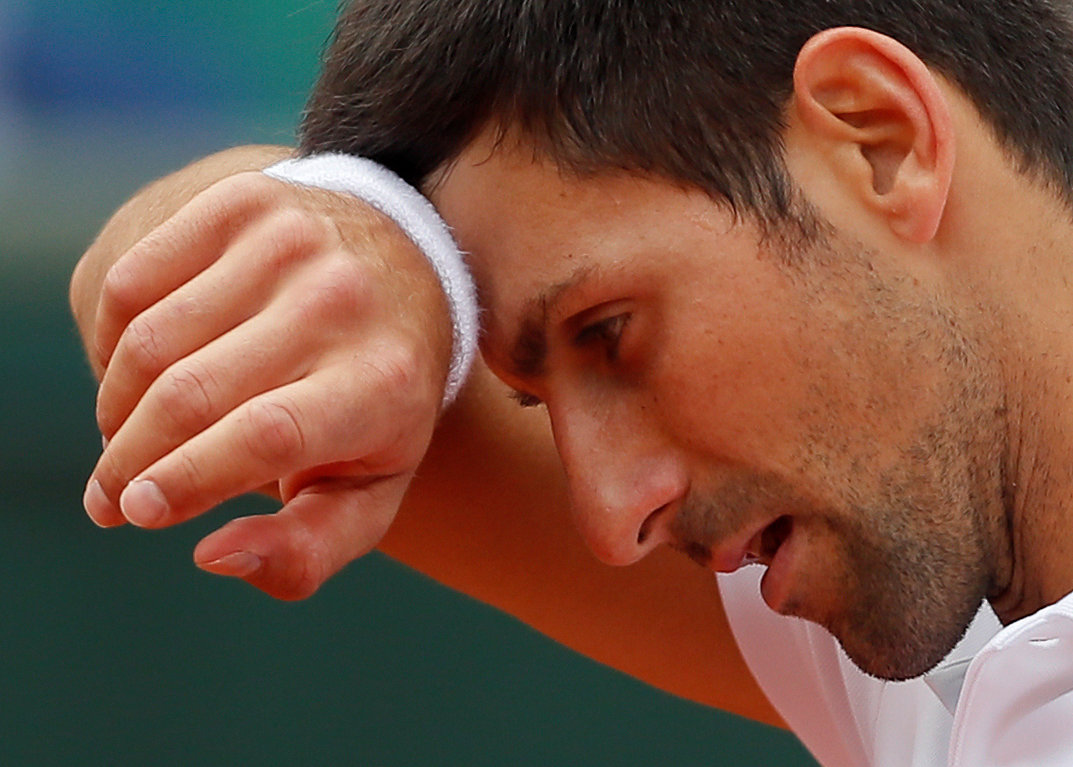 Paris: When the time comes, proud champions are supposed to relinquish their crowns after fighting and snarling to the last moment. Novak Djokovic effectively waved the white flag, bowing out of the French Open with a whimper on Wednesday.
The 30-year-old Serb, who has prevailed in some of the sport's epic battles on the way to 12 major titles, was barely recognisable as he capitulated in a 7-6 (5), 6-3, 6-0 defeat by Austrian Dominic Thiem in the quarterfinals.
After squandering two set points in the opener on a blustery Court Suzanne Lenglen, Djokovic's renowned fighting spirit ebbed away quickly and he surrendered the third set in 20 minutes.
The result was all the more remarkable as in five previous matches with the 23-year-old he had lost one set and last month thrashed him 6-1, 6-0 in Rome -- a result that suggested Djokovic had found his mojo, missing since he won the French a year ago.
Sixth seed Thiem, who to be fair played superbly in the first set but must have thought he was facing a Djokovic impersonator thereafter, is yet to drop a set at this year's tournament but his next task is a daunting one.
"It doesn't get any easier," Thiem, beaten by Djokovic in last year's semi-final, said on court when asked to comment on the prospect of facing favourite Rafa Nadal in the semis.
While Thiem's part in Djokovic's downfall should not be overlooked, it was the Serbian world number two's astonishing collapse that was the talk of Roland Garros.
Double French Open champion Jim Courier, commentating on the match, said the Serb had shown 'no fight'.
Listless Djokovic
That was certainly true after the first set as Djokovic, whose new coach Andre Agassi had already flown home, appeared lost and listless, misfiring a succession of lame backhands.
"Obviously nothing was going my way and everything his way. Just pretty bad set," said Djokovic, who split with his long-term coaching crew last month and announced shortly before the French he would be working with eight-time major winner Agassi.
"It was decided I think in the first set today. I tried. I lost that crucial break in the beginning of the second, and he started serving better, backing it up with the first shot. He deserved to win. He was definitely the better player."
It was Djokovic's first defeat before the semifinals in Paris since 2010 when he was also beaten by an Austrian, Juergen Melzer in the quarterfinals.
The danger signs were already there in the early stages when Thiem broke the Djokovic serve in the third game. However, Djokovic responded to break back twice in a row, only to drop his own serve at 4-2 with a forehand error.
Djokovic piled on the pressure when Thiem served at 4-5 and he had his man in trouble at 15-40. Thiem saved the first set point with a volley, then forced a backhand error on the second.
The tiebreak was nip and tuck with a succession of points against the serve but Thiem took it when Djokovic shovelled a tight-looking backhand into the net.
Djokovic dropped serve at the start of the second set and the expected backlash never materialised as Thiem marched towards the last four with unexpected ease.
Djokovic raised his fist to the crowd after winning a point early in the third but it was a hollow gesture.
He did save one match point but was already walking towards the net to shake hands when Thiem sent a backhand fizzing past him a few seconds later.
Thiem, who has 22 wins in claycourt matches this year and reached finals in Barcelona and Madrid where he lost to Nadal, is the second Austrian man to reach multiple Grand Slam semifinals after former French Open champion Thomas Muster.