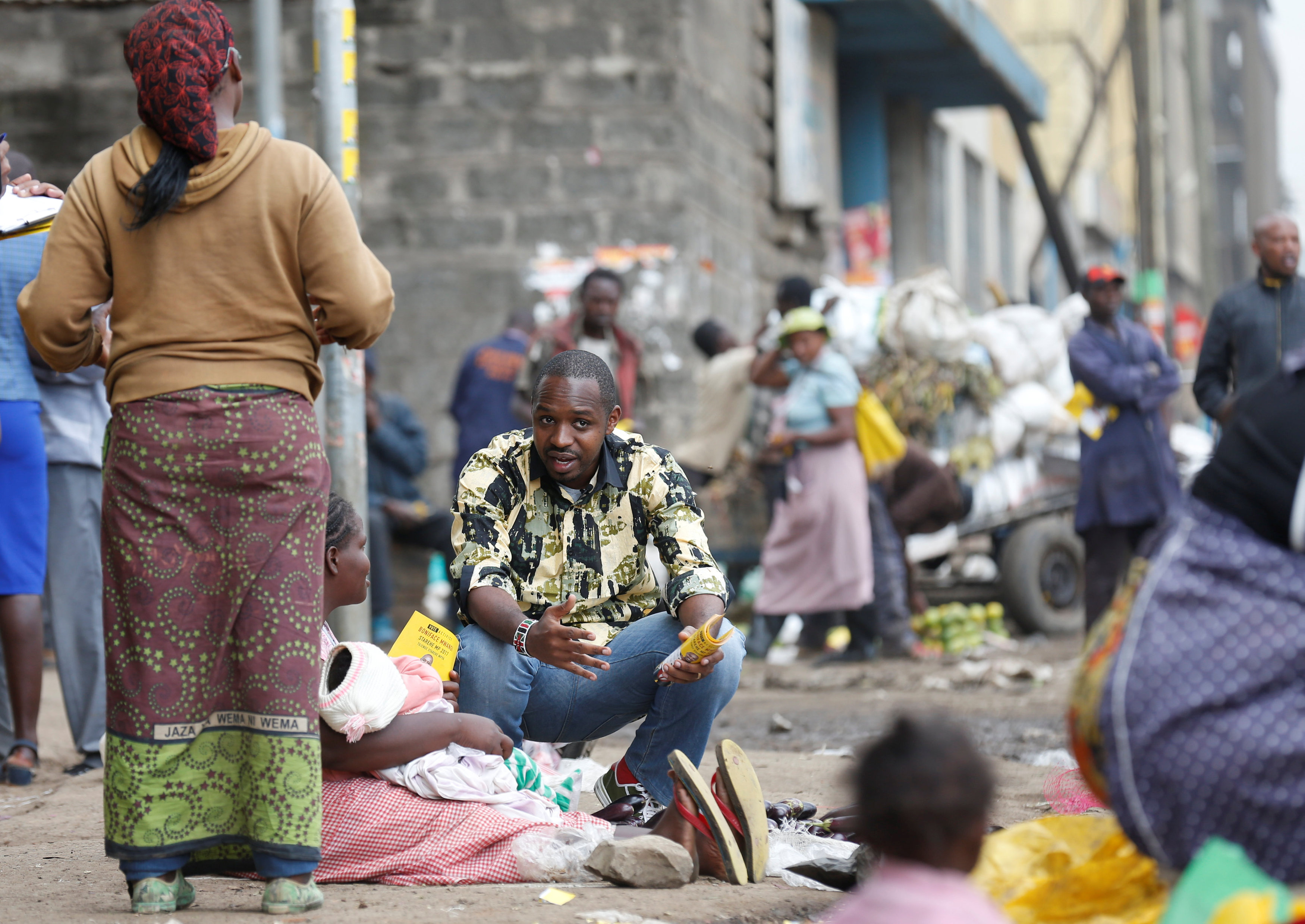 Nairobi: Kenya's most flamboyant anti-corruption activist, Boniface Mwangi spent years enraging politicians with headline-grabbing stunts, once herding blood-drenched animals to parliament to highlight legislators' sky-high salaries.
Now he's running for office.
Mwangi, the fiery 33-year-old son of a street hawker, promises to force change from within if he wins a parliamentary seat in the August 8 elections, when Kenyans choose a president, parliamentarians and local representatives.
Winning the seat he seeks in a Nairobi district could be tricky. Kenyans are used to politicians showing up in convoys of luxury cars around elections, handing out small banknotes while asking for votes, a practice that is illegal but ubiquitous. Instead of cash, Mwangi offers flyers and handshakes.
"Will you sell yourself for 500 shillings ($5) for five years?" he asked one group of men.
One of them, Joseph Outo, held up a flyer and shouted back to laughter from the crowd: "What can I do with this? Where's the T-shirts? Where's the money?"
But win or lose, his candidacy is attracting an unusual degree of national attention, contributing to public anger over scandals rocking President Uhuru Kenyatta's government.
"In Kenya, we have vampire leaders, they suck our blood every day," Mwangi told Reuters in a brief pause during campaigning. "I’m tired of not being listened to, I’m tired of our thieving politicians... I’m running to become the voice of the people inside parliament."
Mwangi, who formed his own small Ukweli party, is not supporting any presidential candidate: neither Kenyatta, seeking a second five-year term, nor his chief rival, veteran opposition leader Raila Odinga, who ran in the last two elections.
Mwangi says his views were forged during post-election violence a decade ago, when more than 1,200 people were killed following a disputed vote.
A young news photographer then, he took pictures of lynchings, severed limbs, a church full of families burned alive. When the violence stopped, Mwangi and others launched a travelling photo exhibition to remind citizens of the suffering politics can cause.
The violence is brutal because the stakes are so high, Mwangi said. Kenyan politicians have some of the world's highest salaries - parliamentarians earn more than $10,000 per month with perks - and they often steal more. The average monthly salary in Kenya is $108.
"Violence comes from politicians, not the people," the father-of-three told Reuters as he campaigned outside Nairobi's sprawling Marakiti market, where women breastfed babies above overflowing gutters and a hawker demonstrated glue traps using live rats.
Since the riots, Mwangi helped organise a graffiti campaign depicting politicians as vultures, marched into clouds of teargas alongside primary school children protesting against illegal construction on their playground, and burned coffins outside parliament to protest against retired politicians getting taxpayer-funded funerals.
Mwangi has publicly declared his assets and his taxes and challenged his rivals to do the same. If elected he'll take a 50 per cent pay cut and refuse the car loan, bodyguard and medical allowance that come with the job, he says.
The president acknowledges his government has been slow to tackle graft, telling journalists in October: "Corruption is frustrating me... but my hands are tied". As Kenya's economy and government have grown, so have the opportunities to steal.
The country's budget has nearly tripled over the last five years, and "the level of corruption has been rising alongside the same," said Halakhe Waqo, the head of the Ethics and Anti-Corruption Commission, which investigates corrupt officials and recommends prosecutions.
The number of prosecutions has shot up from 138 five years ago to around 1,000 now, he said. The conviction rates is also slowly increasing, although Kenyans want to see more senior officials in the dock.
Edward Ouko, the auditor-general tasked with looking after public accounts, told Reuters at least 18 of the 45 government ministries have accountability problems "which point to literally corruption". He estimates around a third of government payments are misappropriated.
In one notable recent scam, at least $15 million was paid out of government accounts after someone created fake companies and submitted invoices to the National Youth Service, Ouko said.
A woman who was caught after collecting the cash from a bank in sacks said she was the hairdresser of the then cabinet secretary, Anne Waiguru. Waiguru denies any involvement and called the allegations "a smear campaign". She is now running to be a county governor.
In another scandal, millions of dollars are alleged to have gone missing from the health ministry; USAID stopped giving to the ministry last month over corruption concerns.
Ouko, the auditor, is himself being investigated by Waqo's anti-corruption commission for buying computer software without going through the correct tendering process. He says only one company made the software he needed and he believes the case is politically motivated.
Many cases get bogged down the court system. Wealthy defendants "will always go to court and procure a court order to stop us from investigating," Waqo said.
Mwangi, who has been arrested around a dozen times during protests, puts it more simply.
"In Kenya, you are guilty until proven rich," he said with a wry smile. "Why would you hire a lawyer? You buy the judge."
Voters, used to grand promises, don't all trust him yet.
"I will vote for him. We see him (in newspapers) fighting for our rights," declared spinach seller Mary Njau.
"But what will stop him from changing after he is elected?" asked her customer Irene Njoki.