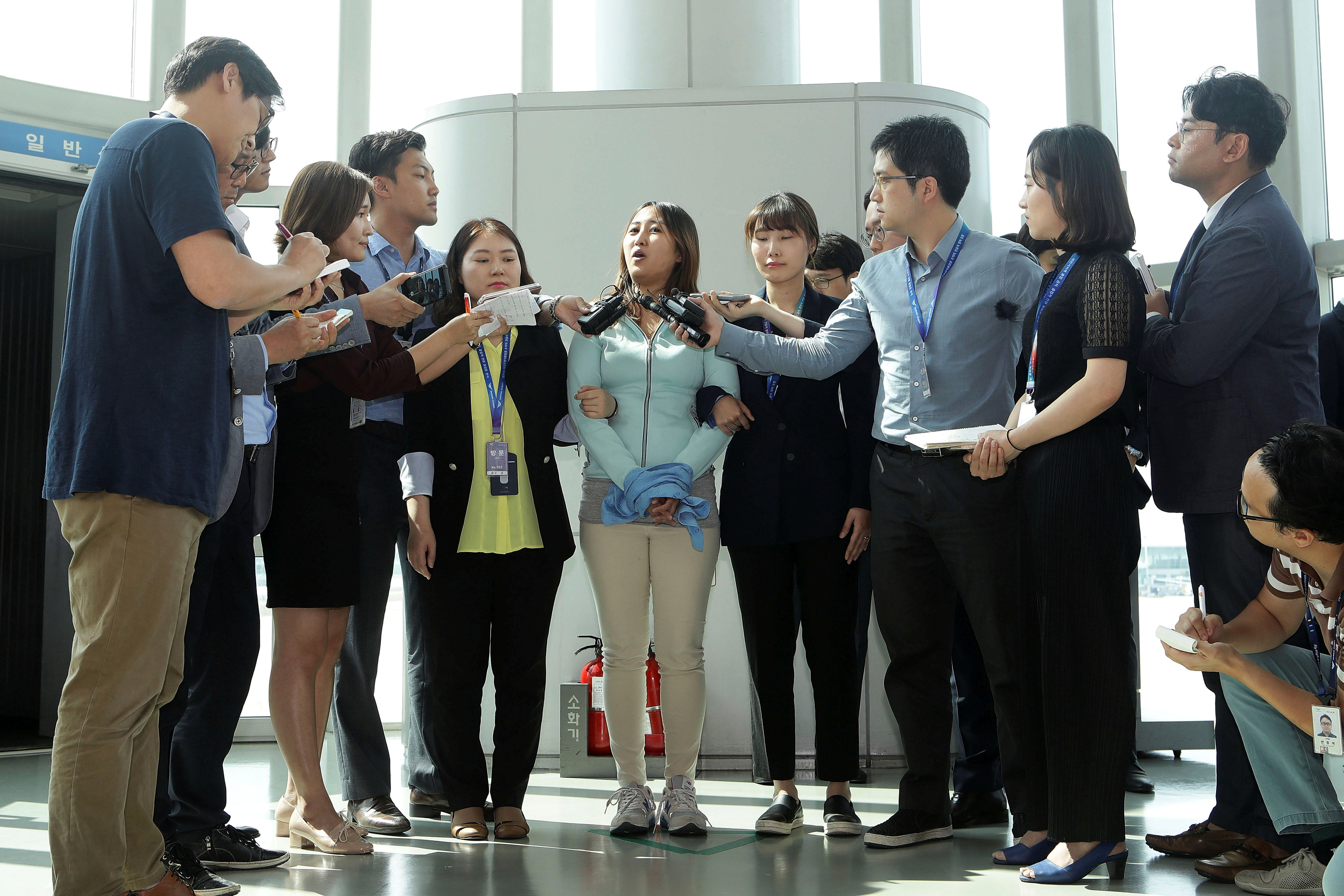 Seoul: The disgraced daughter of a key figure in a corruption scandal that led to the downfall of former South Korean President Park Geun-hye returned home from Denmark on Wednesday, saying she wanted to clear up misunderstandings.
Chung Yoo-ra, 20, who fled to Europe last year to avoid prosecution on charges linked to her mother, Choi Soon-sil, her academic record and her equestrian career, was taken by prosecutors for questioning as soon as she landed.
Chung, who was with her infant son when she was arrested by Danish authorities in January, unexpectedly dropped her appeal against extradition last week.
"As my baby son has not been able to spend time with the family, I thought it would be better for me to return to South Korea to sort out misunderstanding over the scandal," Chung told reporters.
Choi is being held in detention and is on trial for extortion, abuse of power and attempted fraud to extort millions of dollars from big companies, including Samsung Electronics in hand with impeached ex-leader Park, her long-time friend.
The three women have denied all wrongdoing.
South Korean authorities have also been investigating whether Samsung Electronics channelled money to a German firm controlled by Choi to sponsor Chung's equestrian career in return for favours from Choi and Park.
Chung said she did not know of her mother's relationship with Park and how that played in her career.
"I was not aware of the details of the Samsung Group's financial assistance for my equestrian training, although my mother had vaguely told me about it," said Chung.
Chung won a gold medal in group dressage at the 2014 Asian Games.
In return for the assistance, prosecutors have alleged Samsung Group chief Jay Y. Lee received political favours and government support for a merger of two Samsung affiliates in 2015, which helped Lee cement his control of the group after the hospitalisation of his father, former Samsung Group chief Lee Kun-hee.
Lee, held in detention and on a separate trial, has also denied wrongdoing.
Lee Kyung-jae, a lawyer for Choi who is likely to represent Chung, said of Choi: "As a mother, she is worried about the circumstances that her daughter will now face back in the country."
Chung faces charges that include criminal interference related to her academic record and acceptance into a competitive women's university with questionable qualifications.
Her entrance to the school and high school diploma were subsequently cancelled after authorities found Chung's high school attendance and test grades had been fabricated, sparking a public furore.
Prior to Chung's arrival on Wednesday, prosecutors asked the court to jail her mother for seven years for conspiring with school officials to forge her daughter's academic record.
Prosecutors are expected to seek a warrant to keep Chung in a holding cell as they can only detain her for 48 hours following Wednesday's arrest.