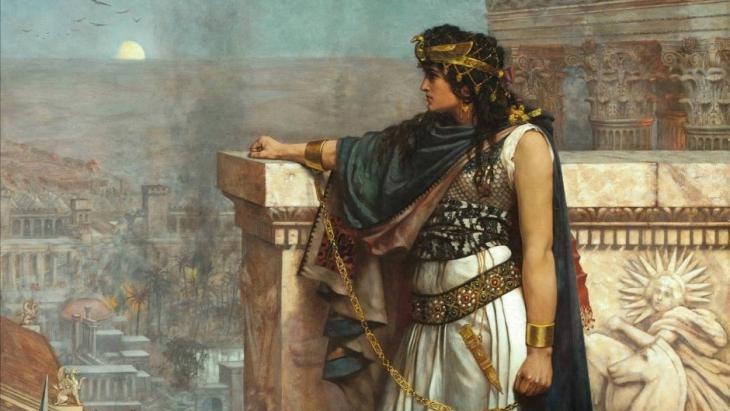 There is much that we can learn from those who shaped the landscape and culture of the Middle East to make it what it is today. Hi Weekly’s Heroes of Arabia series provides an insight into some of the legendary men (and women) who continue to act as inspiration for all of us to become better than we are, and still motivate us to do our best in the face of challenges and hardships. This issue, we take a look at Zenobia, the famed Empress of Palmyra who spearheaded a cultural and intellectual revolution across her kingdom.

Born
According to most historians, Zenobia was born around 240-241 AD, to Julius Septimus Zenobius, a military strategist in the army of Palmyra (modern day Syria). While her native Palmyrene name was Bat-Zabbai Septimia, hers was a name that when spelled out in Greek, the diplomatic language of Palmyra, became the more famed moniker we know today.

Early Years
Not being of common stock and low birth, Zenobia enjoyed an upbringing which was similar to that of a noblewoman. Ancient texts claim she enjoyed hunting for sport, and in addition to her native Palmyrene mother tongue, she was also instructed in Egyptian and Greek, and later learned to speak Latin.

At the age of 14, she became the second wife of King Odaeanathus, Lord of Palmyra, which at that time, was subservient to the Roman Empire, and part of the Roman province of Phoenice.
As Odaeanathus aided Rome throughout the Empire’s many wars on her Persian rivals, he grew in power and stature, being declared King of Kings and ruling all of Rome’s territories from the Black Sea to Palestine.

However, as Odaeanathus and his eldest son from his first wife, who’d been named his co-ruler and heir – were returning from a military campaign, they were both killed by assassins around 267 AD.

Conflicting accounts point to Zenobia’s hand in this plot, while others absolve her of any wrongdoing. Nevertheless, in the absence of an heir, Zenobia’s 10-year-old son, Vaballathus, was crowned emperor, with his mother acting as regent in his name.

Claim to Fame
Zenobia’s major achievement was wresting control of Palmyra back from the Roman Empire. As the Romans were battling the Goths and other Germanic tribes that inched ever closer to Rome, she fortified Palmyra’s eastern borders to ward off future Persian incursions, allowing her to dedicate all her resources to take on Rome’s famed iron-shod legions.

She always seemed to be one step ahead of one of the greatest empires in the world. In AD 270, while Roman Emperor Claudius had mounted a military expedition in Greece, requiring to muster garrisons from across Palmyra, Zenobia decided to strike while the iron was hot. She liberated the province of Arabia Petraea, before removing the regions of Judaea and Arabia from Roman rule.

By 270 AD, coins minted in Arabia stopped featuring the seals of Roman Emperors, and instead began issuing them in Vaballathus’ name.

Closer to home, Zenobia’s upbringing in a multi-ethnic and multi-religious culture saw Palmyra become a region of tolerance, where multiple religions could co-exist and thrive side by side.
She also turned her palace into a centre of education and learning: Many intellectuals, writers and scholars sought residence in Palmyra during her reign. Soon, it was her kingdom, and not Rome, Athens or Delphi, located in Greece, that those thirsty for knowledge flocked to.

One of the most famous scholars of her entourage was Longinus, a Greek philosopher and literary critic, who’d taught in Athens for 30 years, but eventually served Zenobia, first as a teacher and later as her chief advisor.

Zenobia maintained an administration that was tolerant towards all faiths and beliefs, and successfully governed a multicultural, multiethnic empire.

Unfortunately, her declaration of independence and secession from Rome brought the ire of the empire’s elite legions. Aware of the threat they carried, Zenobia galloped to the Persians on the fastest camel in Syria, on a quest for aid.

En route, though, she was captured by troops loyal to Roman Emperor Aurelian. She died soon afterwards, either on the way to Rome, or once she arrived in the Eternal City, with her death much publicised as a symbol of what Rome could do to those who rose up in revolt.

Legacy
Zenobia may have died under questionable circumstances, but her achievements leave little room for debate: At a time when male monarchs were the norm, she was a woman who not only successfully governed a vast swathe of land by example, but also oversaw a multicultural, secular nation where everyone’s beliefs were tolerated and upheld.

She was also a woman who displayed immense mental strength and presence of mind. She knew when to play the role of courteous diplomat and when to respond with a show of force, and was able to effortlessly switch between the two.

Today, she is revered as a national hero in Syria, and is rightly called The Queen of the Desert. — [email protected]