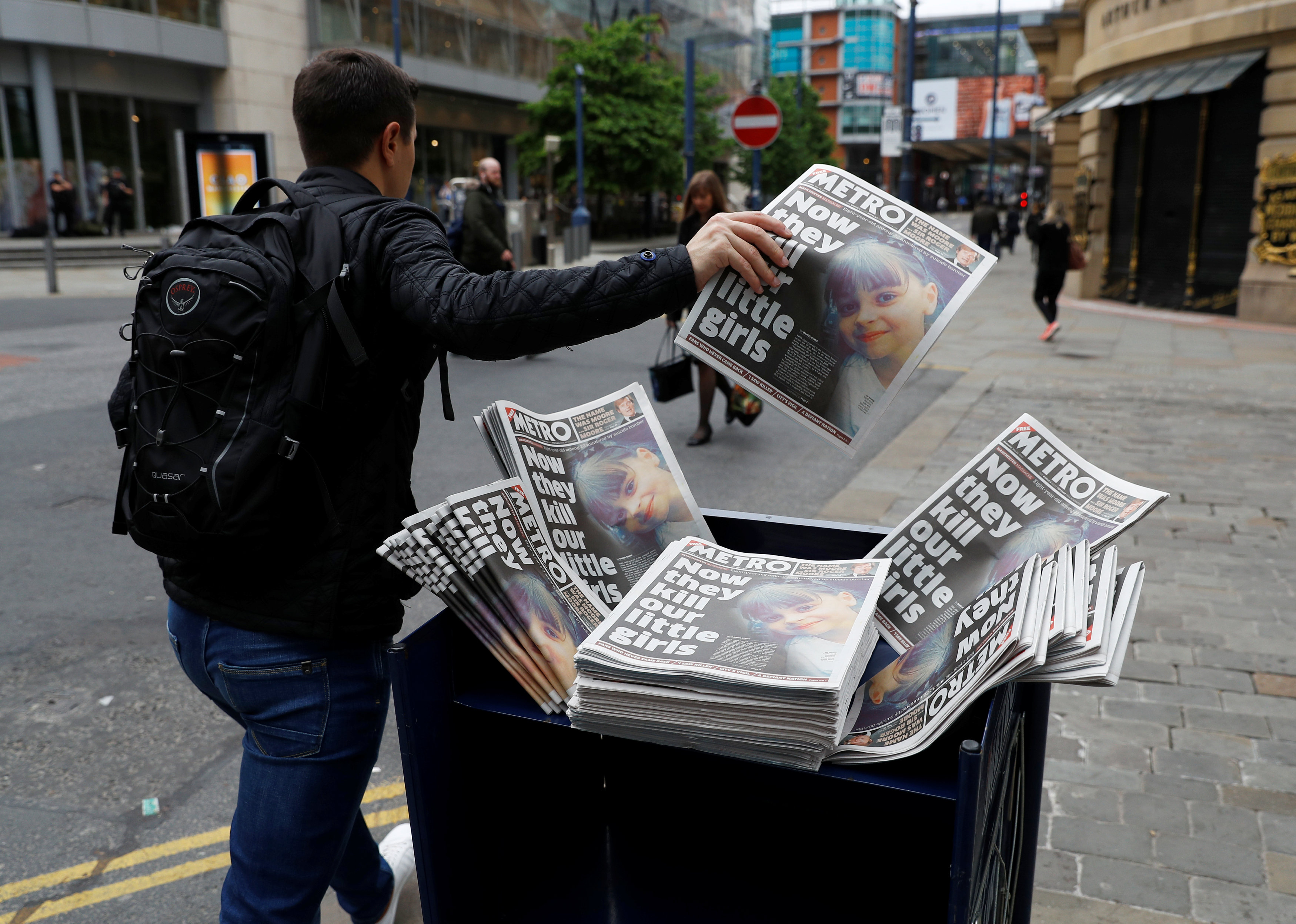 Manchester (England): The Manchester suicide bomber who killed 22 people at a pop concert venue packed with children likely did not act alone, a minister said on Wednesday as soldiers were being deployed to key sites to help prevent further attacks.
Meanwhile, three men have been arrested in Manchester on Wednesday in an investigation into the suicide bomb attack, police in the city said.
"Three police warrants were executed in south Manchester in connection to the ongoing investigation," a spokeswoman for Greater Manchester Police said.
The official threat level in Britain was raised late on Tuesday for the first time in a decade to its highest level, "critical", meaning an attack could be imminent.
Interior minister Amber Rudd said up to 3,800 soldiers would be deployed on Britain's streets, taking on guard duties at places like Buckingham Palace and Downing Street to free up police to focus on patrols and investigatory work.
Police have named British-born Salman Abedi, 22, as the perpetrator of the bombing at the Manchester Arena indoor venue at the end of Monday's concert by U.S. pop singer Ariana Grande, attended by thousands of children and teenagers.
The identities of Abedi's victims were becoming known little by little. They included an eight-year-old girl, several teenage girls and a 28-year-old man.
A Polish couple who had come to collect their daughters after the concert also died, Poland's foreign minister said. The daughters were safe.
"It seems likely, possible, that he (Abedi) wasn't doing this on his own," Rudd told BBC radio. She also said Abedi had been known to security services before the bombing.
Prime Minister Theresa May chaired a meeting of the government's Cobra emergency response committee at her Downing Street office.
Abedi was born in Manchester in 1994 to parents of Libyan origin, according to U.S. sources citing British contacts.
Asked about reports that Abedi had recently returned from Libya, Rudd said she believed that had now been confirmed.
French Interior Minister Gerard Collomb said British investigators had told French authorities Abedi had probably travelled to Syria as well and that he had "proven links" to the IS militant group.
France, which has repeatedly been hit by devastating militant attacks since 2015, extended emergency powers in the wake of the Manchester bombing.
Britain has a national election coming up on June 8 but all campaigning has been suspended since the bombing. Coverage of the attack and its aftermath has pushed out political news from the British media.
It was the deadliest attack in Britain since July 2005, when four British Muslim suicide bombers killed 52 people in coordinated attacks on London's transport network.
The Manchester bombing also left 64 people wounded, of whom 20 were receiving critical care for highly traumatic injuries to major organs and to limbs, a health official said.
As Collomb was speaking in France, Rudd was asked by the BBC about the fact that information about Abedi, including his name, had come out from the United States and whether she would look again at information sharing with other countries.
"Yes, quite frankly. I mean the British police have been very clear that they want to control the flow of information in order to protect operational integrity, the element of surprise, so it is irritating if it gets released from other sources and I have been very clear with our friends that should not happen again."
Asked whether the U.S. leaks had compromised the investigation, she said: "I wouldn't go that far but I can say that they are perfectly clear about the situation and that it shouldn't happen again."
The British parliament, which is usually open to tourists, said it would close to the public with immediate effect due to the increased security threat and the closure would last until the advice changed.
Attacks in cities including Paris, Nice, Brussels, St Petersburg, Berlin and London have shocked Europeans already anxious over security challenges from mass immigration and pockets of domestic radicalism.
IS, now being driven from territories in Syria and Iraq by Western-backed armed forces, claimed responsibility for the Manchester attack, but there appeared to be contradictions in its account of the operation.
The militant group has repeatedly called for attacks on Western countries as retaliation for their involvement in the conflicts in Syria and Iraq.