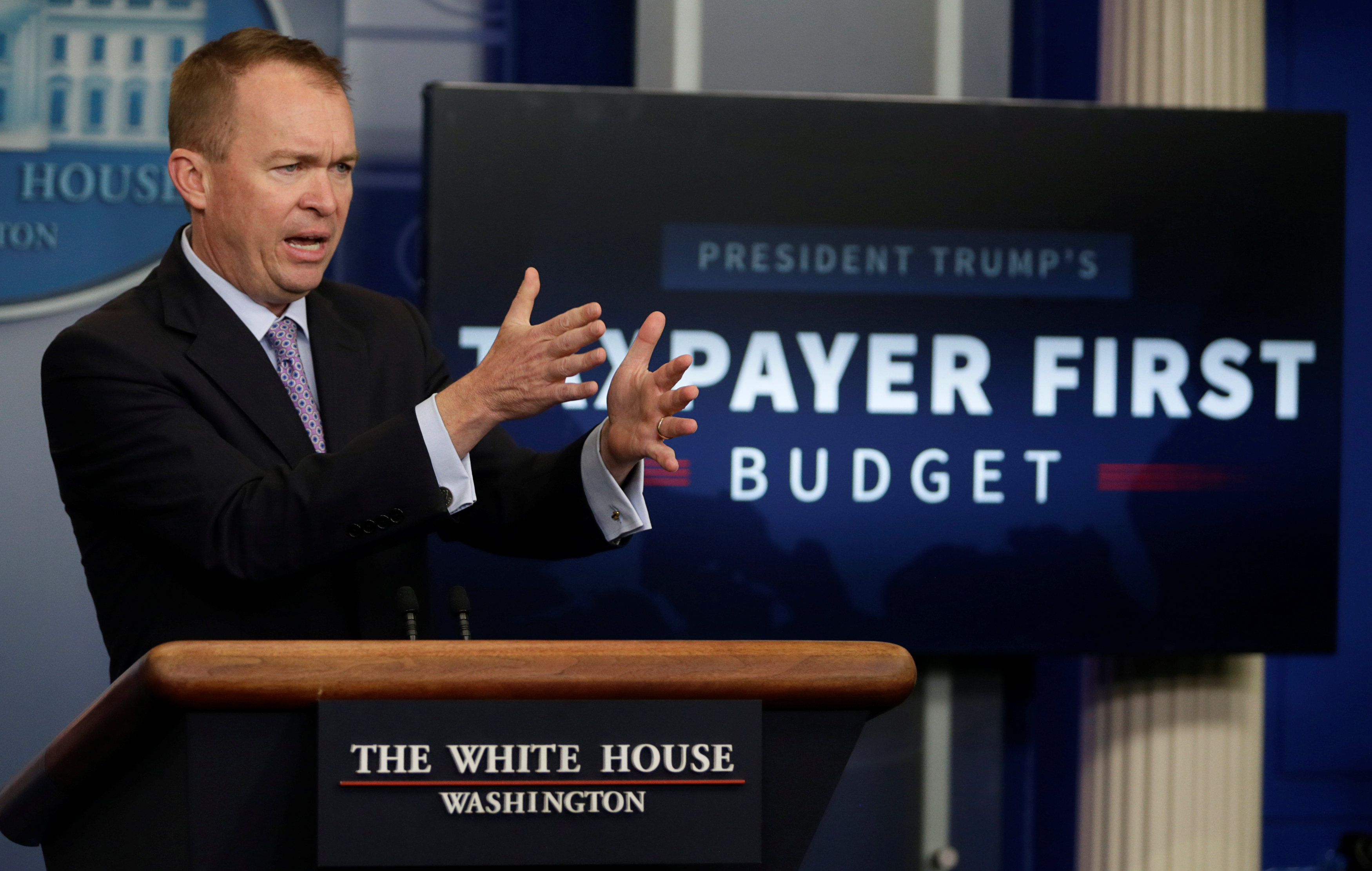 Washington: U.S. President Donald Trump wants lawmakers to slash $3.6 trillion in government spending over the next decade, taking aim in an austere budget plan unveiled on Tuesday at healthcare and food assistance programmes for the poor while boosting the military. Republicans who control the U.S. Congress - and the federal purse strings - will decide whether to make politically sensitive cuts and the proposal in its current form is very unlikely to be approved.
Although it is not expected to survive on Capitol Hill, the proposal puts numbers on Trump's vision of the kind of budget he seeks: One with radical cuts to government assistance to lower-income Americans.
There is some new spending in his plan for fiscal year 2018, which starts in October.
The Pentagon would get a spending hike, and there would be a $1.6 billion down payment to begin building a wall along the border with Mexico, which was a central promise of Trump's presidential campaign.
Trump seeks to balance the budget by the end of the decade, according to the plan.
Trump's proposal foresees selling half of the U.S. emergency oil stockpile, created in 1975 after the Arab oil embargo caused fears of price spikes.
The announcement surprised oil markets, and briefly pulled down U.S. crude prices.
Republicans are under pressure to deliver on promised tax cuts, the cornerstone of the Trump administration's pro-business economic agenda, which would cut the business tax rate to 15 per cent, and reduce the number of personal tax brackets.
But their policy agenda has stalled as the White House grapples with the political fallout from allegations of Russian meddling in the 2016 U.S. election.
The biggest savings would come from cuts to the Medicaid healthcare programme for the poor made as part of a Republican healthcare bill passed by the House of Representatives.
Trump wants lawmakers to cut more than $800 billion from Medicaid and more than $192 billion from food stamps.
Mick Mulvaney, Trump's budget office director, said the plan is the first one in a long time to pay attention to taxpayers.
"Yes, you have to have compassion for folks who are receiving the federal funds, but also you have to have compassion for the folks who are paying it,” he told reporters.
Republican leaders in the House said lawmakers would be able to find common ground with the budget plan.
Senator Claire McCaskill, a Democrat from Missouri, said Trump's plan would devastate rural areas - with the Medicaid cuts directly hitting hospitals and nursing homes - and harm poorer voters who backed Trump at last year's presidential election.
"This is a sea change in terms of how we would look at taking care of the most vulnerable in our country. And frankly it is really going to have a big impact on the parts of my state that were the biggest supporters for Donald Trump," she said.
U.S. stocks trimmed their gains on Tuesday, weighed down by weak economic data, while investors await more details about the budget plan. "Investors are interested simply because it does give an indication where Trump is going to try to influence the agenda and there is some concern over whether he has reduced negotiating power because of his own political difficulties at the moment," said Lisa Kopp, head of traditional investments at U.S. Bank Wealth Management in Minneapolis.
While the budget proposal for national defence increases spending, it falls short of campaign promises for a "historic" hike in military spending amid plans to rebuild the U.S. Navy.
Trump is seeking $52 billion more for the Pentagon as part of an overall defence spending increase of $54 billion.
That is almost 10 per cent higher than current budget caps but only 3 per cent more than what former president Barack Obama had sought in his long-term budget plan.
Trump upheld his promise - for the most part - that he would not cut Medicare and Social Security, two social insurance programmes that deficit hawks have long targeted for reforms.
Those so-called entitlement programmes may not come out of Capitol Hill unscathed, however.
House Majority Leader Kevin McCarthy, a fellow Republican, said lawmakers would have to reform both programmes to save them.
The healthcare bill passed by the House aims to gut the Obama administration's signature 2010 Affordable Care Act, known as Obamacare, that expanded insurance coverage and the government-run Medicaid programme.
But it faces an uncertain future in the Senate, which is writing its own law.
The White House proposed changes that would require more childless people receiving help from the Supplemental Nutrition Assistance Program, better known as food stamps, to work.
Most government departments would see steep cuts, particularly the State Department and the Environmental Protection Agency.
The Committee for a Responsible Federal Budget, a bipartisan public policy organisation, said the plan relied on "rosy assumptions," gimmicks and unrealistic cuts.
"While we appreciate the administration's focus on reducing the debt, when using more realistic assumptions, the president’s budget does not add up," said Maya MacGuineas, the group's president.
Trump's budget relies on forecasts for economic growth of 3 percent a year by the end of his first term - well beyond Congressional Budget Office assumptions of 1.9 percent growth.
The budget plan will boost economic growth by fostering capital investment and creating jobs for workers who gave up their job hunts during tough times, Treasury Secretary Steven Mnuchin said.