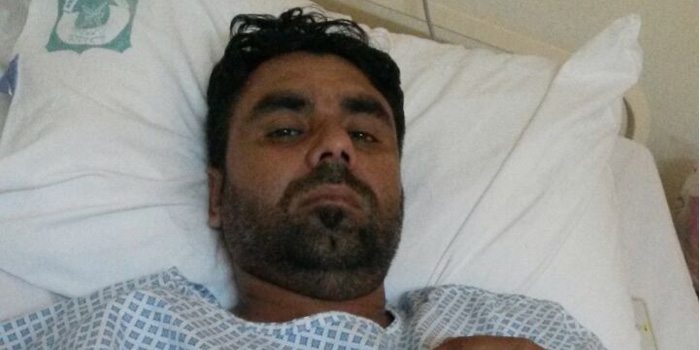 Muscat: A survivor of the latest fatal bus crash on the Muscat to Salalah road recounted the night of terror, which ended in him losing one of his legs below the knee.
Read here: Two dead, one critical in bus crash in Oman
“I was sleeping when the accident happened, when I opened my eyes and gained consciousness, I saw myself thrown off the seat with a part of my leg broken,” said 33-year-old Abdulsattar, talking about Thursday night’s bus accident near Qarn Al Alam in Ad Dhakhiliyah, which resulted in the death of two people and injured several others.
“I didn’t know what was going on, I was in pain, and I remember seeing an Omani family by my side,” he said. “A Pakistani driver named Saleem came forward to help me, and he broke the window glass to get me out. I can’t recall much, but I was made to lie down on one side of the road before being taken to the hospital.
“The part where my leg had broken was bleeding profusely and I was in so much pain, but I didn’t think of the pain because that would make me weak. I tried to keep my will power high and kept reciting verses from the Holy Quran and thought of God, prayed to help me, because God can do everything.”
“Nobody waited for an ambulance for me because the bleeding was constant, so they put me in a ROP car and I was sent straight to the hospital.” A bus driver by profession, Abdulsattar was sleeping in the vehicle, which was involved in a collision with another bus while on the way to Dubai.
According to a source at the Nizwa Hospital, Abdulsattar was brought to the hospital along with 19 other injured, one dead and another critically injured victim. The critically injured person died when he was taken to the operation theatre.
Abdulsattar said, “When I reached the hospital the doctors performed a surgery to amputate my right leg, because it had been damaged badly and could have cause severe damage to my body and would eventually prove to be fatal if not removed.”
His right leg was amputated from below the knee and he also suffered a severe fracture in the ankle of the left leg. “I am from Baluchistan in Pakistan, none of my relatives live here. Some of my friends, who are also drivers are looking after me. I don’t know what to foresee, I only hope that things get better soon, although I can’t work until I am fully treated. I don’t know about insurance claims and I only pray to God to make things better soon.”
Abdulsattar has been driving on the Muscat to Salalah road for about five years now, and although he thinks the road is fine, he feels that large vehicle drivers need to take precautions.
“I have been driving on that road for about four to five years now. The road has single tracks for both routes, and this crash took place at a diversion, and drivers are usually aware of the kind of speed to observe at a diversion, but a lot of times when they flout the rules, this happens. I would also plead to drivers to never overtake at diversions.”